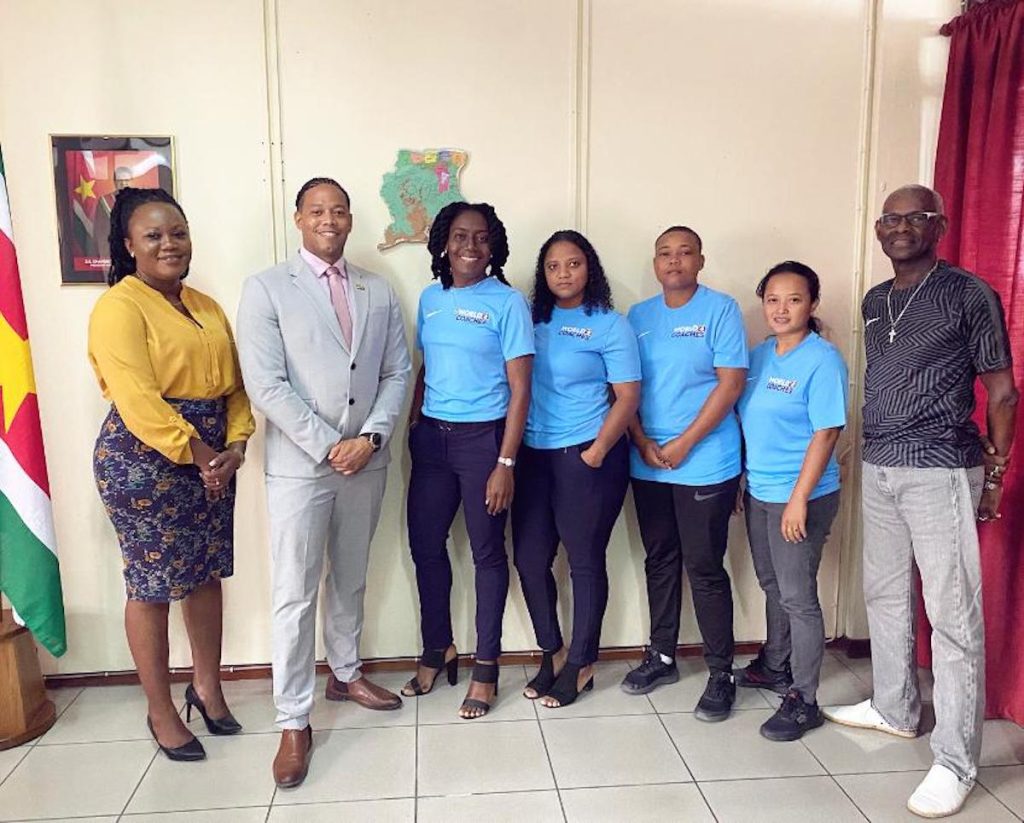 The Sports Affairs Department is taking steps to ensure that women’s sport is firmly established, starting with women’s football. The challenges within the Surinamese sports community for women in sport demanded the necessary attention from Minister Gracia Emanuel and Sporting Director Gordon Touw Ngie Tjouw.

On behalf of the minister, the sports director held talks with various organizations including the Surinamese Olympic Committee (SOC), the Royal Dutch Football Association (KNVB) World Coaches Suriname and the Embassy of the United States of America in Suriname.

Measures have already been taken within the sports affairs department to integrate women on all fronts and involve them in political choices and their implementation. The preferred choice fell on the female deputy director of the sports management team Deborah Winson to follow this path and sit on the gender commission of the SOC.

It has been agreed with the KNVB Global Coaches in Suriname to offer Global Female Coaches the opportunity to organize their own sporting event as part of the Global Girls Day. In addition, efforts will be made to promote women’s football.
During the first half of the year, the KNVB World Coaches Suriname, with the cooperation of the Directorate of Sports Affairs, made additional investments in the Surinamese World Coaches and the two organizations decided to introduce a principle of equality gender 50/50 for participation in KNVB courses. .

The US Embassy Supports Girls in Surinamese Football, through which sports policy is developed in collaboration with the Girls and Sports Affairs Policy Team for Women’s Football in Suriname.

According to the director of sporting affairs, there are even more positive developments for women in sport. From the policy of sports diplomacy, more and more exemplary sportswomen on the charts are identified, named and deployed such as; Maureen Tilborg-Bulo (swimming), Pearl Gerding (karate) and Carolina Vera Vera (tennis).

The foundation of women in sport must first be high up and visible to the ministry before they come out on top. For this reason, the first step will be to position women and establish criteria for gender equality in nominations and grants. So far, this has been well received by various sports organizations and sports associations. However, the management will not impose the women’s sports policy on sports organizations and sports associations.

Sports Director Gordon Touw Ngie Tjouw said the Sports Affairs Directorate or the Ministry of Regional Development and Sports will set the right example and set the trend for Surinamese girls and women in all sports.