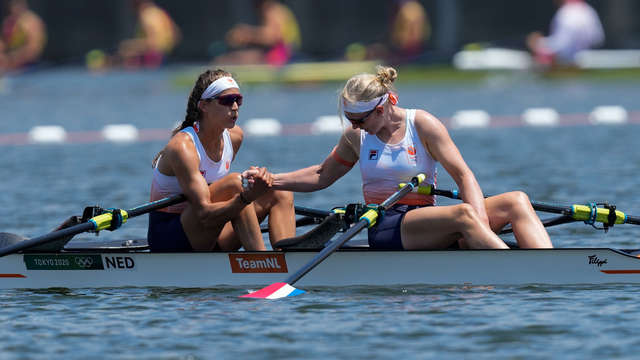 Scheenaard and De Jong had to put up with Canada in the first part of their race, but took the lead in the final phase. The semi-final victory was never in danger in the last hundred meters. Behind Canada (7.09.44), the United States (7.11.14) came third.

Rest and Confidence
“I think it wasn’t perfect yet, but it was a race where things just fell into place,” said Scheenaard. “We actually didn’t expect to overtake the Canadian boat so easily in the last 500 meters. We really expected a sprint to the finish. It gives peace and confidence for the days to come.

Against the wind
Earlier in the week, Scheenaard and De Jong were considerably faster and that had a simple reason, according to the two: the wind. “Now we had the wind against us and the last time with us. It makes a big difference,” said De Jong.

Men
Melvin Twellaar and Stef Broenink also qualified with the fastest time in the men’s pair. The duo finished after 6.20.17 and were much slower than on Friday when they rowed an Olympic record (6.08.38). Behind the Dutch, China was second (6.23.11) and Switzerland third (6.25.89).

Cocktail
“We were confident, we stayed focused and executed our plan,” said Twellaar, who was not expecting a better time ahead. “The wind has a huge influence on the lap times. You can’t row a record against the wind. You have to have the right mix of wind and hot water.” Broenink: “This trail is quite difficult. I don’t expect a lot of fast times. But you just have to cross the line first.