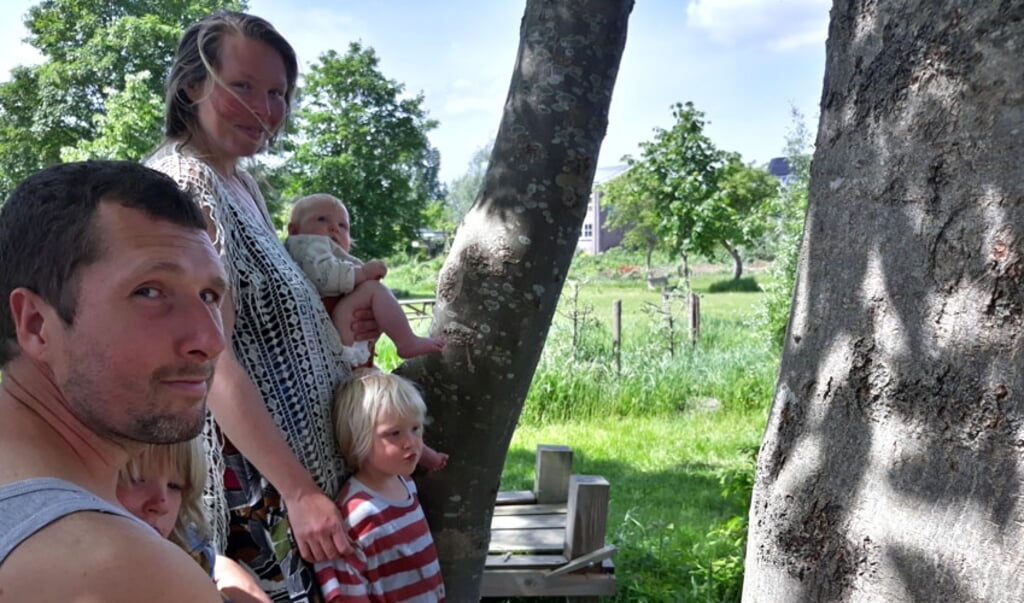 (by Maarten van Gemert)
BRUNNEPE – The initiator of ‘De Groene Brunneper’, the food park north of Brunnepe, has to let go of his ‘baby’. Robert de Reu will move to Zeeland next week for work. Three successors are in sight for the management of the food park, which he manages with his wife Lotte and a few volunteers. Robert describes the situation as a “double feeling”.

After the expansion of the family in recent years, there really has to be bread on the table. Finding suitable and paid work in the region is not possible, so Robert leaves for Zeeland. A wish that he already caressed with his wife Lotte. He leaves behind a Belter Bongerd that he transformed from a dilapidated orchard into a thriving food park.

green lung
Together with the Brunneper Bongerd on one side of the Beltweg, the Belter Bongerd between the Beltweg and Marina De Riette forms the “green lung” of Brunnepe. The area west of the Beltweg, which escaped building plans in the past, is currently being turned into a walking park by the municipality. On the east side, Robert took the initiative (citizen) to transform the old orchard of Aalderink into a park with edible plants and shrubs.
Four years ago, he presented his project on site to the municipality, which responded kindly. With the same benevolent cooperation, a full-fledged food park was created under the name ‘De Groene Brunneper’. In the Kamper Stadspark, Hanjo IJkhout followed with a food park in the Green Heart.

Mixed feelings
In an interview with Camper News Robert speaks of a “double feeling”. His family is from Zeeland and he loves embarking on a new “adventure” there. On the other hand, in recent years he has become strongly associated with “his” food park, which is actually located behind his house on Geert van Woustraat.
But despite the positive attitude of the municipality of Kampen, the food park does not receive a subsidy and the position of manager is not converted into paid employment in any form. Working directly at the municipality is not possible for Robert here either. In Middelburg, however, where he will now put his passion for nature at the service of the municipality. Lotte adds that nature in Zeeland is purer and she wishes for her children, who are currently between 5 years and 4 months old. She disapproves of the “plastic air” that regularly hovers above the bongerd of a company further down the Industrieweg.

Naturally active
All kinds of initiatives are developed at De Groene Brunneper. The scythe brigade is authorized to trim the grass and old varieties of trees have been planted with the pomological association. Nurseries or nurseries are regularly hosted and in principle everyone is welcome, first of all people from the neighborhood. The playground between the park and Steenovensedijk has also undergone a “natural metamorphosis” and there has been a wandering library for years.
Despite all this, the work is not yet finished, notes Robert: “The Groene Brunneper is in a transition phase. Anyway, he leaves and passes the baton, no, the hoe.