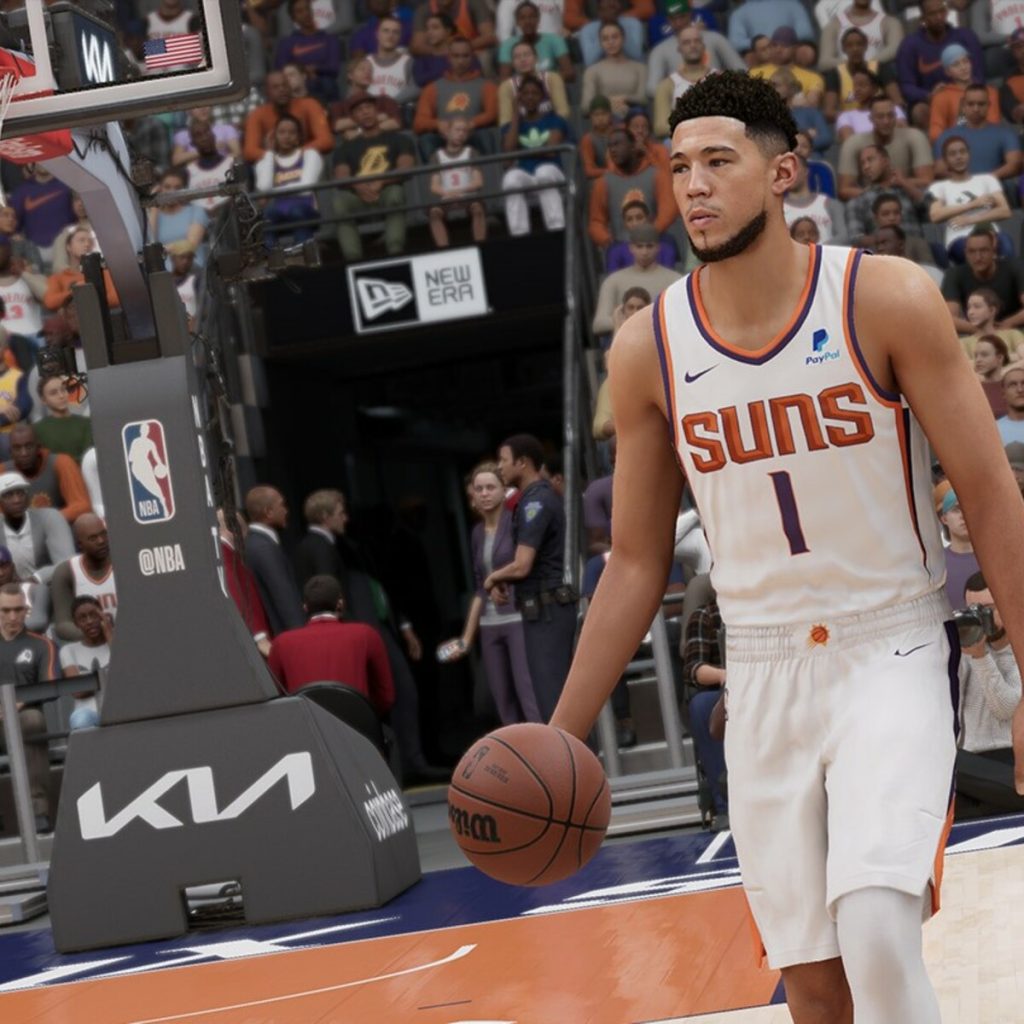 Review | NBA 2K23 – 2K releases a new game every year based on one of the most watched sports in the United States: basketball. 2K Games has a reasonable monopoly in this regard, but despite this, the publisher tries to provide the game with enough innovation each year to justify a purchase. Although there is a trend when it comes to annual games, where for many the new release is more of a glorified roster update than a new game in its own right. Whether that’s also the case for NBA 2K23, we’ll find out together below.

As is often the case, we start in MyCareer mode and like other years, you start by building your own player. Every choice you make about your height, weight, and wingspan will affect your potential. As a small player, your dunk ability isn’t very good, although 3-pointers are one of your most dangerous weapons. Where the game goes in a different direction than in previous years, you’ll be thrown into the NBA immediately after. No more high school and college competitions, but directly at the highest level. This has its advantages, but also its disadvantages. One advantage is that you can immediately start working for your favorite team, although realistically your player won’t be able to compete at that level yet. 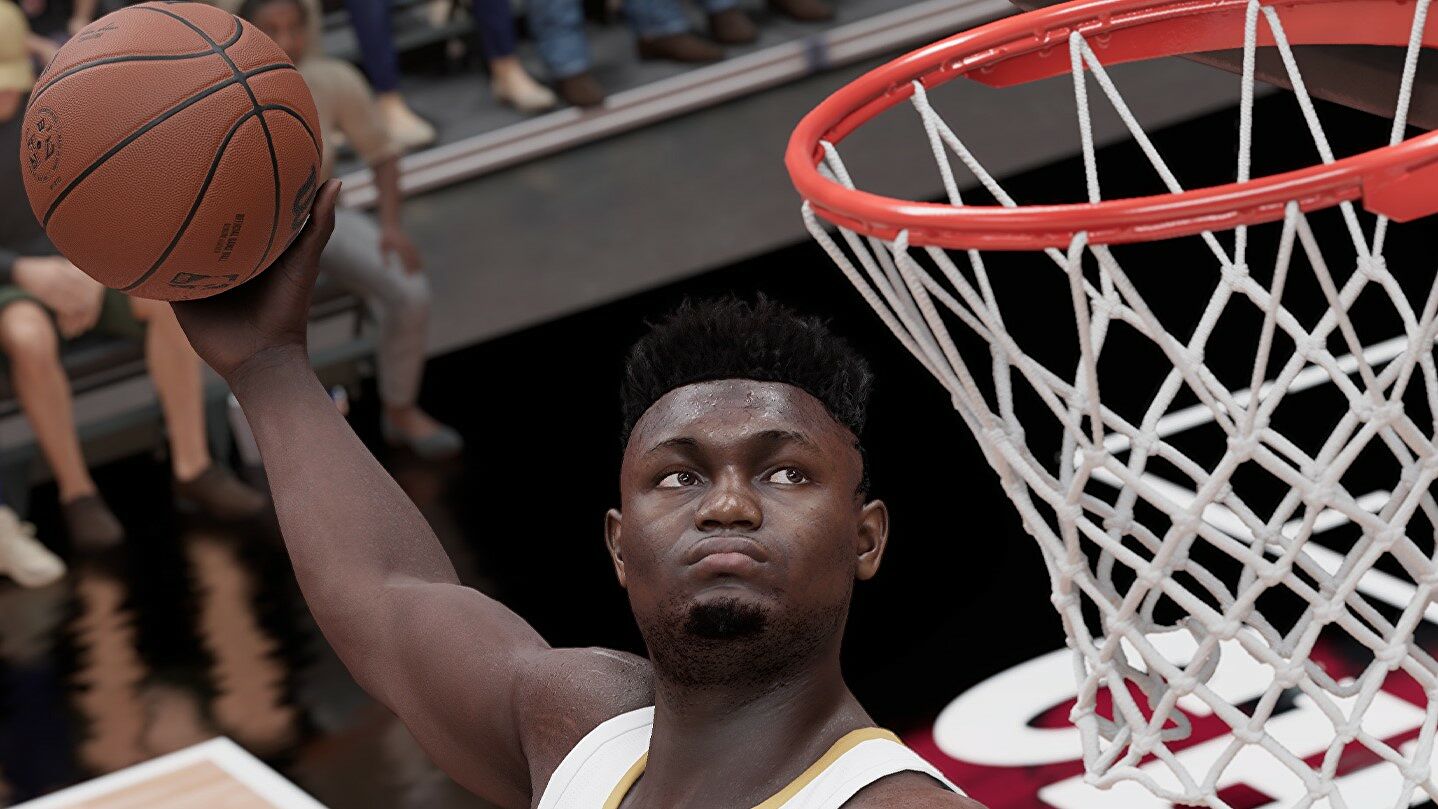 You will be drafted 18th in the first round by a team of your choice. It’s good that you end up in the NBA, but the fans (of the game) actually wanted another player named Shep Owens. They make it very clear from day one. From booing during the draft and games to being scolded on social media. It’s up to you to convince the city that your team made the right choice. To do this, with a select group of people by your side, you will not only have to perform on the field, but also make the right choices on social networks. You have the choice to react violently in the media to whatever comes your way, but you can also choose a calm and constructive response to try to calm things down. Good matches naturally attract more fans, just like influencers convince by talking to them. This in turn can lead to a change in fans’ feelings towards your player. It’s definitely a fun new foray from your standard road to glory storyline.

The City also has a nice update. The town is a bit smaller than last year, which makes it a bit livelier. You will be able to visit the shops again, visit the gym or go to the stadium for your match. These moves are done on foot, via your skateboard, or with the surprisingly fast fast travel system. Unfortunately, the journey through the city sometimes does not go as smoothly as many other players are loaded. The framerate sometimes dares to dive. Also, the skateboard was invisible to us most of the time, leaving us hovering about eight inches above the ground, and otherwise quite clunky to handle. As mentioned earlier, the rapid transit system is fast, so you enter the metro, choose another metro station, and appear there almost immediately. There are also plenty of other smaller side missions to complete, such as a match three or a quest where you need to complete a certain training drill. So there is certainly plenty to do in the city. Of course, the game has more than MyCareer mode, a new Jordan Challenge has also been added, where you progress through the career of one of the legends of the sport in 15 scenarios. This gives you three objectives in each scenario, which you must complete. You earn stars per goal and if you reach 40 stars you get a Michael Jordan tinted reward. This mode is set up in a documentary style, which immediately reminds us of the Netflix series ‘The Last Dance’. There’s also a graphics filter on games, which makes the mode feel authentic and makes you feel like you’re watching a basketball game twenty or thirty years ago.

The game also features the regular “My NBA Eras” career mode, where you must lead a team to the top of the sport. It’s similar to the mode we know, but unlike other years, you will not only be able to choose from today’s teams, but also from teams that are part of The Magic vs Bird Era, The Jordan Era and The Kobe Era . This adds a nostalgic touch to the mode, although you can also just play in The Modern Era. It’s very nice to have a different starting point when it comes to managing a team and the number of teams that can be chosen has also increased accordingly. However, we have found that there is not much innovation in the mode otherwise you can now just play career mode in several key eras of the sport.

Finally, we have the MyTeam mode. You open packs to build the strongest team possible. With this team you can then compete against other players, although there is also the option to compete offline against the AI, which then has a team of any other player. Starting this year, you can also play Clutchtime against the AI. This is a regular match, with the shot clock reduced from 24 to 14 seconds, making matches even faster. Ideal for the adrenaline junkies among us. In general, playing online is fine, but there may be lags from time to time. It can be a bit annoying sometimes, but luckily it doesn’t happen too often.

As stated above, there’s something for everyone when it comes to how you want to play the game. It’s mostly on the pitch that the little changes make all the difference. The game speed has been reduced a bit, so you’re playing more of a tactical basketball game than an arcade experience. On the higher difficulties, a little knowledge of basketball tactics is essential, otherwise you won’t find many openings in the opposing defense. Don’t worry, as a beginner you can easily find your way to victory at the lower levels, because then the AI ​​won’t always make the best decision in terms of offense and defense. Another nice change is the addition of three adrenaline boosts available to you per possession. Each dribble or effort will cost you one of the boosts and you will need to pass the ball to another player or shoot to complete these boosts. This is a nice improvement, because now the opponent – mostly in online games – can’t spam skill moves all the time, but will have to think about their games. 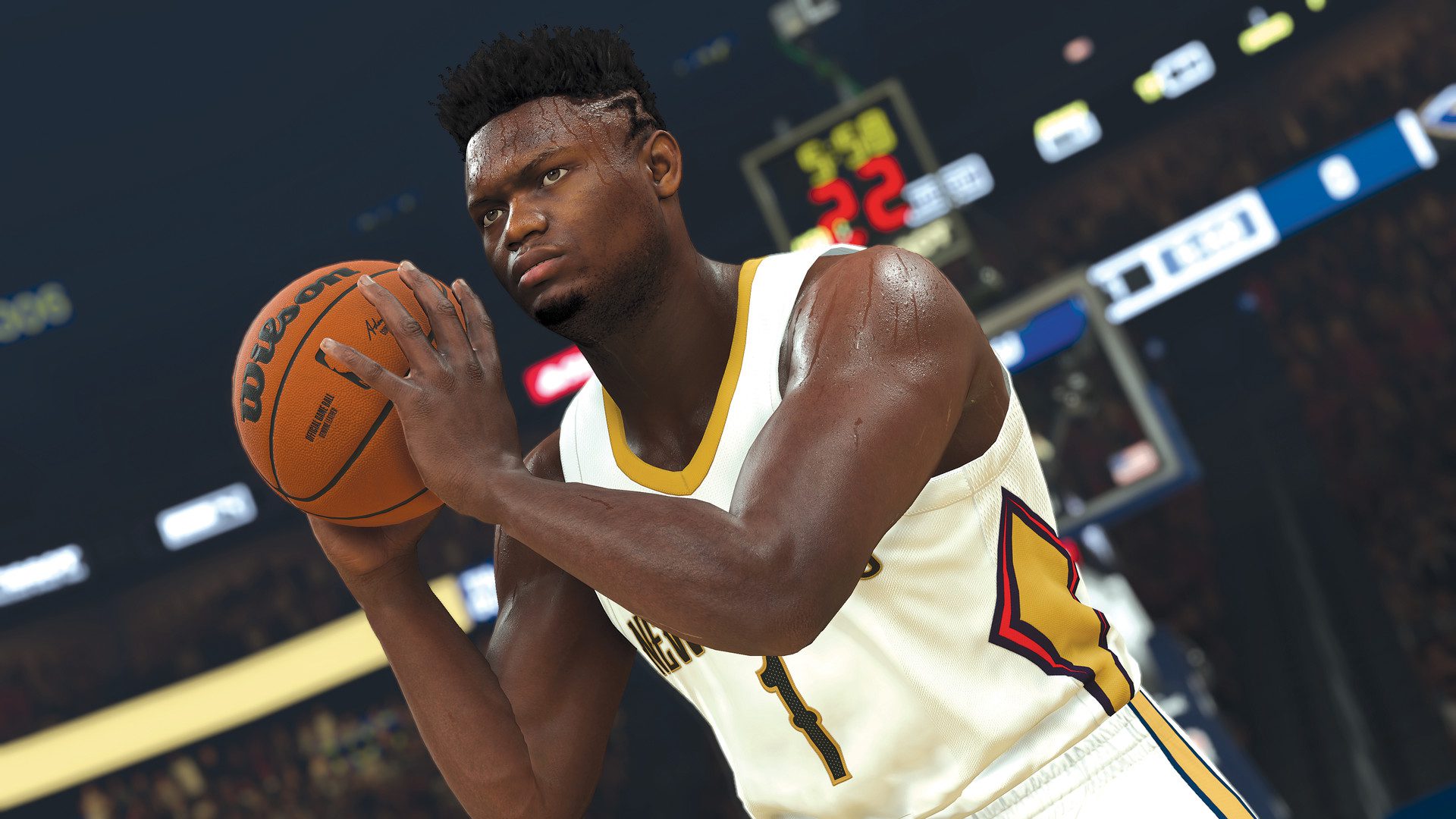 Defending has been made a bit more difficult, with the result that you’re mostly concerned with trying to block the opponent’s shot for as long as possible, in the hopes that they’ll shoot in a hurry due to the tick- tac from the shot clock and will miss. Attempting to steal the ball from the opponent is more likely to result in a defensive foul than a rebound. It could have been a bit easier for us, as it’s a bit more boring to wait for the opponent to shoot, compared to actively trying to get the ball. However, movement with the DualSense controller is intuitive and fluid, making gameplay fun and enjoyable. Adaptive triggers and haptic feedback also help. Adaptive triggers kick in when the player is fatigued and ensure that hitting your sprint button (R2) will be much harder if your player is fatigued. The haptic feedback is like last year, it’s good that it’s in the game. You feel your player’s contact with an opponent, as well as the contact with the ring.

A feast for the eyes and something with an elephant

Graphically, the game is again very elegant, as usual. This ranges from facial animations to the overall layout of the game. NBA 2K23 runs in 4K at 60 frames per second, which makes for extremely smooth gameplay. However, as mentioned before, it was different in the busy parts of town. Unfortunately, we have to report that the game crashed several times, forcing us to replay the entire game. This always happened during halftime and in various MyCareer matches, but not in other modes. Moreover you have hHere and there also a graphic imperfection, like the invisible skateboard or the sweat that seems to flow from your arm like a wave, while your head is completely dry. Despite this, in general it is and remains a beautiful game to watch.. The audio design is also top notch, a match in a stadium sounds very different than in the training hall and the soundtrack and commentary are equally impressive. This soundtrack is quite catchy, so you’re ready to dominate a basketball game, and the commentary sounds so realistic, you’ll feel like you’re actually watching. 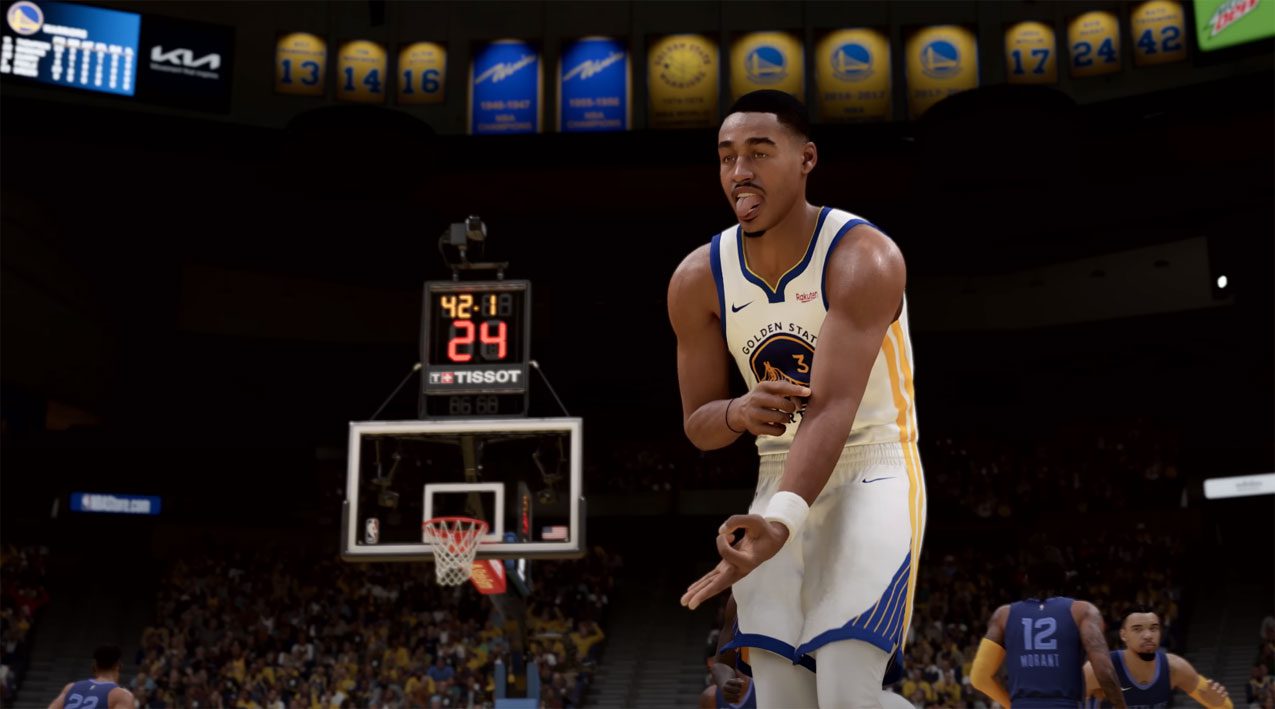 Let’s also talk about the elephant in the room: microtransactions. These are back in full force and the gravel is maybe even a little worse than last year. Intuitively, the prices for everything have gone up a bit, while you seem to be earning a bit less in-game currency (IC) when you win matches. If you want a team in MyTeam that can compete with the opponent, you will either have to play a lot of basketball games or choose the quick payment method. In-game currency is also integrated into MyCareer. Do you want to develop your character? This will cost your VC. Do you want to buy a pair of shoes for your player? RESUME. Do you want to get tattooed? CV again. When starting the game you’ll also still see the MyTeam announcement and the subtle product placement manipulation is clearly not for 2K, since your Gatorade is really all over the picture and you’re literally given the task at the start of pick up a bottle. get the stuff at the store.

NBA 2K23 is definitely another step forward when it comes to gameplay. Everything is a bit slower and thanks to the addition of a new system, where a player is limited in the number of moves or moves, the game is less arcadey and tactics play a bigger role. Can’t complain about the number of modes, with the MyCareer and Jordan Challenge as highlights. Graphically, the game looks great again, but with some minor issues. The game plays very well, especially in the single player modes and only in certain places in The City and during some online games, the framerate sometimes dared to drop and threw a spanner in the works. Unfortunately, the game had several complete crashes for us, forcing us to replay a match. Still, NBA 2K23 is one of the best basketball games out there, it’s just a shame that 2K takes microtransactions to an all-time high every year. If you don’t mind, you’ll have a great time.