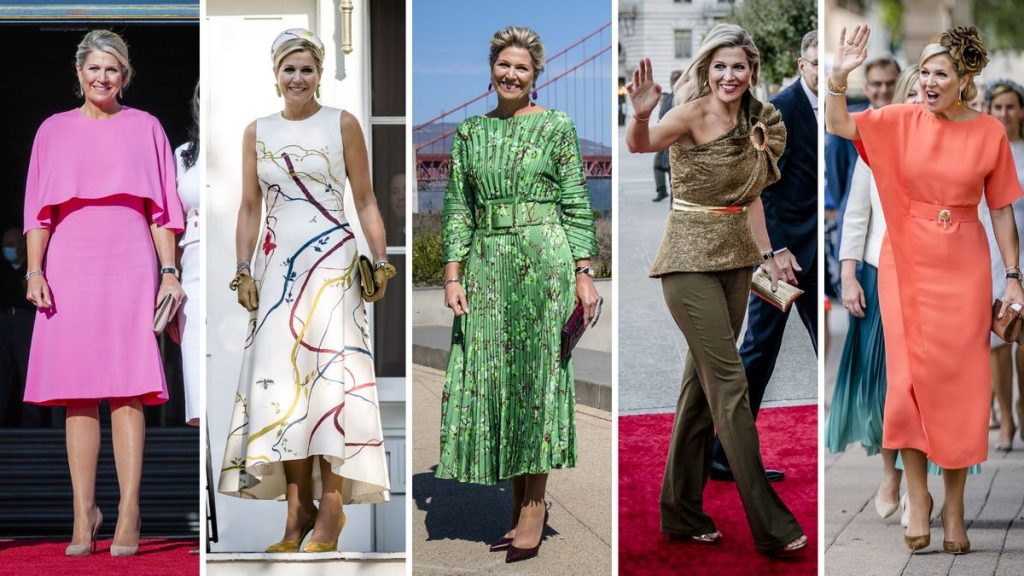 Last week, from September 6 to 9, Queen Máxima paid a working visit to the United States on economic relations. Queen Elizabeth died during her visit aged 96. As a result, news regarding Máxima’s solo trip has snowed a bit. King Willem-Alexander would also be the first, but was forced to cancel due to pneumonia. Back to the program and fashion.

Queen Máxima begins her journey on Tuesday with a visit to San Francisco City Hall. There she raises the Dutch flag with Mayor London Breed. The day continues in the Castro district. Many people live here who are committed to equal rights for LGBTI people. The queen takes a lot of time for them and sends company greetings from King Willem-Alexander.

In the afternoon, Máxima will sign a document on the fight against climate change. After that, she expressed her wish for more cooperation between the Netherlands and California.

The pink dress that Queen Máxima wore during the day comes from her favorite fashion house Natan. We’ve already seen the dress during the King’s Day celebration in Maastricht earlier this year.

On Tuesday evening, Máxima will once again give a speech at the town hall. Here, she says she admires the Californian mentality: “Don’t wait for circumstances to force you to act, but rather take matters into your own hands.” It may seem risky at first, but in the end it makes you stronger, according to the queen.

Máxima wore a gold outfit by designer Claes Iversen on Tuesday night. We’ve seen this costume many times: at the Holland Festival in 2019 and on his 49th birthday in 2020.

On Wednesday, Queen Máxima begins her day at the University of California, Berkeley. Prince Friso and Princess Laurentien studied at this university. The school offers a study of Dutch. Máxima spoke to students and teachers about the study. After that, she briefly took a look at the famous Golden Gate Bridge. The program continues with a visit to Google where the subject “challenges of the future” is central.

In a Dutch school in Silicon Valley, the queen is showered with gifts from children. She received several drawings, cards and even a chocolate tulip. Máxima says she will “treat” this last present. The queen also wanted to know how the children experience life in California. “A lot of sunshine and very hot I think,” she said.

Queen Máxima again opted for a Natan dress on the second day of her visit. We’ve already seen the creation twice when she paired it with a large hat. The first time was during a regional visit to Salland. Almost a year later, at the Four Freedom Awards in Middelburg, the dress reappeared.

After spending two days in California, Máxima flies to Texas. A meeting with Governor Greg Abbott is on the agenda. Máxima receives a pair of cowboy boots from him. The Queen was visibly excited and said her first pair of heels were also cowboy boots.

Thursday continues with a visit to Austin City Hall. Máxima then pedals with Mayor Steve Adler along the Colorado River to the next location: a library.

Máxima previously wore this dress, by Natan, during a visit to Germany in 2021.

In the evening, the queen, dressed in a new outfit, visits the stadium of the football club Austin FC. There she is updated on the Dutch lamps that allow the grass to grow and cool down sustainably. Subsequently, the Queen was present at the signing of a cooperation agreement between Austin FC and the club PSV of Eindhoven.

Queen Máxima will end her working visit Friday in the city of Houston. At the town hall, she is welcomed by Dutch children who, like the queen, were dressed in orange.

On a boat trip on the Buffalo Bayou, Máxima learns all about the measures Houston has taken to prevent flooding. After that, the Queen visits a medical center that focuses on innovative cancer treatments. Máxima speaks there with children who are being treated for the disease.

Queen Máxima was dressed in an orange Natan dress for Friday’s opening act. She wore this model for the first time during a regional visit to southeast Friesland in 2020. A year later, in the summer of 2021, we were able to see the dress again when Máxima opened a burgh in Amsterdam.

The visit to the United States finally concludes with a reception at the Museum of Fine Arts. Here, Máxima gives another talk under the watchful eye of Dutch and American companies in Texas.

Afterwards, Queen Máxima told the Dutch press that she had had a good discussion about the abortion law. She voiced her support for the agency to conservative Governor Greg Abbott. Máxima says to Texas women the same thing she would say to other women: “women should try their luck”, and have the right to freedom of choice.

Máxima wears a floral jumpsuit from Seren on the final leg of her journey. We have seen this outfit on the queen many times before. She wore the pantsuit in 2020 on King’s Day and in 2021 on Special Olympics The Hague.