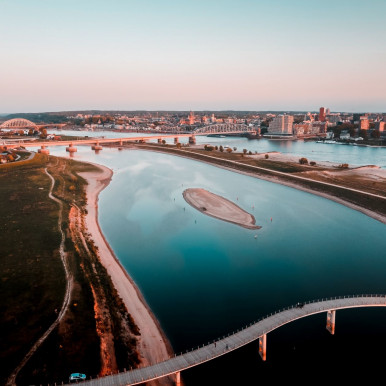 “No regrets” is one of the starting points when designing hydraulic structures. To learn from past experiences, Deltares and TU Delft launched an inventory study on what made previous projects more or less successful.

You would think that anyone who builds a bridge, a levee or any other work of art over water hopes to come back with pride later on. But in the world of hydraulic engineering, another factor is almost even more important, namely that the developers do not regret their constructions afterwards. Under the motto “no regrets”, Rijkswaterschap, water boards, provinces and municipalities now pay a lot of attention to minimizing the risk of regret.

But what exactly do we mean by regret in this context? And what could the builders of water and bridges regret? To clarify this, the research institute Deltares and TU Delft have a exploratory research composed of interviews with six people with a wealth of experience in civil engineering, infrastructure planning or land use planning. What works of art do they regret and why? And what are they proud of?

Regret is often linked to the lack of an eye on the future when designing a work of art, emerges from this inventory. This can, for example, lead to very high maintenance costs or long-term damage to nature or the environment.

Looking too closely at the destination of a work of art is also regrettable in retrospect: after all, not only the intended target group, but also other users of public space have to deal with the new configuration of the landscape.

An example of the latter is the Waalkade in Nijmegen, explains interviewed engineer Bas de Bruijn, who has always worked for water boards, in the report. When it was necessary to improve the construction of a retaining wall there, the water retaining elements were no longer connected to the walls of the restaurants, but placed three meters in front.

De Bruijn: “Before this improvement, you didn’t have to have a heart attack during high water, then an ambulance couldn’t get through. There is now space behind the retaining wall and you can also build it more easily. And if there’s no high water, you won’t see it.

Engineers take pride when the above things have succeeded: if the structure is useful for everyone, is durable – so continues to function in a changing future – and has proven to be beautiful too.

Sometimes engineers also mention a law or a plan, when asked what they are proud of. Like the Water Act, which mandates that all primary flood defense systems be tested against safety standards once every twelve years.

This prevents damage and weak points from becoming visible until it is too late or it has become very expensive to fix them. But big, high-profile projects like Room for the River are also mentioned.

De Bruijn in the report: “If you take a big step all at once, you don’t have to take many small steps afterwards and they often need to be less drastic. My position remains that you should have the courage to look a little further into the future.

“It is very difficult to implement very drastic measures that you cannot yet make rock solid with a lot of social resistance. But where it is useful and necessary, you have to dare to do it. Our children will be happy with that.

If you found this article interesting, subscribe to our free weekly newsletter.