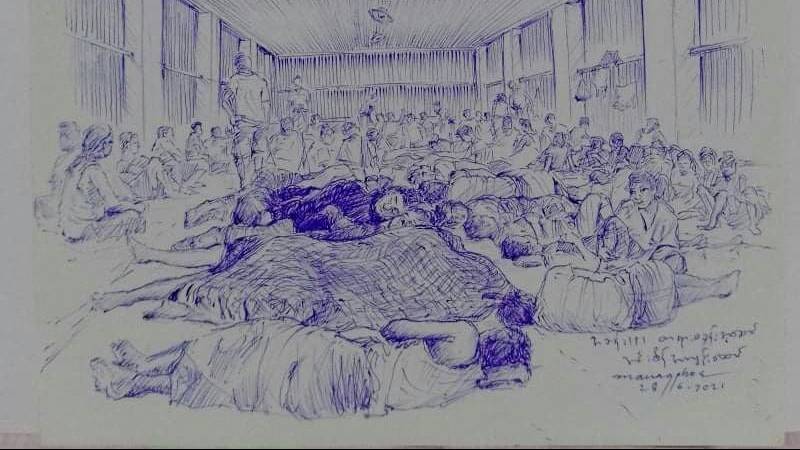 “We are no longer humans behind bars,” said 24-year-old Nyi Nyi Htwe. He smuggled the drawings in October when he was released. He was imprisoned for several months for defamation, allegedly wrongfully.

Another inmate describes the dirty toilets. “And there were flies in the food. Anyone who couldn’t afford a place to sleep had to spend the night next to the toilet bucket.”

The prisoner who made the drawings did so between April and July last year. He was later released but refused to be questioned. He also wishes to remain anonymous for fear of being arrested again, he told Htwe.

The sketches were a birthday present for Htwe. He says the artist asked the prisoners for permission to depict them. Wherever he goes, he draws prison scenes. He would feel comfortable drawing.

One of the drawings shows about sixty people in the same room, lined up next to each other or against the wall. Htwe says he was in a room with a hundred others. “We slept within a fingertip of each other.” He saw prison employees beating inmates with sticks.

Earlier stories of prison abuse were also published. Anonymous prisoners reportedly handed a handwritten letter to a human rights activist. He reportedly smuggled the letter out of prison in February.

According to sources that Reuters cannot confirm, the letter contains several examples of medical negligence. This is how the stunned people would not have been treated. In addition, a person who suffered a stroke and became paralyzed would not have received medical treatment.

Insein Prison, the largest prison in Myanmar, was built in 1871 by the British colonizer. The vast majority of detainees are incarcerated for opposing the junta.

The prison is intended for a maximum of 5,000 inmates. More than 10,000 people are currently detained, according to an organization monitoring the situation of political prisoners in Myanmar. Reuters was also unable to verify this.

The army, now in power in Myanmar, after having democratically elected leader Aung San Suu Kyi did not respond to repeated requests from Reuters to comment on the drawings. Several aid and human rights organisations, including the Red Cross, told the news agency that they were not allowed to go to jail.