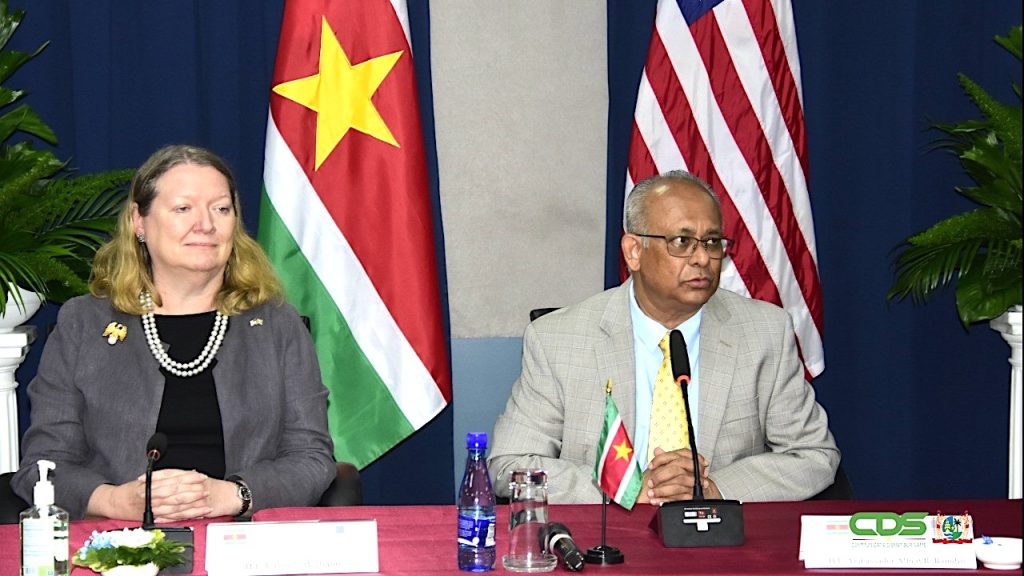 Almost a year after their first bilateral conversation, Suriname and the United States reconsidered their relationship during the second edition of this annual consultation. The second bilateral meeting between the two countries’ representatives was held today at the Ministry of Foreign Affairs, International Trade and International Cooperation (BIBIS).

Minister Albert Ramdin looks back with satisfaction. According to him, Suriname and the United States have an equal relationship, which benefits both countries. U.S. Ambassador Karen Williams says the bilateral dialogue is an extraordinary opportunity to assess the cooperative relationship.

Bilateral talks are a high-level meeting based on cooperation between the two countries. Apart from Minister Ramdin, Suriname Ministers of Finance and Planning Surmond Achaipersing and Defense Minister Krishna Madora were also present. On behalf of the United States, Ambassador Williams joined Barbara Feinstein (US Assistant Secretary of State) and Clinton White (representing USAID, the US development agency in the Western Hemisphere). The two of the latter officers took part in the conversation almost last year.

According to Minister Ram, the annual consultation is aimed at assessing the relationship in different areas. The delegates are therefore considering operational cooperation in areas such as politics and diplomacy. The arrival of senior officials was also discussed, and as a result, President San Diego will attend the US Summit in Los Angeles in early June.

The parties reviewed the security cooperation and it will continue. There is also an assessment of US support during the COVID epidemic and negotiations between Suriname and the International Monetary Fund (IMF).

Minister Ramdin: “We have a good relationship with the United States. It is not just a political relationship, it is an equal relationship in which we certainly benefit from cooperation in different areas. The Minister mentions sectors such as education, health and trade. “We see many more American companies showing interest in Suriname, and we can work together in many areas,” the BIBIS Minister said.

An overview of the areas of cooperation will be provided shortly, confirming what the financial benefits are for Suriname. Minister Ramdin emphasizes that this dialogue is part of the recovery and intensification of the relationship with a key partner in the Western Hemisphere. When Suriname assumes the leadership of CARICOM, President Chandoki will have a specific responsibility to discuss important issues for the Western Hemisphere with the United States. “The United States plays a key role in all these developments, so we have a lot of contacts with the United States and other countries in the region.”

Ambassador Williams sees the conversation as a great opportunity to exchange ideas about the relationship and explore how to strengthen or enhance it. The United States is looking forward to welcoming President Santoki to the summit in June, he said. According to the diplomat, this will be the right time to discuss cooperation.

The U.S. ambassador continued to think about US involvement in recent times. He looked back for support in negotiations with Defense, Health, Govt-19 and the IMF. Ambassador Williams was surprised to have cooperation in so many fields. All of this, he says, only contributed to a strong relationship.