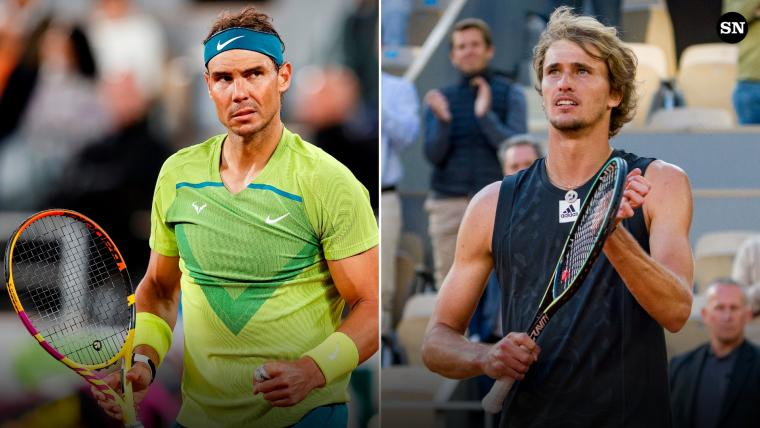 Rafael Nadal has played enthralling matches throughout 2022, winning a record 21st Grand Slam at the Australian Open, making his final appearance at Indian Wells against Taylor Fritz, and engaging in superb performance across all tournaments.

It’s hard to disagree that Nadal is the most dangerous player on red clay since he has won 13 championships at Roland Garros. On Tuesday, Nadal silenced his detractors by defeating his longtime adversary and reigning French Open champion Novak Djokovic in a riveting quarterfinal match.

While the Spaniard continues to dominate on clay in Paris, his next opponent, Alexander Zverev, is attempting to win his first Grand Slam title in the French capital. The German refined his art to perfection in a grueling four-set victory against the youthful phenom Carlos Alcaraz. The big 25-year-old ran through the gears to defeat the youngster and ultimately demonstrated why he is the world’s third-best player.

This Friday, Nadal and Zverev will face off in a nerve-wracking French Open semi-final match. People who bet on sports are often eager to foresee and place their best bets. The following factors should be considered while placing high-quality bets.

Nadal entered the French Open as the overwhelming favorite, and for a good reason: he has won the championship 13 times and has no plans to stop. Last year, the fifth-ranked player in the world was defeated by Novak Djokovic in the semi-finals of this tournament.

In contrast to his flawless performance in the Australian Open, Nadal suffered in the lead-up to the French Open. The former world number one almost lost to David Goffin at the Madrid Masters before defeating his compatriot in the final-set tie-break before being eliminated by the highly regarded Carlos Alcaraz in the quarterfinals.

Nadal seemed to be a pariah in the Indian Wells final against Taylor Fritz, admitting to an injury as he was swept in straight sets. Denis Shapovalov of Canada defeated Rafael Nadal in Italy, denying Nadal a spot in the quarterfinals.

This year’s French Open has been a very different tale, with Nadal gliding through his first three rounds until facing the tenacious Felix Auger-Aliassime, who gave him a lung-busting five-set struggle. Next up was Novak Djokovic of Serbia. Nadal defeated his long-time opponent in their 59th match, 6-2, 4-6, 6-2, 7-6(4), playing some of the finest tennis of his career.

Zverev has had a turbulent year, making headlines for an outburst at the Mexican Open, receiving a $40,000 fine, and generally not reaching his full potential. He was defeated by Carlos Alcaraz in the Madrid Final, broke apart against Stefanos Tsitsipas in the semifinals, and has been in the unpredictable form of fate.

The French Open has provided this towering German with an opportunity to restore his form. Zverev breezed through the first round, survived a scare in the second, prevailed in the third and fourth sets, and then played a lung-busting five-set encounter against Carlos Alcaraz, displaying spellbinding tennis. The No. 3 seed will face Nadal in his next round, and a win against the clay-court specialist will seal the German’s legacy at Roland Garros.

Rafael Nadal enters the competition at -312  in the Coolbet betting markets, whereas German Zverev is at +267 as an underdog. It’s clear why Nadal is the overwhelming favorite, and he is determined to win a record-setting 14th championship in Paris. Zverev, who is also an agender, is anxious to get his name on the Grand Slam board.

Alexander Zverev is in excellent shape, but it’s tough to compete with “The King of Clay” when he is on a mission. The Spaniard has had a great deal of success in Paris and is eager to finish his career on the surface in the competition he loves.

Zverev is no pushover, and he’ll be out to make an impression at the French Open. We anticipate that he will be pushed by the German and will win by more than 1.5 sets.