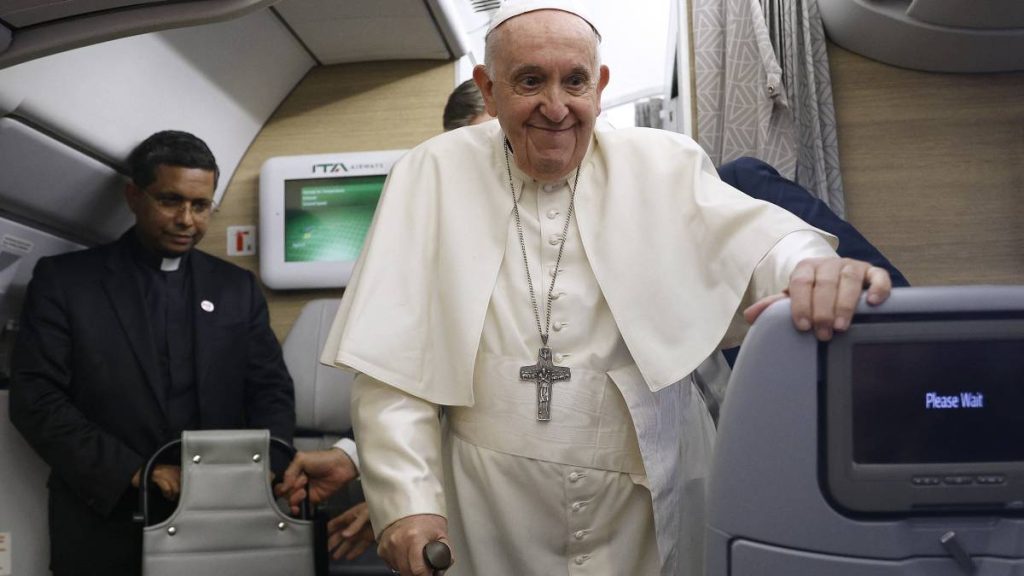 Pope Francis is taking it easy due to his age and health issues. He told reporters that after a six-day visit to Canada. “I don’t think I can make as many trips as before,” the 85-year-old prelate said aboard the papal plane. The trip was “a bit of a test” for him.

The 85-year-old head of the Roman Catholic Church said his papacy had entered a “new, slower phase”. He is not thinking of resigning for the moment, he stressed, but “the door is open”. “Until today I haven’t used the gate. I haven’t seen the need to consider this option, but that doesn’t mean I won’t the day after tomorrow.”

The pope has repeatedly said there is a chance he will step down from office prematurely, like his predecessor Benedict. “It’s not a disaster. There could be a change of pope, it’s not a problem.” Benoît resigned in 2013 due to his advanced age and health reasons. The former church leader, now 95, has since held the title of pope emeritus and still lives in the Vatican.

The pope spoke to reporters on the flight back to Rome:

Francis suffered from his knee for a long time and in Canada he was in a wheelchair most of the time. The problems could be solved by surgery, but the Pope no longer wants to go under the knife. That’s because he’s still battling the side effects of anesthesia during a bowel operation a year ago.

This month there was also a trip to Africa on the program, but due to knee problems the pope had to give up. He said on the flight home from Canada that he now wants to visit these countries before making a decision on further travel. “I have good will, but we have to see what the leg says,” Francis said.

The Pope was in Canada for himself apologize for abuses in Catholic boarding schools. In these schools, indigenous children were forced into integration. They had to unlearn their own language, culture and religion.

It amounted to cultural genocide, Francis said aboard the papal plane. Following Monday’s apology, he was criticized for not using the word “genocide” as the victims had hoped. “It’s true that I didn’t use that word,” Francis said. “It didn’t cross my mind, but what I described was genocide.”

“The big picture is that the pope said a lot of good things during his trip through Canada. But there are also people who are not happy, for example because there is no it was all about the reparations promised by the Canadian Catholic bishops.

There are also those who are angry that Francis did not speak of the “doctrines of discovery”. These are decrees from 15th-century popes declaring that indigenous peoples were barbarians and savages and that colonial rulers should convert them. Some natives want the Church to take over these decrees, but Francis did not mention it. He, however, condemned colonialism and the horrific policies of the time.

It’s a traumatic subject that continues to this day and the question is whether you can ever go far enough as Pope. But the general idea is that he went very far. By acknowledging the suffering, it has also done much good for other Indigenous peoples around the world who were mistreated during colonial times.”