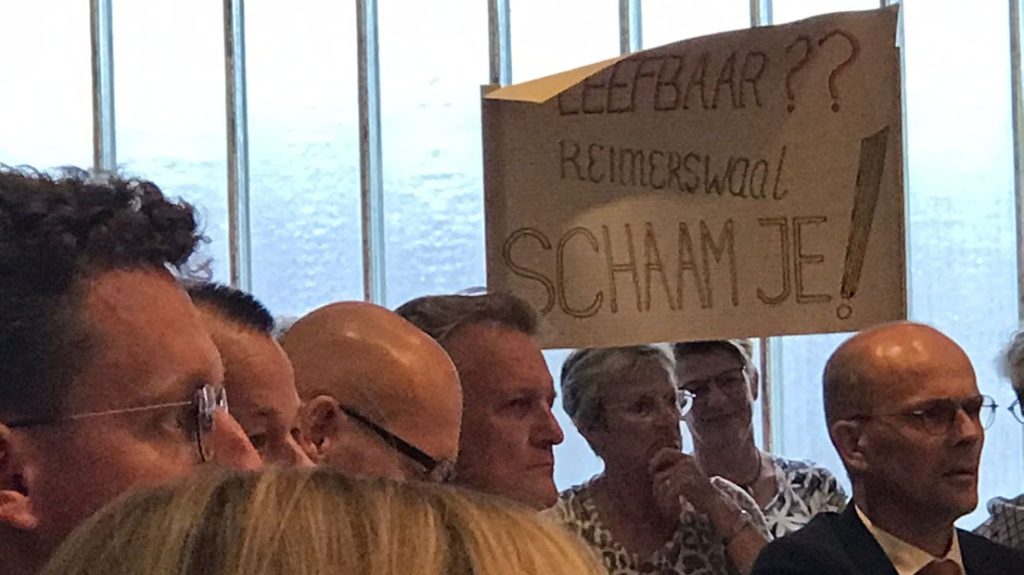 Sixty supporters of Podium Reimerswaal in the public gallery and outside the council chamber are deeply, deeply disappointed with the phasing out of subsidies to the cultural platform – around 30,000 euros a year. “With the stroke of a pen, forty years of work have been done,” the spokesperson addressed to the city councilors. “Respect for others must remain the starting point.” A theater without subsidies is not possible, she stresses. It is also at the expense of the houses in the village, where performances take place. It attracts between 5,000 and 8,000 visitors each year. A protest sign rises from the bleachers and reads: “Habitable Reimerswaal, shame on you!

Henk Schouten, spokesperson on behalf of the Zeeuws Cultural Overleg, is also unhappy with the budget cuts, for which no motivation is given. The podium would be essential, not only for Reimerswaal but for all of Zealand and beyond.

But SGP leader and coalition leader Maarten Both is unwavering. Now that the PvdA is no longer part of the coalition, the need to maintain the subsidy has also disappeared. “For us, it is a choice of principle,” he underlines. The SGP has always been clear: “We don’t want to ban the podium, but we are not in favor of subsidies.”

Marien Weststrate (Liveable Reimerswaal) also thinks it’s time for the Podium to become autonomous. The sign of protest in the stands aimed at his party makes little impression on him. “Everyone is allowed to party in Reimerswaal,” says Weststrate. “They can do it at the Podium, but we don’t want to pay for it.” And, he notes: the programming would be too one-sided and too centered on the village of Rilland.

A proposal by the opposition parties CDA, PvdA and VVD to reverse the budget cuts did not materialize. The virulent protests of CDA councilor Olaf Buteijn have no good word: “Setting aside three hundred thousand euros a year for an additional alderman and reducing this provision is a biased relationship”, notes t- he. Weststrate reacts coldly: for him, the cuts were a matter of negotiation. However, Hans van Stel (PvdA) finds it “easy to negotiate with the locals’ purses”. A proposal by CDA, VVD and PvdA for around 100 additional social rental units and housing for status holders also failed. Both approve of the need for more social housing, but according to him there are already performance agreements with the housing association.

And then: the conscious sentence. The controversial passage on gender neutrality, which PvdA leader Kees Verburg stumbled upon, remains unchanged in the Reimerswaal coalition agreement. A proposal by the CDA and the VVD to delete the text cannot ultimately count on majority support. A counter-proposal by the PvdA to retain the sentence but add clarifying text, on the advice of an external legal office, raises eyebrows for Maarten Both. “You should have found this sooner,” he said coldly. Because the suggestion that it wasn’t something to discuss with the SGP about the meaning of the genre, “he’s throwing it away from him”. Because: “The PvdA did not discuss the passage in the discussions, because there was no need for it at the time.” The PvdA votes finally divided on its own proposal: Marjolein Sinke is against, Hans van Stel for.

In the final vote, the coalition agreement was only supported by the coalition parties SGP and Leefbaar Reimerswaal: together they represent 12 of the 19 seats. None of the proposed amendments were adopted. The opposition is disappointed. “It spoils what should have been a festive evening, with the swearing in of a new college,” sighs VVD adviser Ida Sinke.