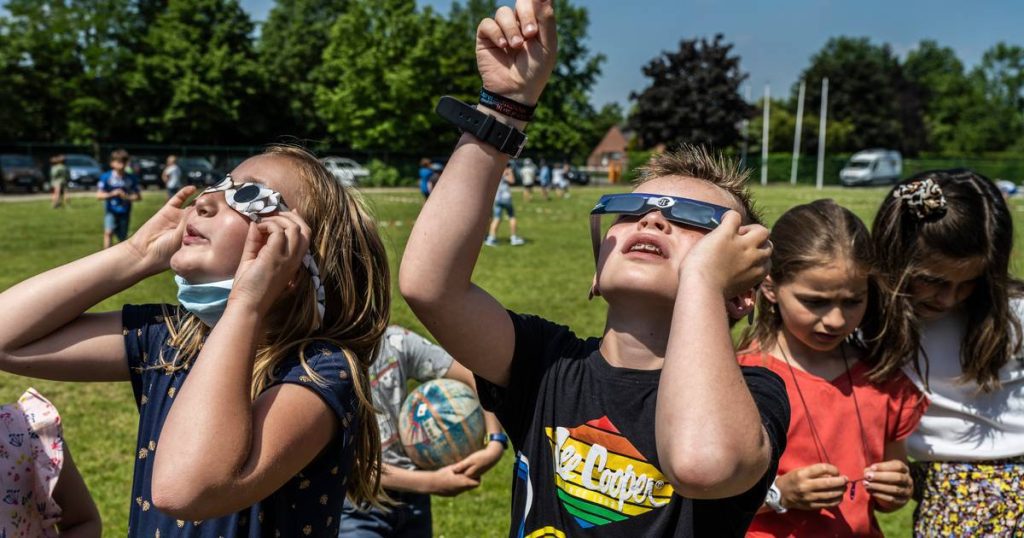 The fall month of October is shaping up to be astronomically interesting, tweets meteorologist Frank Deboosere. Mercury, Mars, Jupiter, Saturn and, icing on the cake, a partial solar eclipse on Tuesday, October 25. A word of explanation.

The astronomical highlight of this month is the partial solar eclipse on Tuesday, October 25. Around 11:09 a.m., there is already a notch on the edge of the solar disk, as the moon then begins to slowly slide past the sun. Less than an hour later, around 12:04 p.m., the partial solar eclipse can best be observed in Flanders. Then about a third of the solar diameter “disappeared”, writes Deboosere on his website. “In other words, during the peak, between 17 and 20 percent of the solar surface disappeared.”

The partial eclipse will be over around 1 p.m. Keep in mind the “approximate times”: there is a difference of a few minutes between the northwest and the southeast of the country.

The eclipse is visible across most of Europe, northeastern Africa, and western Asia, but will not be complete anywhere. This means that it will never get completely dark anywhere, like a total solar eclipse. Deboosere once again warns never to look at the sun without protection and to use eclipse glasses.

Another fact: the planet Venus is not visible this month because it is on the other side of the sun seen from Earth. Mercury, that other planet located between the earth and the sun, can be seen from our country in the first half of October in the morning and even the best of the whole year. Look east during morning twilight, low above the horizon.

In October, you can also see the orange color of Mars for much of the night in the constellation Taurus. Mars shines brighter than most stars, but the planet Jupiter does not. On the night of October 14 to 15, we can see Mars a little more easily because the planet is then close to the Moon.

On October 8, the moon will be close to the largest planet in our solar system, Jupiter, which will be visible all night this month. You can even see the four large moons orbiting Jupiter, but you’ll need binoculars.

Saturn’s rings can be seen with a telescope. The planet itself is visible in the evening to the south, then to the southwest. To reduce the risk of error, the moon will now be close to Saturn on Wednesday evening.

Until Thursday, October 6, you can clearly see the International Space Station in the evening sky. From October 21, this is also possible again, but in the morning.

Those who prefer shooting stars will have the most fun this month between October 16th and 26th. The Orionids meteor shower will peak around October 21, at a rate of 10 to 20 shooting stars per hour. Find a dark spot, look east in the early morning, and cross your fingers that the weather doesn’t turn to disappointment.

Finally, don’t forget that we are switching to winter time on the last weekend of this month: on Sunday morning, October 30, the clocks will roll back to three o’clock at two o’clock.