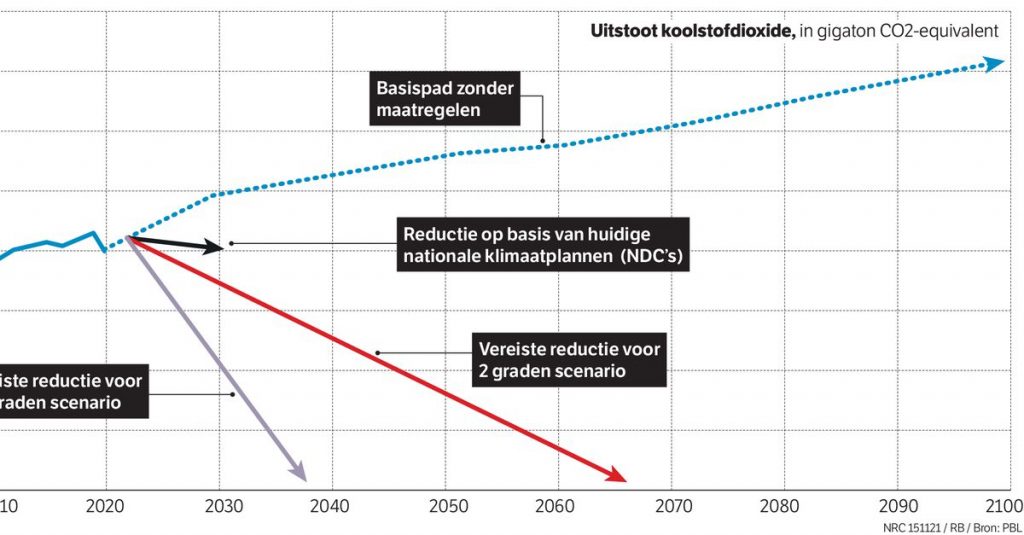 Anyone reading the agreement adopted on Saturday in Glasgow, more than 24 hours after the official end of the climate summit, could easily wonder: whether to hold late-night meetings, talk one more day and ask hundreds of diplomats to reschedule their return trip? ?

The agreement of ten A4 pages with 97 paragraphs full of exhortations, warnings, requests, reprimands and a single pat on the back can be summed up in one sentence: let’s finally do what we agreed to in Paris in 2015 and thus ensure that the average global warming remains well within 2 degrees and if it can be slightly less than 1.5 degrees.

The critics are shameful. Wageningen professor Gert-Jan Nabuurs, senior author of climate reports, calls the agreement “an extremely vague text with no concrete objective”. According to him, this shows “the failure of negotiations with two hundred countries. You will never get away with it, the interests are too different.

He is right. Climate Action Tracker scientists, who track countries’ pledges from Paris, arrived this week after a quick calculation of warming of around 2.4 degrees Celsius. Far too many, even the negotiators think. In the deal, they recognize that countries will reduce CO by 45 percent2 by 2030 (compared to 2010), but that current plans lead to 13.7% more emissions.

Still, optimists are seeing progress. Tuvalu’s climate envoy Seve Paeniu, who recalled in his closing statement that his island nation was sinking, called the deal a “strong message of hope, promise and ambition.” .

And this is also true. If more countries back their long-term goals with serious policies, the rise in temperatures could be limited to 1.8 degrees, according to Climate Action Tracker – already almost “well below 2 degrees”. In addition, the closing statement of the chapter on “science and urgency” explicitly refers to the rapid exhaustion of the carbon budget that humanity still has at its disposal this century. That’s why countries are urged in the deal to come up with new and better national climate plans by the end of next year, which should officially only be necessary in five years. Such statements are rarely so precise.

Never before has the use of fossil fuels been mentioned as a major cause of global warming in any climate deal, not even in the Paris Agreement. The Glasgow final declaration identifies coal and fossil fuel subsidies as the main culprits.

Precisely because of the call to phase out coal, the summit threatened to derail at the very end. “How can developing countries promise to phase out coal or fossil fuel subsidies when faced with their development agendas?” Indian Climate Minister Bhupender Yadav asked openly. With the support of China, he managed to get President Alok Sharma to gradually remove the mandate of many countries (phasing out) be replaced by the insignificant decrease (gradual reduction).

This is just one example of many in Glasgow showing how difficult it is to agree on an international climate policy. In Paris, the greatest conflicts have been avoided by separating the end goal from the road to it, but ultimately the great gap must be bridged between what has been collectively promised and what countries deliver individually.

The big words of the heads of government of the first week were in most cases sincere. But national, often economic, interests are so great that countries like to hand over responsibility for the solution as much as possible to others or to the future.

EU negotiator Frans Timmermans called climate change an “existential crisis, many not in the future, but today”. And if that’s really the case, he said, then we can’t just say that, we’ll have to act on it.

The spokesperson for Maldives, an island state like Tuvalu, also thought so. “For two weeks, I sat at negotiating tables here in Glasgow, listening to discussions about words, commas and periods.” It is time, she said, to see climate change as the emergency it is.

A version of this article also appeared in NRC on the morning of November 15, 2021