The Oisterwijk image bank shows you films from yesterday and today. Each week, the Image Bank volunteers show you a film, which you can find in the Image Bank.

Perdido Street Blues by Our Pleasure 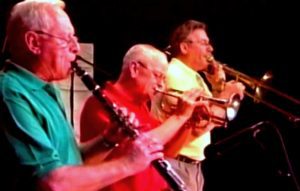 Our pleasure is playing Perdido Street Blues (Fragment from the LOVO film).

LOVO has repeatedly invited the Oisterwijkse Oude Stijl Jazz Genootschap Ons Geluken to their studio for a beautiful recording of their musical abilities. Here is a recording from 1999 where the Perdido company plays Street Blues. The company was founded in 1977 by a group of music-loving friends. They gave their last concert in 2012. During their 36 years of existence, they formed a close group with names such as Thom van Rooij, Frans de Bruijn, Gijs Touw, Raymond van Dun, Ton Willekes, Wim van by Wegen, Ad Habraken, Toon Hoes and Jan van Rijthoven. They played various albums filled with their music and they even traveled to the United States where they had successful performances in the jazz spot of New Orleans. Restaurant De Gulle Ark on the Oisterwijkse Gemullehoekenweg can be called their home base.