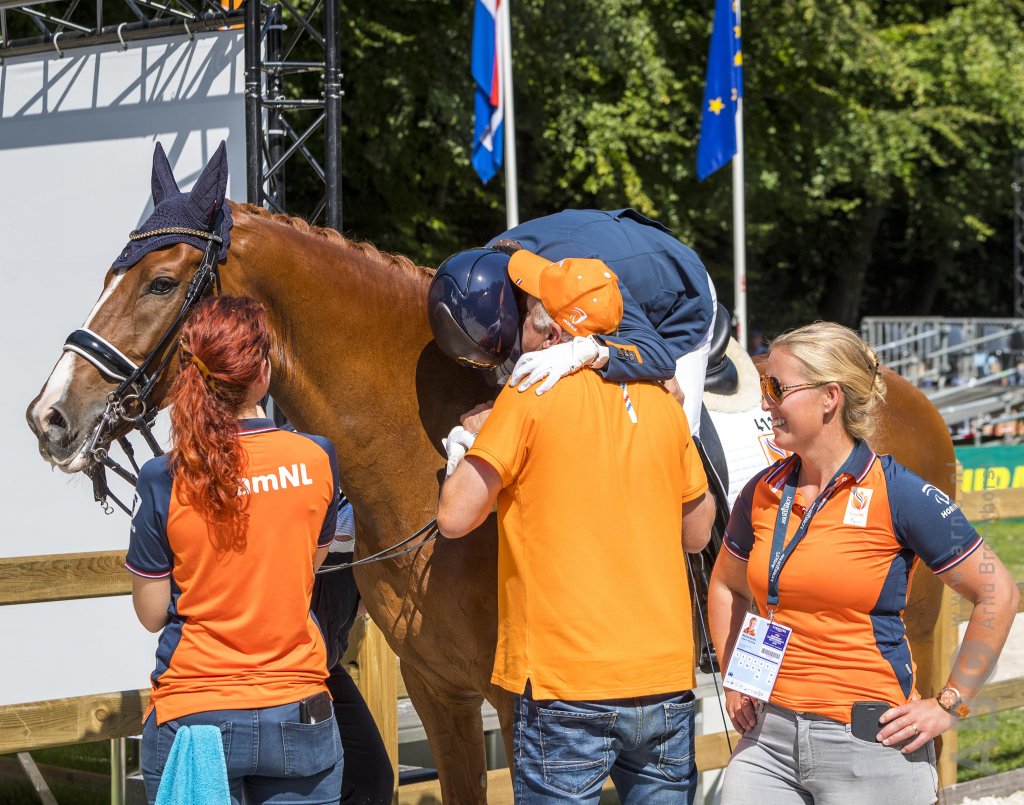 Cheers ring out, as Frank Hosmar has just won tag team gold for the orange quartet Paradressuur! The NLO-WVM-TeamNL Paradressage team knocks Denmark, who have a very good home game here, from their throne. Sanne Voets: “We got the gold!”

Lotte Krijnsen and Rosenstolz (s.Rotspon, owner of the Krijnsen family) climb to fifth in Grade III today (71.412%) and Lotte smartly secures a starting spot in Freestyle on Sunday. Denmark’s biggest contender, however, had an impressive points tally after that rating and redemption had to come from Frank Hosmar. The mission was clear: anything above 75.3% would provide gold to NLO-WVM-TeamNL. With a lot of pressure on his shoulders, Frank Hosmar starts his test with Alphaville NOP (by Sandreo, owned by F. Hosmar and A. Hosmar-Keekstra) with a big smile. A good start, but the score drops slightly in the middle of the event. How exciting! Frank squeezes the last of his test and then we have to wait for the final official result. The commentator starts, but the orange team has already seen it on the scoreboard and starts cheering: 75.786% for Frank and gold for the Netherlands!

Tears in the eyes
The national coach finds it hard to believe: “I have tears in my eyes! Denmark, the country of origin, made this championship exciting without precedent. In Grade 3, two Danes rode really hard and we had done all sorts of calculations beforehand about how high the Danes could score so we still had a chance and what Frank needed to accomplish next. Then in Grade V, Denmark’s lowest result went up and Frank had to go a little higher, so the tension really increased. He drove so well and focused and then waited for the scores. It was as exciting as I was in Tokyo and then we failed to win. Then behind Great Britain and now we have beaten the Danes. It was really not easy before. I have of course kept an eye on the competition this season, who scores what. Home advantage can also work wonders, we took advantage of that ourselves in Rotterdam. Besides, we have two rookies with us and they also have to keep a cool head, but our team did a fantastic job. A dream scenario and this gold medal gives wings for the future.

Medals thanks to the owners
One of those debutants is Demi Haerkens, and the result has been impressive so far: individual silver and team gold, with the Freestyle to be contested on Sunday. The rider here gives full credit to the owners of her EHL Daula: “Rianne and Paul Swinkels of EHL Horses said, ‘Go find a horse for sport.’ Eventually we found Daula, which they bought and made available to me. Rianne and Paul are there for every game and support me every time, I owe them a lot. It’s great to have people like that behind you.”

Plow for Paris
A ranking in the top 6 would suffice for direct qualification for the Paralympic Games in Paris. “Well, we made it,” smiles team leader Joyce van Rooijen-Heuitink. “This quartet could go in full, but of course we know who will be the fittest by then. Hopefully others back home will be inspired to be part of this club and train very hard so they can go to Paris as well. Of course, we still have some good reserves like Maud de Reu and Britney de Jong who are also very strong. I was also confident of a good result, if someone gave up with those reservations.

Denmark silver, USA bronze
The Netherlands wins the national battle with a total of 230.225 and is thus slightly ahead of the Danish team (229.751%). Bronze ultimately goes to Team USA with 225.335%. Tomorrow the top 8 combinations per grade will start in the Freestyle to Music, for TeamNL all riders have qualified for this individual final battle.

The medal ceremony is tonight, photos will follow later.