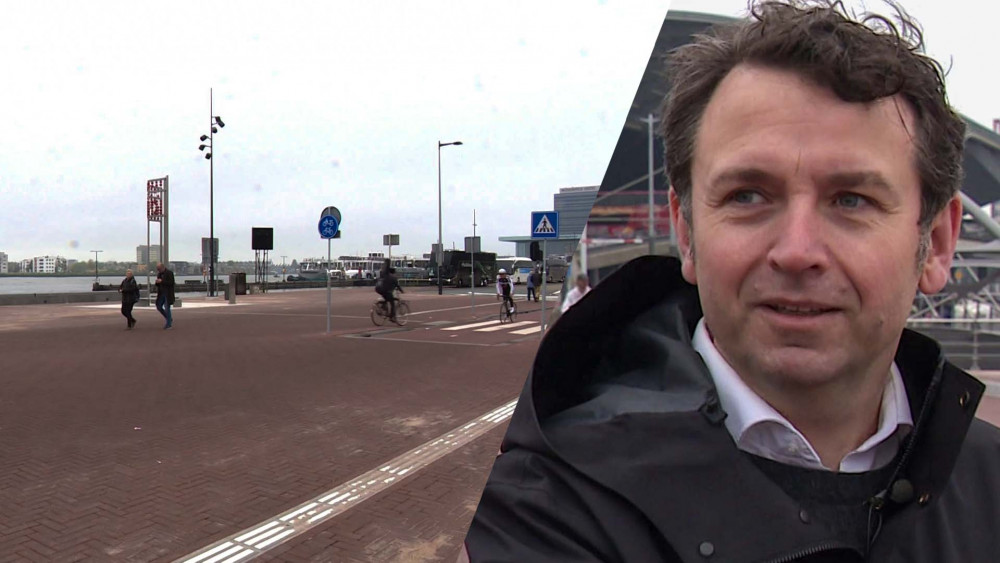 A new “shared space” has recently been added to the east side of Central Station. It’s a kind of roundabout without clear rules. In this case, cyclists, scooters and pedestrians circulate simultaneously on the square. In 2015 there had already been a discussion when the first shared space behind the station was put into operation, but now a second has been added.

“So you can see it’s a big, flat, free space,” says traffic expert Jacob de Vries. “There are streams of pedestrians, cyclists and mopeds all passing each other. And that should create some pleasant chaos.”

“Streams of road users intersect and this should lead to pleasant chaos.”

The idea behind a shared space, says De Vries, is to create uncertainty. “People then pay more attention, because they don’t know how it works. That’s precisely why security increases.”

With the second shared space at CS, the same discussion resumes as seven years ago. Reinder Rustema had already launched a petition at the time. “Yeah, and now it still doesn’t look like I imagined,” he laughs. “H is an easy solution from the municipality. A shared space is in fact: do it yourself.”

Rustema explains that the concept comes from a village in Friesland. “It worked there, because every now and then a car drove by. In a busy city like Amsterdam, a different plan has to be made.” He himself offers to work with a “green wave” for cyclists, so that they can continue cycling in one go. “So pedestrians and cyclists know where they are.”

“Now pedestrians are on the safe side because cyclists are going through everything.”

De Vries agrees with Rustema that shared space is not the ideal traffic situation. “Now pedestrians are on the safe side because cyclists are going through everything.” Pedestrians are the “weaker” party in this case and should therefore be especially careful. “There are already many places in Amsterdam where walkers and cyclists mix, such as the Vondelpark or along the canals. Cyclists have become desensitized to shared spaces because they are already used to them.” According to De Vries, this is not what you want in a shared space, because then the feeling of ambiguity disappears.

The municipality says the area was created to give more space for cyclists and pedestrians. In addition, they have the shared spaces monitored, so it will soon be known how many accidents occur on the roundabouts.

💬 Don’t want to miss anything in Amsterdam?