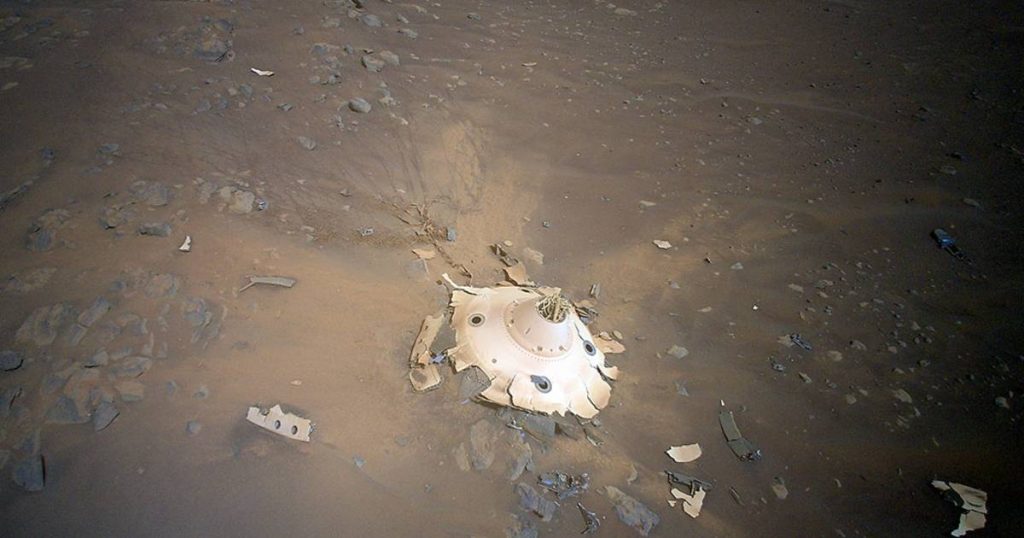 The American space agency (NASA) has released new photos of the planet Mars. The images show the parachute and the protective shell with which the walking robot Perseverance landed.

The ten aerial photos were taken during the 26th flight of the Mars helicopter Ingenuity on April 19. “Each time we fly, the Ingenuity flies over new territory and we gain a perspective that no previous planetary mission could have achieved,” said Teddy Tzanetos, who leads the Ingenuity research team. The images show debris from the parachute that helped the Mars robot land and the cone-shaped protective shell of the Perseverance. Previously, this debris had only been imaged remotely by the Mars rover itself.

In the aerial photos taken by the Mars helicopter, scientists can distinguish much more detail. In this way, the images can help land future spacecraft more safely. This knowledge can be applied, for example, in the “Mars Sample Return Lander”, which will return the Martian rock and sediment samples collected by Perseverance to Earth for detailed analysis. Approaching, descending and landing on Mars is fast and stressful, not only for engineers on Earth, but also for the spacecraft that must endure gravity, high temperatures and other extremes.

“The best-documented Mars landing of all time”

“Perseverance had the best-documented Mars landing in history, with cameras showing everything from parachute inflation to landing,” said Ian Clark, Perseverance’s former systems engineer and now team leader. Takeoff Mars Sample Return. Still, the images of the Ingenuity offer an additional perspective, it sounds. “Either they will confirm that our systems worked as we believe, or they could provide technical information that we can use to plan the return of samples to Mars.”