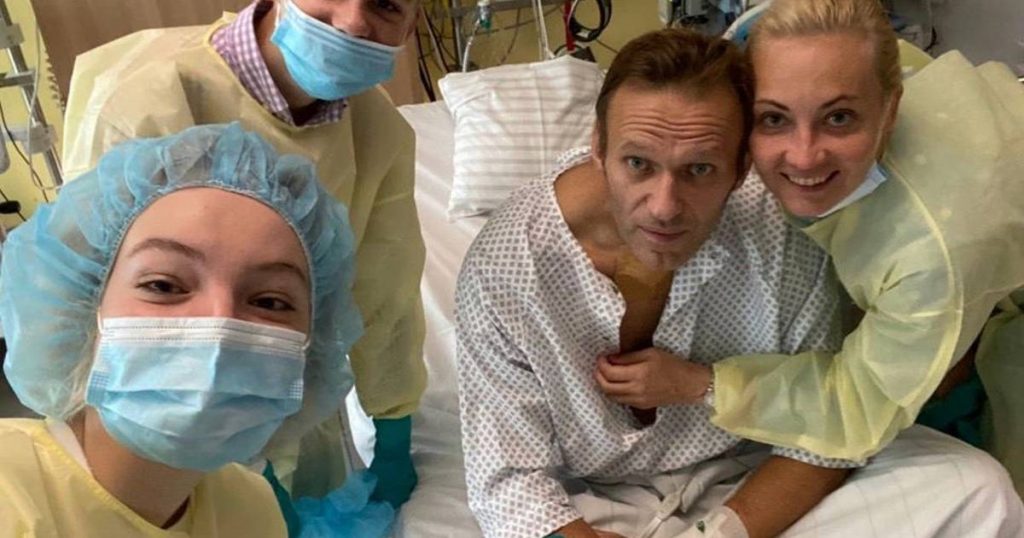 Russian opposition leader Alexei Navalny (45) thanks on Instagram everyone who helped save his life, exactly one year ago today. He then fell ill on a domestic flight from Siberia to Moscow, passed out in a hospital in Omsk and was transported from there to Germany, where doctors determined he had been poisoned. “I just don’t know when to celebrate the start of my second life,” the 40-year-old wrote with humor.

He wonders when his second life began. ‘When I on August 20, 2020 on the plane from Tomsk to Moscow thought i was dying? Or seventeen days later, when I woke up from my induced coma in hospital in Berlin? Or the day I regained consciousness of myself and realized where I was and why (I even find it hard to name this day, by the way)? “

This is followed by thanks to a number of people. “The pilots who made an emergency landing and gave me the chance to survive, the paramedics who gave me the right injections who took me alive to the hospital and all those who reacted with outrage because that you kept me from quietly suffocating with a pillow in the hospital in Omsk or would just be disconnected from the ventilator. Thanks again everyone! Thanks to you everything went well. I survived and finished in prison (hahaha sorry, I could not resist “, writes Navalny with a lot of humor.” I am going to drink tea to all of you today and also coffee from elsewhere and even cocoa which remains of the package which was sent to me, packed in a special box labeled ‘food’ 😉. ‘

Then the Kremlin critic notices that he wants to hand over another thank you note. “I forgot to thank the corruption. It also played a role in my rescue. After disintegrating the entire state apparatus of Russia, they had no other choice but to disrupt the special services (Secret Service, ed.). The level of covert operations that we have is about the same as that of health care, education, housing and municipal services.

Navalny then refers to an article by his hand that appeared today in the Frankfurter Allgemeine Zeitung, The Guardian in The world. He wrote: “Just a year ago, I did not die of chemical poisoning. And he specifies that “the quality of the operations of the Russian secret services suffers from a leadership which rejects the money of the protection of the economy”.

The Russian opposition leader talks about the unprofessional way he was poisoned. “FSB (Secret Service, editor’s note) employees applied the nerve agent to my underwear contrary to all instructions. It was as inappropriate as the way they followed me too blatantly. This allowed activists and researchers to fully expose this. Corruption stands in the way of solving the most pressing political problems, he says. “It is high time to make the fight against corruption a top priority,” writes Navalny. He managed to get the text out of the penal camp through his lawyers, where he is serving a 2.5-year prison sentence for breaching the terms of a previous conviction for fraud.

The poisoning of Navalny and his incarceration in the IK-2 penal camp were also raised on Friday afternoon during the meeting of German Chancellor Angela Merkel with Russian President Putin in Moscow. Merkel again demanded the release of the Kremlin critic. “The sentence to remain in a penal colony on the basis of an earlier verdict, which the European Court of Human Rights has described as clearly disproportionate, is not acceptable,” Merkel said at a conference of press after the meeting. “We will continue to keep our finger on the pulse. ”

Putin noted that his main opponent is not being held “for his political activities”, but “for a criminal offense against foreign partners”. He also said that “the fight against corruption should not be used for political ends” and that “the fight against corruption is very important” and that Russia will do “everything” to eradicate it. Anti-corruption activist Navalny is best known for his investigations into the lifestyles and bad practices of Russian elites, including Putin and his entourage.

Putin denies that the FSB poisoned the opposition leader. The Bellingcat research collective concluded that at the end of last year after reviewing phone data and trip details Russian secret service. Germany had previously said it had “unequivocal evidence” that Navalny was poisoned with a nerve agent of the novichok group. Independent research by France and Sweden, among others, has confirmed this. “Navalny is not important enough to be a target,” Putin said. “But if anyone wanted to poison him, he would have finished the job.”

Merkel also discussed the conflict in Ukraine, the Nordstream 2 Baltic Sea gas pipeline and the situation in Belarus and Afghanistan with Putin. The Russian president has said he hopes for “constructive and productive talks”, although it is likely that Merkel will visit him as head of government for the last time. She will no longer run in the September elections. “Despite the differences of opinion on some topics, I am happy that our contact has never been lost,” the Chancellor said ahead of the meeting.

Earlier today, Merkel laid a wreath at the Tomb of the Unknown Soldier in Moscow, in remembrance of Nazi Germany’s attack on Russia 80 years ago.