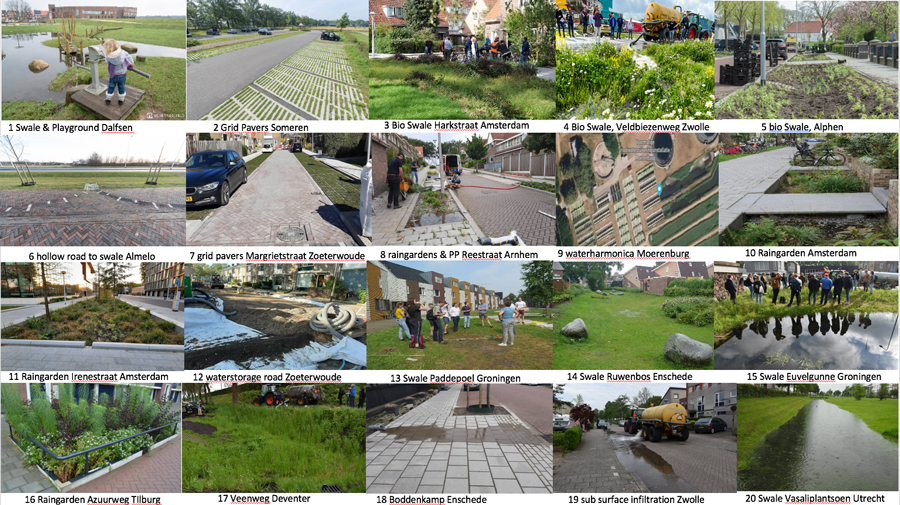 Nature-friendly wadis, rainwater gardens and infiltrating sidewalks are popular with municipalities and water offices which participate in the climate protection of cities, districts and villages. This emerges from the Top 21, which was compiled on the basis of clicks from visitors to the Climatescan.nl site. Past top 10: water places and concave roundabouts.

Floris BoogaardThe Top 21 shows the most viewed climate adaptation projects on climatescan and gives an impression of attention grabbing apps, says coordinator Floris Boogaard. “This is not a representative sample. They are not the best projects either. You feel like people are busy. And it’s different every year.

Climate scan is a citizen science project that aims to share knowledge on climate adaptation. The website is based on an interactive mapping application which aims to exchange international knowledge on “blue-green” projects around the world. Hanze University of Applied Sciences, with which Boogaard is affiliated as a lecturer in Spatial Transformations, is coordinating the project which began in 2013.

It is now the largest green-blue database in the world, according to Boogaard. “That’s why he’s unique. But we want to increase it, absolutely. We are currently building a website in Indonesia, Climatescan.id. It will be very interesting.

Do well
What sets Climatescan apart from other adaptation websites is that users can put projects on the map themselves. There are now over 1000 active participants all over the world who publish projects. There are already more than 8,000, with the emphasis on projects in the Netherlands. This focus is mainly due to the Dutch origin of the initiative, explains Boogaard. “The Netherlands is doing well, you know. But there are cities abroad that we can learn a lot from.

It happens, by the way. This is evident from the growing interest in so-called rain gardens, rainwater gardens, which are increasingly popular based on the Top 21 in the Netherlands. Boogaard: “Australia is full of them. New Zealand too, Portland… so we’re going to learn some lessons. But we still do it far too little. There is a lot going on abroad. I often go to Copenhagen, where in 2011 there was a major flood after 150 millimeters rain in 2 hours, a downpour that we have not yet had here in the Netherlands. There was a lot of damage. They said there: we’re going to put the same amount of damage into adapting to the green-blue climate. The city is completely built. And there’s a lot of creativity in there, which I look at a lot. “

The Top 21 also aims to put climate adaptation on the map and boost it, Boogaard says. Click behavior also enables analyzes such as: “Multifunctional use of space is a challenge in busy urban areas, most of the Top 21 projects provide a response not only to flooding but also to drought and heat as well as biodiversity. , water and air quality. . “

A rainwater garden in the Irenestraat in Amsterdam

Rain gardens
Every year has its momentum, says Boogaard. “A few years ago, water squares were very high on the list. Now it’s less. Rain gardens really come to the fore. What you are also seeing now is that the water storage roads are getting more attention. There is one in Zwolle, in Zoeterwoude.

Nature-friendly wadi
In Amsterdam, one was placed in the Harkstraat. Torben Tijms of Waternet said about this in a quotation recorded by Boogaard: “The success factor of this wadi is the collaboration between designer, planner, green consultant and hydrologist. Together, they specifically researched this location for the correct structure of the wadi. The results are impressive. A design resistant to rain because the streets of the district without gullies flow towards the wadi respectful of nature. When all the other greenery in the region succumbed to the prolonged drought, it is Wadi Harkstraat that is still in full bloom.

In Groningen they also have good experiences with the naturally friendly wadi. Klaas Homans from the Municipality of Groningen: “By treating the rainwater in a smarter way, we are not only relieving the entire system in the city of Groningen. We also immediately make a profit in the field of greenery and ecology. We also realize that rainwater is used in business processes.

In Tilburg, they started the construction of “rain gardens” or rain gardens intended to temporarily collect runoff water. “The ‘raingarden’, a small gesture, but a relatively large impact on the infiltration of annual runoff precipitation. And contributes to a (local) lowering of the temperature. The ideal solution for places where space for greenery and water is limited ”, explains Sander Kossen from the Municipality of Tilburg.

H2O toured the city of Groningen with Floris Boogaard and listened to his explanations on adaptation measures in the city. The report is available in the first print edition of 2022.