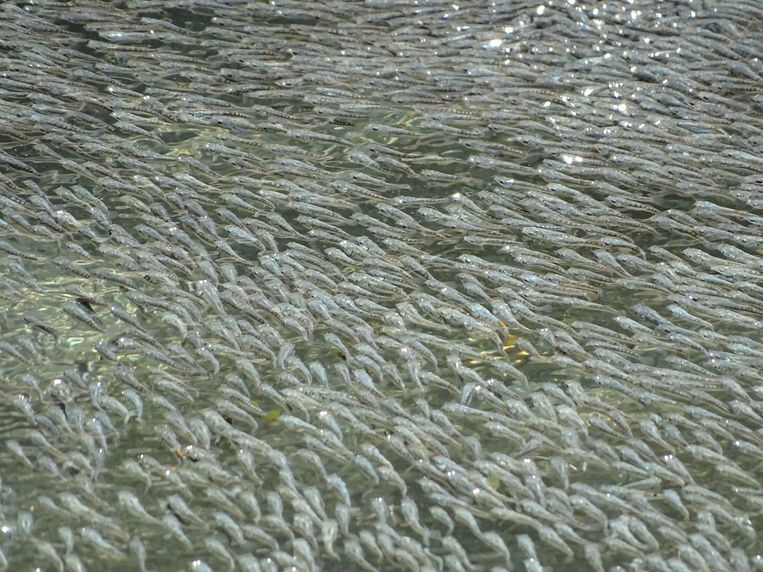 In order to survive in the sulfur-rich waters around Teapa, the poecilia sulphuraria especially in the upper oxygen-rich layer. This makes small fish, closely related to guppies commonly found in aquariums, easy prey for hunters like the kingfisher. But fish don’t give up easily, new research shows in scientific journal Current biology. They frighten the birds with collective wave movements. The researchers discovered this behavior because the fish were making waves as they passed them – apparently the fish sounded the same alarm as the presence of hungry kingfishers.

This wave movement resembles wave in football stadiums and concert halls. The same goes for Mexican sulfur pools, the researchers write. When a kingfisher dives into the water to catch a fish, the fish in the immediate vicinity respond with a short dive. Their neighbors do the same, as do the neighbors of the neighbors until the whole school of hundreds of thousands of fish joins them. Up to two minutes.

It works, the researchers write. Birds that attack against their better judgment during such a wave are less likely to end up with a fish. It seems they learn to wait for the wave to pass, so they attack less often. Biologists attribute this to the puzzling effect: the bird has trouble orienting itself when the water moves.

The fish are probably diving because they are surprised, explains behavioral biologist Charlotte Hemelrijk of the University of Groningen, who did not participate in the research herself. “If such a kingfisher attacks in the middle of a school, the fish swimming nearby are surprised. They dive in response. That all the other fish then do the same is also a surprising reaction, she says. “They get nervous about the neighbors pulling and doing the same. It has evolved into this collective wave with which they are now defending themselves against bird hunting.

The phenomenon is more frequent in the animal kingdom. Bees also wave together when threatened. Hemelrijk also sees parallels with his own research on starlings. “When a flock of starlings is attacked by a bird of prey, they individually move away from the attacker in a zigzag motion. When they do all that, from the ground it looks like a black belt moving through the swarm. How long this continues depends on how much the birds are surprised by the bird of prey. “The same goes for fish,” she suspects, “the more the fish are surprised by the attacker, the longer the wave action lasts. ”