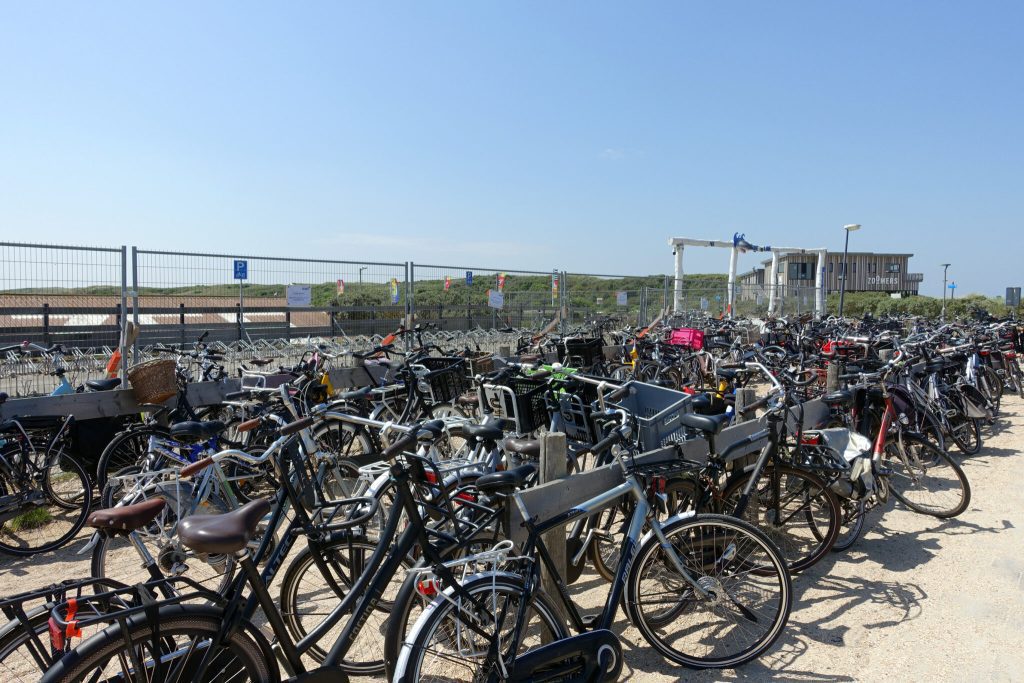 Photo above:
Up to and including last week the bike shed was very busy. (Photo: Hans Boot)

Castricum – For weeks it was difficult to find space in the beach bike shed as much of it was closed due to the danger of the shed below collapsing. This has now been restored, but plans for expansion are still awaiting completion.

In autumn 2021, the operator PaanZEE (part of the Biesterbos group) was forced to close part of the bicycle storage on the beach plateau. These were pitches on a concrete slab which serves as the roof of an old shed. Because the risk of this foundation collapsing from rotting concrete was increasing, fences were erected around the slab with signs with the text ‘Temporarily closed. (Coming)’.

Especially during the weekends, the shortage of places led to chaotic scenes, so the situation did not bode well in view of the summer season. A conversation with Marcel Tervoort, responsible for all PaanZEE car parks, however, brought some light into the darkness. He said: ,,This week, 175 stamps were placed under the concrete slab, so that part was added to the parking lot again. This saves about 400 places.

The precarious situation around the bike storage on the beach prompted De VrijeLijst to submit written questions about it to the Executive Committee on 27 May. They then received a response by letter dated 20 June. This confirms that the municipality had the bicycle parking space on the shed roof decommissioned in September 2021 after it was found to be unsafe without support. However, the Commission does not comment on the stamps which, according to De VrijeLijst, have been deleted, but specifies that this file has been dormant for a long time. The new council recognizes the urgency and immediately began discussions with the car park operator to find a solution.

Asked by the political party to know if the municipal executive will take action if the operator does not accept the installation of the stamps, the answer is that three alternative locations have been identified for the construction of a temporary bicycle parking lot on and near the beach plateau. . However, this question has been rendered obsolete by the recent application of stamps. The town hall has announced that it will contribute €5,000 to the reinforcement of the hangar.

On behalf of the operator, Marcel Tervoort answered De VrijeLijst’s questions as follows: ,,The alderman until May this year was a member of De VrijeLijst and therefore knows exactly how things work. It is suggested that the tray became unsafe due to the removal of the bracket, but it was never there. The situation has deteriorated over time and at some point assessed by our structural engineer, who checks the building at our request and initiative. For years we have been working on the realization, among other things, of a new, enlarged bicycle garage with more facilities to meet current needs. To date, we have not received a permit for this. The last amended request is from December 2021, as the previous request did not. The operator himself reported to the municipality last year that the procedures were taking too long and that the structural condition of the car park was unsafe. It was then decided in consultation to close this part of the car park until the environmental permit was obtained. We are still waiting for that. A recent constructive discussion with Alderman Beems led to a quick interim solution, in which the original capacity is temporarily reduced by applying stabilizers. We hope to receive the required permit soon, so that this problem can be solved in an integrated and better way, and facilities such as short-term parking and adaptation of the parking infrastructure can also be implemented. We now have full confidence in that. »

New beach alderman Roel Beems also wanted to answer this tricky question and said: ,,The policy of the new council places a lot of emphasis on cycling. You will find it in our policy objectives in the areas of mobility, health, tourism and in a number of portfolios. Of course, we can’t encourage everyone to ride a bike and there won’t be room for that bike at the beach. A good infrastructure for the long term is being worked on, but a solution had to be found for the upcoming high season. Different options have been identified for this and a constructive consultation with the operator resulted in this pragmatic option, the most advantageous for the municipality. The college is happy that this was achieved quickly and that beach visitors are simply welcome with their bikes.”