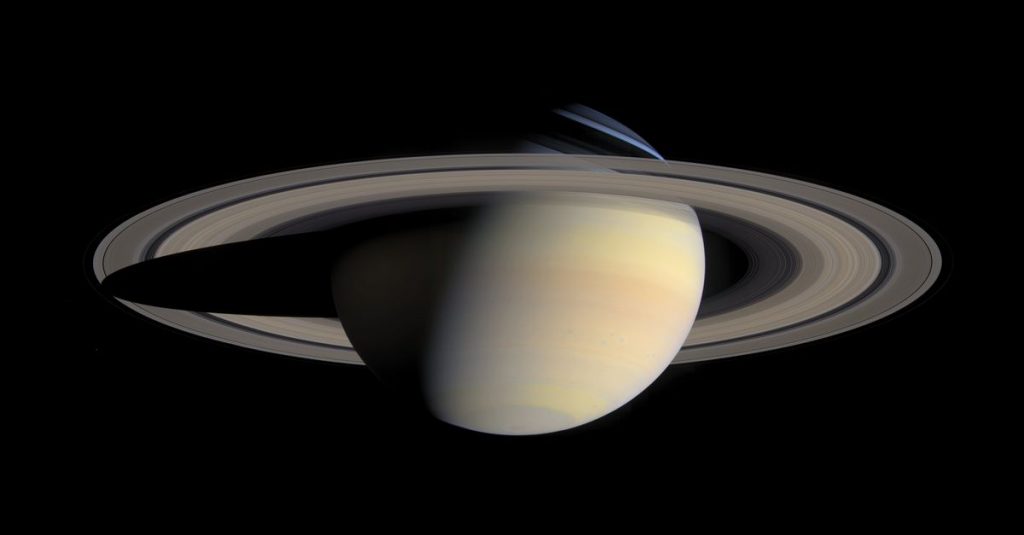 The nucleus of Saturn is blurry. There is no hard line between a solid core and the rest of the planet. And this core is also much bigger than previous estimates. To reach these conclusions, astronomer Christopher Mankovich and physicist Jim Fuller, both from Caltech University, studied a wave in one of Saturn’s rings using NASA’s Cassini spacecraft. They published Monday the results in the magazine Nature astronomy.

Saturn is the second largest planet in the solar system; its diameter is about nine times that of the Earth. The planet is distinguished by spectacular rings of ice and stone. Saturn, like Jupiter, is a gas giant; a gigantic planet without a hard surface. According to ancient ideas, the hard core of a gas giant is surrounded by a separate layer of helium and hydrogen.

But new measurements show that the heavy ice and rock in the core mix with helium and hydrogen. This mixture extends to about sixty percent of the entire planet. The heavy rock fraction decreases towards the outside. So there is no hard limit.

Astronomers have already estimated – using space probes – what the interiors of gas giants Jupiter and Saturn should look like. The way a planet’s gravity shoots a space probe reveals something about the distribution of the different layers of the planet. For example, if all the mass is evenly distributed, the spacecraft performs a clean, elliptical orbit. If the mass is unevenly distributed, the planet pulls the spacecraft slightly differently in different places. NASA’s Juno spacecraft orbiting Jupiter and Cassini orbiting Saturn from 1997 to 2017.

Based on Juno’s data, astronomers suspected that in Jupiter the line between the core and lighter materials was blurred. This was unknown to Saturn. Cassini did not fly near Saturn long enough to study the nucleus as well; the question remained open what exactly the interior of Saturn looks like.

A wave in the ring

To answer this question, American researchers studied a wave in one of Saturn’s inner rings. This wave travels through the ring like a sound wave. At one point in the ring, the particles first approach each other, causing them to rise, after which they move away from each other again. The movement of this wave, like the orbit of space probes, is influenced by the accumulation of the interior of Saturn. The researchers studied these waves using Cassini’s observations. They then looked at which model of Saturn’s interior could best explain the observed wave. A hazy core, without a sharp transition to light substances, is best suited for observations.

“Nice work,” says Daphne Stam. She is a planetary researcher at the Delft University of Technology. “It is impressive that the researchers managed to penetrate one of the rings inside the giant planet on the basis of a single wave.”

It’s important that the new knowledge tells us something about how fast Saturn is forming, Stam believes. “The speed at which the nucleus of a young planet is pulling gas towards it can be read from inside. The faster the planet does this, the more blurred the boundaries between the different layers. “

A version of this article also appeared in NRC on the morning of August 17, 2021