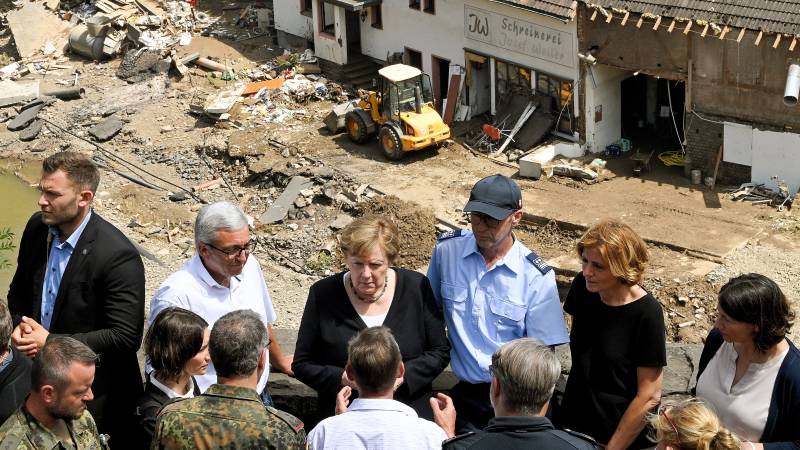 Merkel said the recovery is a long-term endeavor and that a support plan will be adopted on Wednesday. “Fortunately, Germany is a country that can support this financially.”

At the end of August, she wants to return to Schuld, because “not everything will be rebuilt here in the short term”.

Floods in Germany have so far killed 157 people.

Merkel also stresses the need for better climate policy. “We can see here how great natural disasters can be. We will oppose them, in the short term, but also in the medium and long term.” According to her, nature and climate should be taken into account more in policies than has been the case in recent years. “We have to hurry. We have to be faster in the fight against climate change.”

“A national effort is needed to cope with the consequences of the disaster,” regional Prime Minister Malu Dreyer, who accompanied Merkel, later said. “The search for survivors is still ongoing, we will not rest until we find all of the missing.”

Mayor Herbert Lussi van Schuld said with his throat tied that all buildings in his municipality are damaged and it will take years to restore everything. “This disaster will leave scars on everyone in debt.” He feels stretched by the aid promised by Merkel.

When asked by a journalist about the lach-incident Armin Laschet, her party’s presidential candidate who traveled to the disaster area with President Frank-Walter Steinmeier, Merkel didn’t really get in. “I think the concern in North Rhine-Westphalia is as great as in Rhineland-Palatinate and the state has already released money.” Laschet is prime minister there.

When Steinmeier spoke about the situation in the hard-hit Erftstadt neighborhood, Laschet stood in the background, laughing and chatting with the people around him.

In the largest city in the disaster area, NOS reporter Henrik-Willem Hofs shows what it looks like: