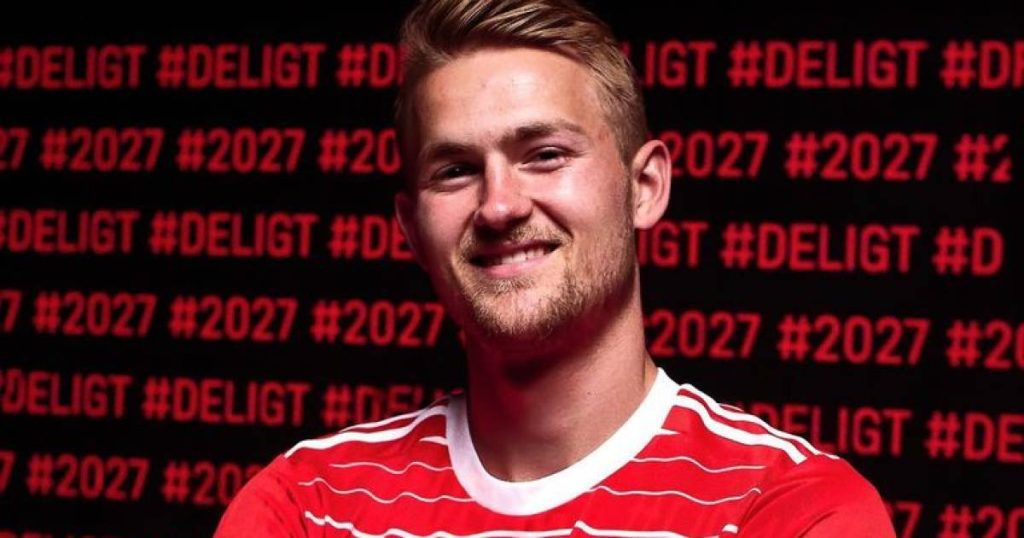 “I am very happy to become a player at this great club,” De Ligt told the website of Bayern Munich, who have already won the Bundesliga title ten times in a row. “FC Bayern is the most successful club in Germany, one of the most successful in Europe and also in the world. From the start, I felt a real appreciation. That convinced me. In addition, the Bayern are a very well run club with big goals.

Bayern already wanted to bring De Ligt to Germany in 2019, says technical director Hasan Salihamidzic. ,,We were already convinced of his qualities as a defender and we are even more so now. With his professionalism, winning mentality and great character, Matthijs is a perfect fit for us. As a young player he was already a leader at Ajax and at 22 he can still develop further.

De Ligt had previously indicated that he would prefer not to leave Juventus, but his club were open to a transfer due to the precarious financial situation. Bayern then proved to be more decisive than Chelsea, who the born Leiderdorper would have liked to add to the selection.

The German national champion would have paid at least 70 million euros for the defender of Orange. This amount can rise to 80 million euros thanks to bonuses. The 22-year-old former Ajax player has signed a contract at Munich until the summer of 2027. It is not yet known which shirt number De Ligt will receive, but numbers 3 and 4 are currently still available on The Rekordmeister.

De Ligt has been playing for Juventus since 2019, who snapped him up for €75m after a successful year with Ajax in the Champions League. The centre-back has made 117 appearances for Italy and started most of the time. He scored eight goals for Juventus and won the Serie A, Coppa Italia and Supercoppa Italiana.

At Bayern, De Ligt will meet former teammates Ryan Gravenberch and Noussair Mazraoui from his time at Ajax. The midfielder and defender came from the Amsterdam club at the start of this transfer window.

Bayern left for Washington yesterday for a training camp. Tomorrow, a practice match against DC United, coach Wayne Rooney’s team, is scheduled. A meeting with Manchester City will follow at the weekend.

Bayern Munich became Bundesliga champions for the tenth consecutive time last season, but will have to do next season for the first time since 2014 without top striker Robert Lewandowski who left for FC Barcelona. Bayern open the new Bundesliga season on Friday August 5 with the away game at Eintracht Frankfurt.

react can be found at the bottom of this article. Only comments with a full name will be posted. We do it because we want a debate with people who stand up for what they say and put their name to it. If you still need to enter your name, you can do so by clicking “Login” at the top right of our site.