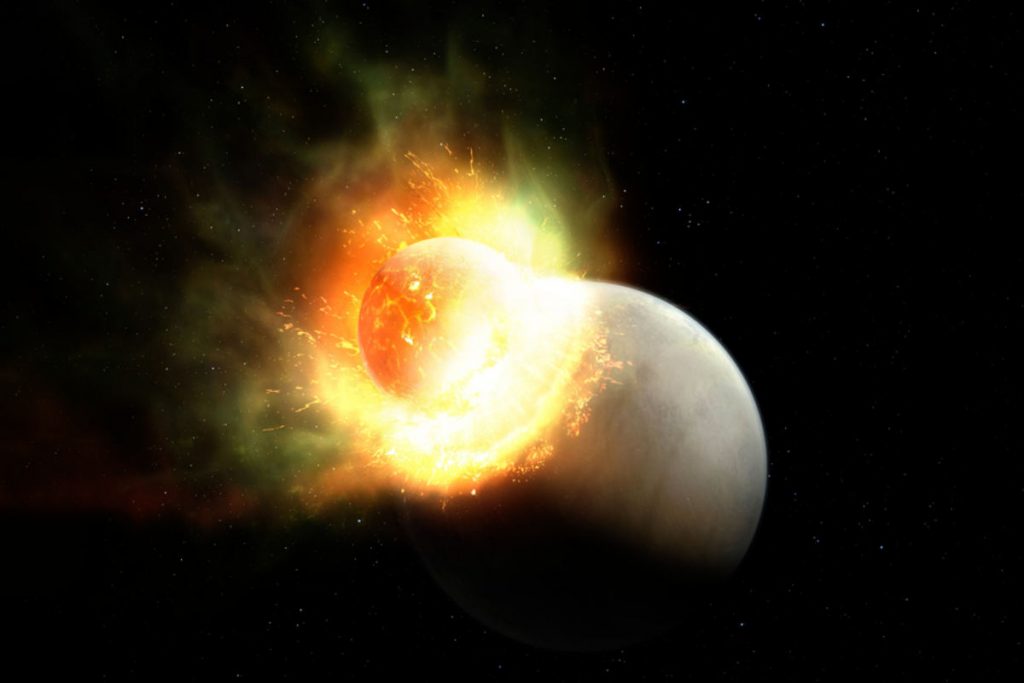 Such violent confrontations are likely to be common in young solar systems, including our own. But this is the first time that researchers have found evidence of this.

The formation of a planetary system is often a somewhat messy affair. For example, it is not uncommon for objects to collide. When this happens, the celestial bodies can merge together, creating even larger planets. It is also believed that the Earth and the Moon in our own solar system are the product of these gigantic collisions. Astronomers therefore suspect that these violent clashes are common in young solar systems. But really prove it? This is an other story.

HD 172555
Yet surprisingly, researchers have now succeeded in doing so. In a new study they looked at the white-hot star HD 172555; a young star about 23 million years old and about 95 light years from Earth. This star has long attracted the attention of scientists. This is because the makeup of the dust swirling around it is somewhat unusual. For example, dust contains large amounts of unusual minerals, trapped in much finer grains than astronomers might expect. “Because of these two factors, the HD 172555 is considered a special system,” said Tajana Schneiderman, study leader.

Story
The researchers wondered what this dust could reveal about the history of the system. Using the Chilean Atacama Large Millimeter Array (ALMA) network, the team looked for signs of carbon monoxide. “When studying the gas in debris disks, carbon monoxide is usually the brightest and therefore the easiest to find,” explains Schneidermann. The researchers therefore set out to find it.

Carbon monoxide
And with success. Because after a careful analysis, the researchers managed to detect carbon monoxide around the star. They found that there was quite a bit of carbon monoxide orbiting the star, at an unusually close distance of only 10 AU (astronomical units; 1 AU is the distance from Earth to the sun). The researchers considered several scenarios to explain this remarkable abundance of carbon monoxide so close to the star. In the end, there was only one possibility: the gases are the remains of a gigantic collision. “Of all the scenarios, this is the only one that can explain all the features,” Schneiderman said.

crash
According to the researchers, the gas was released in a massive collision between a rocky planet – the size of Earth – and a smaller impactor. Presumably, the Earth-like planet was hit by this small object at a speed of up to 10 kilometers per second. This showdown took place around 200,000 years ago, so the star didn’t have time to clean up the gas. Given the amount of carbon monoxide the researchers detected, they suspect it must have been a blow. So severe, in fact, that one of the planets was – at least partially – dismantled from its atmosphere, which researchers have now observed in the form of gas.

Striped protoplanet
This means that researchers have now, for the first time, found evidence of violent clashes in young planetary systems. “This is the first time that we have detected a denuded protoplantar atmosphere resulting from a massive impact,” concluded Schneiderman. “A lot of people are interested in studying such collisions because we expect them to be frequent. However, we had yet to find any evidence for this. But now, through study, we get a better understanding of the dynamics. “

In this regard, this research is an important springboard for other scientists. Because the detection of carbon monoxide in other systems can also provide more information about their violent past. “We are proposing a new method to find giant collisions,” Schneiderman said. “In addition, we are now getting a better understanding of the behavior of debris after it has appeared. “