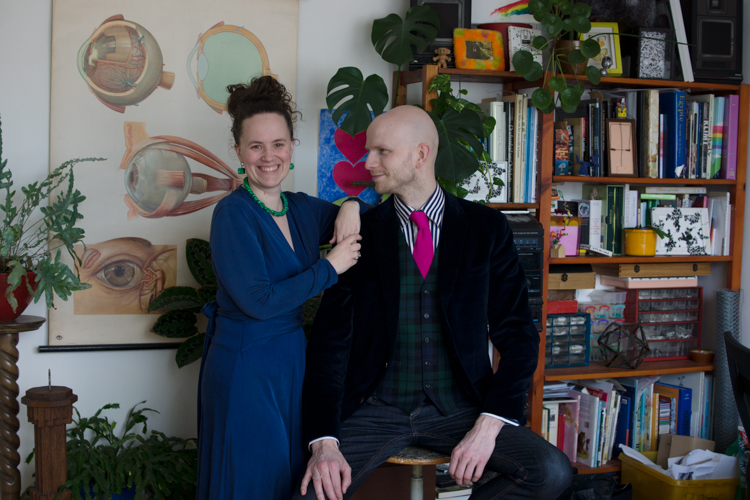 A move to the Hoeksche Waard: It was never a serious option for Rick and Veerle. Until they stumbled upon Maasdam’s house where they now live with great pleasure. “We don’t need to sleep next to the fridge anymore.”

They actually had a great time in Rotterdam. But slowly the lack of space started to deteriorate. Just like the noise in the neighborhood until early in the morning and even the police raids on the neighbors.

But back to the Hoeksche Waard? That was not planned. Veerle is originally from Oud-Beijerland and didn’t really want to go back. So they started looking for a house in Dordrecht, Spijkenisse and Den Bommel. Until this terraced house in Maasdam with a lovely garden becomes available. Maybe the Hoeksche Waard isn’t that bad after all, they thought at the time.

‘Exactly what we wanted’

Veerle: “We immediately had a good feeling. The location was nice and the garden exactly what we wanted. Everything had to be done, but we are not too afraid of it.

The 1969 terraced house is one of many houses in Hoeksche Waard and beyond. But inside, Rick and Veerle have left their own mark on it. Lots of vintage and art, lots of art. No wonder, because Rick and Veerle are both artists.

Sleep next to the fridge

“We are happy that we no longer have to sleep with a refrigerator next to our heads. This was the case in Rotterdam. There we had a small kitchen where the refrigerator no longer fits. So yeah, we had to find a creative place for it. Now the refrigerator is back in the kitchen. We can hardly imagine that we have slept with our heads next to a starter refrigerator for nine years.

A car is essential in the Hoeksche Waard, as they have agreed. This meant that Rick had to get his driver’s license two days before the move. But it also worked.

They were therefore very satisfied with no less than two workshops. Because they sometimes work together (and it works well), but they do most of the work separately from each other. And then it’s wonderful to have your own space. Rick: “Veerle won the battle for the most beautiful and the largest space.”

The house was already equipped to work from home and it continues to be useful now. Rick: “I have been used to working from home from a young age. At my parents’ house, I was already painting in my room. For me, it is not necessary to go elsewhere to work. In Rotterdam the whole house was taken care of with boxes and stuff, now the door closes well after work.

Lots of light and color

Veerle: “What I love so much about this house is the abundance of light. From the bedroom to the studios. We put a lot of work and time into it. It took several days to paint the wall near the attic stairs. But we are not afraid of color, so we had to build this wall. Vintage, color, art and details: that’s really us. “

Are you also very proud of your home and can we take a look inside too? Register via [email protected]