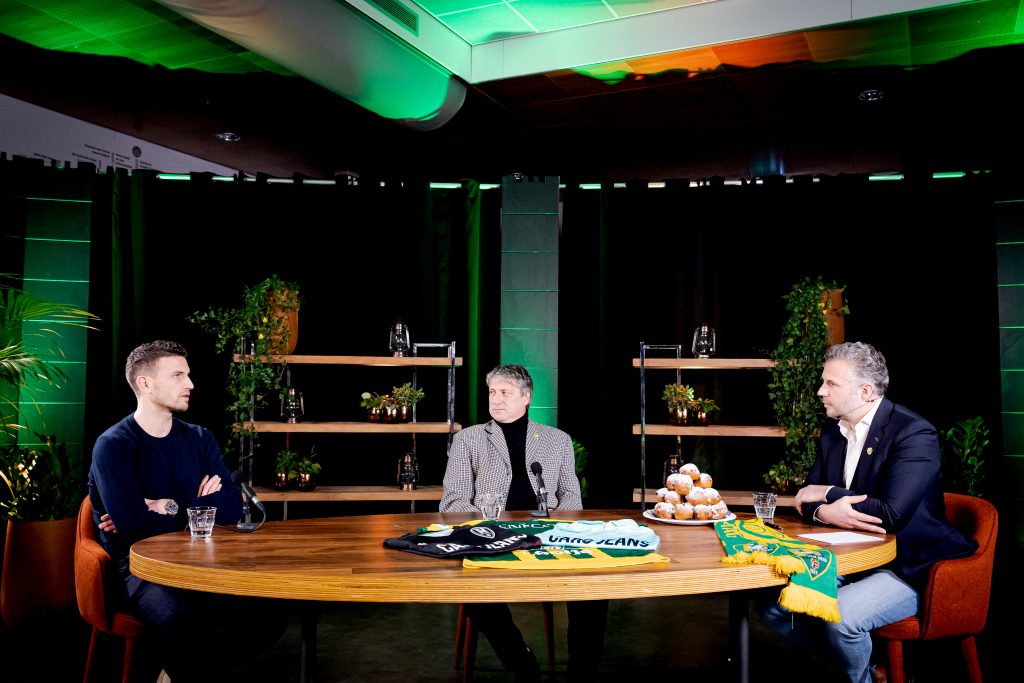 ADO Den Haag wishes you and your loved ones a happy, sporty and above all healthy year 2021. Unfortunately, due to the lockdown, it’s not possible to toast the New Year at the traditional New Year’s reception, but we’ve come up with a nice alternative. Friday January 8 at 8 p.m. was time for our special New Years Eve, which everyone can see on this page and through us Youtube channel!

Tijl Beckand with six guests
In ADO Den Haag’s New Years special, Tijl Beckand appeared as a table gentleman. The well-known TV personality, a big supporter of ADO Den Haag, received various guests as a presenter. They remembered the eventful 2020, but were also eagerly awaiting what 2021 has in store for the club. There was also room for special stories and funny anecdotes.

Ruud Brood and Daryl Janmaat
Head coach Ruud Brood and all new addition Daryl Janmaat were the first invited to join Beckand’s table. Brood tackles the question of what it’s like to be on the pitch as a trainer every day and talks about how he thinks he can find his way with ADO Den Haag. Janmaat speaks at length about his return to The Hague and describes how he sees the rest of the season ahead of him.

Sjaak Polak and Wesley Verhoek
After a long interview on the first team, it was time for two valuable veterans: Sjaak Polak and Wesley Verhoek. Two pure boys from The Hague, who were teammates at ADO Den Haag during the 2004/2005 season. In this block there was of course enough space for some great locker room stories and The Hague humor, to make the atmosphere of Verhoek and Polak feel as usual. Of course, ADO Den Haag Women, of which Polak is proudly the head coach, couldn’t be missed as a talking point. Verhoek also opened up about what keeps him busy right now, as an agent.

Mohammed Hamdi and Rob van den Beukel
The special story of Rob van den Beukel was at the heart of the third block. This passionate man has supported ADO Den Haag from a young age, has a great collection of club albums and tells an impressive story that shows that ADO Den Haag is more than just football. Beckand spoke with Mohammed Hamdi about the current state of affairs and the future of ADO Den Haag. The last word in the New Year’s Special was also for the General Manager.

At the end of the show, Hamdi got a special surprise for Van den Beukel, who received a three-year subscription as a token of appreciation for his support and his creepy story.