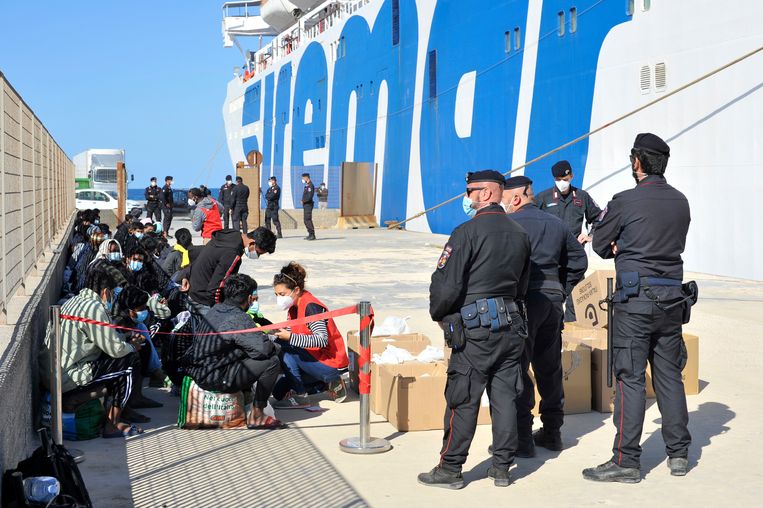 In the sunny streets of Lampedusa, teenagers eat a white sandwich with ice cream, a specialty of Sicily and the surrounding area. The old men sit down and talk, the women drag their laundry to dry. “Lampedusa is on the verge of collapse”, headlines the Italian media at the same time, after the arrival of more than 2,000 migrants and refugees on the island this weekend.

“An invasion,” say far-right politicians Giorgia Meloni (Fratelli d’Italia) and Matteo Salvini (Lega). Meloni even asks on social networks “a European military intervention” in the form of a blockade of ships. “What an idiot,” growls Salvatore Martello, mayor of Lampedusa, taking a puff of a cigar in his cluttered office.

According to the Social Democrat, the island can handle arrivals so far. Yes, the relief camp – once built for 250 people – will be overcrowded with more than 1,700 migrants on Wednesday, but it is only a matter of days, the mayor said. Due to bad weather at sea, only one vessel was able to navigate to take people to asylum seekers’ centers in Sicily or on the mainland.

A mile inland, hidden between the hills, behind the gates of the tightly guarded camp, are mostly young men, crammed onto foam rubber mattresses. According to the humanitarian organization Save the Children, there are nearly 500 unaccompanied minors and several dozen children with relatives. Most have left from Libya, says Mayor Martello, the rest are from Tunisia.

As life goes on for the people of Lampedusa, the only difference being the many police cars and army trucks crossing the island, a fierce political discussion is taking place at the national level. Is this an emergency in Lampedusa or not? And what will summer bring? With almost tempting alarmism, the Italian media write that on the Libyan coast 50,000 to 70,000 people are ready to leave.

In a restaurant in the center of the village, the islanders are fascinated to watch topical images of “their” jetty full of migrants, wrapped in thermal aluminum blankets. Hundreds had to spend the night there, awaiting their covid test and transfer to the camp. “Is it yesterday?” A waiter desperately asks. Even here, the issue of migration is far from their bed for many people. “We only see it on the news,” said one girl.

This does not apply to those who work at sea, like fisherman Salvatore Riso (29). His boat is right next to the pier where Coast Guard lifeboats dock. While fishing, he regularly meets boats with migrants in need, whom he is not allowed to help: it is even liable to smuggle human beings. “We are not shocked by the arrivals. This is nothing new, ”he said with a shrug.

The figures confirm this. Although arrivals are picking up after a long period of decline, which began after Italy’s signature of migration agreements with Libya in 2017 and reinforced by the pandemic, they are still much less so than during the great waves of 2011 and 2014 .

In recent years, Lampedusa has become a heavier bottleneck, as NGO rescue vessels are barely allowed to navigate. NGOs have often brought migrants from the sea directly to Sicily or to the mainland. Now that they are not there, running to the “middle station” of Lampedusa is the only chance of success.

The fight against NGOs was one of the pastimes of Matteo Salvini’s ministry in 2018, but it continues two governments later. Ships are often kept ashore under trivial administrative pretexts. “It is as if an ambulance is not allowed to drive because it has too many bandages on board,” says Marta Bernardini of the humanitarian organization Mediterranean Hope.

Salvini’s theory that NGOs as a “ferry service” were the main draw for migration seems to have been definitely overturned by the further increase in arrivals. Bernardini provided initial shelter on the pier and saw a young Somali woman struggling out of the boat, barely able to walk due to the abuse she had suffered in the Libyan camps.

People are fleeing the bad conditions in their own country, also says priest Carmelo La Magra. He has little understanding for other islanders who are complaining in the cafe next to his church that the tourist season is in danger of being lost because of the negative publicity. “Not we are in an emergency, but the migrants.” The island has its own economic problems, but they are not related to migration, says the priest. Lampedusa has been bearing this name for years and there is still an equal number of tourists.

Thursday morning, a ship of 600 people can finally leave for the mainland, 200 other people leave the island via a liner. The relief camp is picking up steam, but until nothing changes in European policy, we will have to wait for the cycle to repeat itself.

The new arrivals, the predictable political riot and displacement, after which the turmoil subsides until the next round. “It will be a hot summer,” predicts Bernardini. Isn’t it in Lampedusa, where most of the islanders hardly get anything out of it, than in Rome and Brussels.