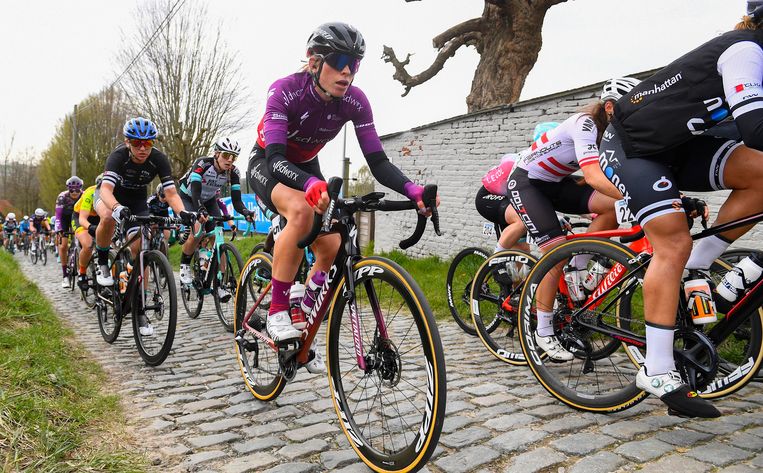 This week there are no in-depth newspaper articles about, interviews or reviews of Annemiek van Vleuten, Anna van der Breggen, Lotte Kopecky or Marianne Vos. Newspaper readers will think, “Who are you talking about?” Yes, that’s because there is hardly a Tour of Flanders race report for women on the sports pages. Then you don’t know the winner or the protagonists.

Nonetheless, the ladies mentioned above – along with my most stubborn employee – made me order my first racing bike when I was 40 with my knees shaking. It reminded me of the Tour du Faso, a big event in my home country of which I was a big fan as a teenager. Maybe I only use my new racing bike to go to the bakery so that I feel less guilty when I eat an eclair. But who knows, one day I might be able to explore some of the most beautiful roads in Flanders with it.

Now, a women’s cycle race has as much drama and tension as a men’s race. A 38-year-old wins the race for the second time after ten years, a favorite has material problems, burning gears on the Oude Kwaremont and the Paterberg. There really isn’t much of a difference between the male and female versions of this true sport where anyone who can kick the most, dose the best and strategically collaborate with the team wins. Our Flandriennes stumble as hard as their male counterparts.

Sports journalists and editors could also write about the Tour of Flanders for women. Yet they don’t. The argument is always that sports fans are not interested, that there is no demand for it. But to stay in economic terms, supply can sometimes create demand. Why could Kim Clijsters and Justine Henin become sports stars? Because they won, of course, but also because there was a lot of attention for them in the press. If tennis is possible, why not cycling and other men’s sports strongholds?

Why do sports writers not help eliminate this historic distinction, which is no longer justifiable? Create reports, create stories about these awesome cyclists. There is really a job here for sports journalists, here is an opportunity to do something tangible to achieve equality. Use your profession, dear sports editors, to change something essential. Make such good reports that the reader is transported.

It can also help to take a closer look at the composition of editorial boards. Maybe a few more women are needed for editorial meetings after all? So could sports journalism also attract more female readers? You may be leaving a whole reader potential untouched.

This is why my appeal to sports writers: make way for women’s cycling! If everyone tackles their own sector to ensure greater equality between men and women, we will get there. What do you think Guy Fransen, Aster Nzeyimana, Hans Vandeweghe, Bram Vandecapelle and Stijn Vlaeminck, are you pulling the cart?