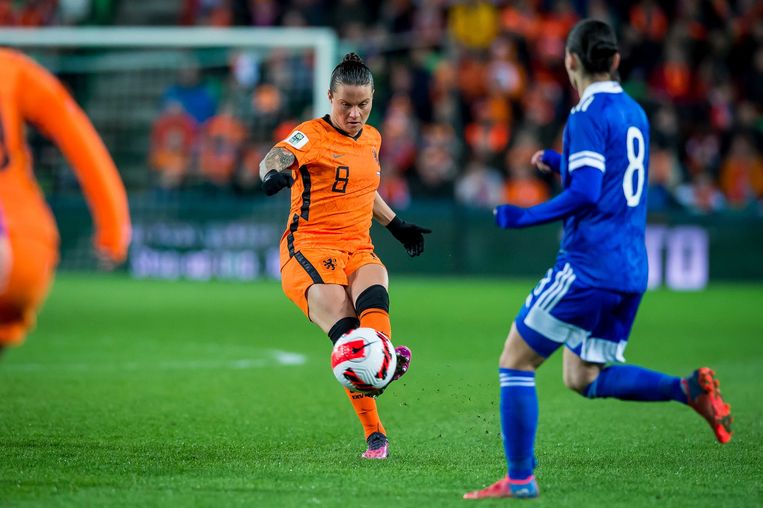 The question hasn’t even been answered yet or Sherida Spitse has already found the answer. “No”, resolutely replies the football star. She feels no difference from sixteen years ago when she was only 16. “On the contrary, I always feel like I’m getting fitter.”

Well, she has to do a warm-up these days, she’ll admit it. But for the rest, she does not actually realize that she is 32 years old. The midfielder doesn’t want to have an extra day off either. “It may be good sometimes, but it’s not in my system. I still want to continue.’

That’s how she always did and that’s how she got 199 caps. Tonight will be her 200th when she play against England with the Netherlands, the first training game ahead of the European Championship in July.

Spitse is not one to pat her chest. She thinks it’s “special” and can be very proud of it, but in the same breath she always involves her teammates, especially those from the past. “This generation has invested a lot in women’s football and we needed it to get to where we are now, to be successful. It’s something beautiful, something we can all be proud of.

His debut dates back to 2006, also in England and against England. Her career path shows how professional women’s football has become since then. Since last year she has been playing at Ajax, which didn’t even have a women’s branch in 2006, which was only founded in 2012. She played two spells at Dutch women’s football record holder Twente, who saw her leave twice for Norway. In 2013, Lilleström SK paid a transfer fee, a first for a Dutch football star. When she played her first international match seven years earlier, she was still in the B1 of VV Sneek.

“It was a tough match,” she recalled of her debut. “I didn’t think I was nervous, but on the pitch I noticed I was. I was also 16 and then you play your debut in a fairly full stadium.

There were nearly eight thousand spectators in the stands at Charlton, which saw England win 4-0. Spitse was substituted after 55 minutes. “I was thrown to the lions, but I thought it was nice. I had to show it, it won’t come to you.

Five years ago, the Netherlands met England in front of 30,000 fans in Enschede in the semi-final of the European Championship which they had won. The match was then described as the “real” final. England were one of the favourites, but the Netherlands won 3-0. Partly thanks to Spitse, who took two balls off the line.

At the European Championship, the pressure is again on England, where the football association is investing heavily in women’s football. The FA chose successful coach Sarina Wiegman of the Netherlands to win the title in her own country. The game against the Netherlands is a first indicator of the performance of the teams.

“But you can’t say much about that now,” says the international record. “It can very well happen upstream and not during a tournament, but we can also enter a flow. And we showed that we really are a tournament team.

With 200 selections, Spitse rose to 25th place in the international ranking of the most capped women. In comparison: Wesley Sneijder is the record Dutch international with 134 appearances (co-95th international). Women are slightly more likely to get high numbers than men, as they play fewer games at their clubs and more international (practice) games and tournaments. The record is held by Kristine Lilly with 354 games for the United States.

This number will be difficult for Spitse to reach, but she is far from considering stopping. She is in talks to extend her contract. “Ajax is my club and I really want to become champions. That’s why I come to clubs and I haven’t succeeded yet.

If it’s up to her, she will commit immediately for several years. She knew how to make football her job. And that remains special, especially for someone who grew up in a time when that was a very distant dream for women. “It’s the best thing to do.”

The Paris Olympics in 2014 are on the horizon. Spitse barely missed an international match in sixteen years, but she had to retire with an injury for the Tokyo Games. “Of course, it’s good if it can happen again,” she says. “Age is an age, it is a number. It’s how fit I feel and how much I like it. You don’t know, but maybe I can go on for another six years.