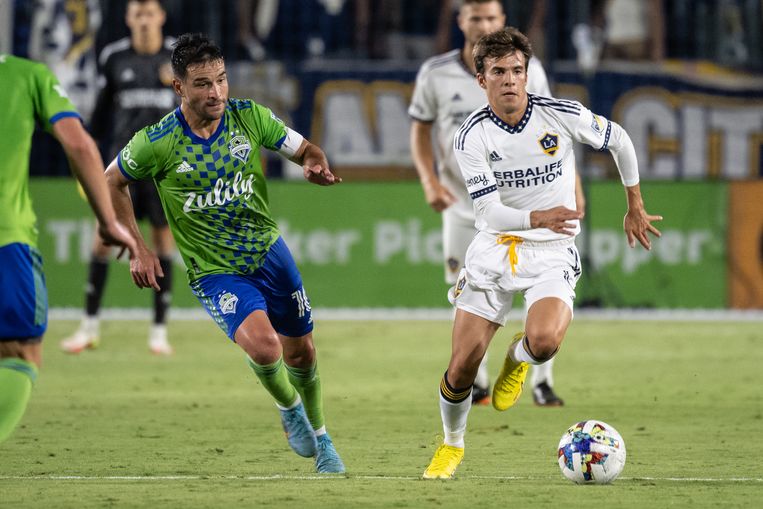 For years, the American soccer league MLS was seen as a last stop for shunned European stars, but veterans such as Gareth Bale (LAFC) and Giorgio Chiellini (LA Galaxy) are now exceptions. As the 2026 World Championship approaches in our own country, the competition is gaining in quality.

Relatives and friends of Riqui Puig thought he was joking when he told them he was going to play in MLS. The talented midfielder had been sidetracked by Barcelona but was still only 23 years old. His move to LA Galaxy surprised friends and foes alike. Puig made his Los Angeles debut on Friday.

“I think there will be more young players here in the near future and fewer older players looking to retire here,” Puig explained when he arrived in the United States. “This competition has everything to become one of the best in the world.”

In the summer transfer window, Italians Lorenzo Insigne (31) and Federico Bernardeschi (28) had previously come to MLS. The two European champions, hailing from Napoli and Juventus respectively, also moved to Toronto FC well before their expiry date. The club pays Insignia $15 million per season.

For foreign stars, it’s always good to win in MLS, but there’s no longer an advantage in the competition, where the work ethic is increasingly tied to technical ability. The MLS is proving to be a more attractive destination than before, and is also establishing itself as a breeding ground for young talent.

In the league’s 26th season, launched after the 1994 World Cup, a record number of players were signed and sold. The 28 clubs together have collected tens of millions of dollars in player transfers to European clubs, such as Peruvian Marcos Lopez at Feyenoord. The 22-year-old left-back played three seasons with MLS club San Jose Earthquakes.

“We are part of the global football ecosystem,” MLS boss Don Garber said earlier this season. “That was not the case before. In terms of transfers, we belong to the top 5 leagues in the world. (Garber’s words paint a slightly distorted picture: the league has 28 clubs and will expand to 30 in coming years.)

A change in philosophy is the basis for an increase in quality. Clubs are no longer blind to foreign star players. The New York City FC champion had Andrea Pirlo, Frank Lampard and David Villa on the pitch a few years ago but only found success after all three left. MLS is currently primarily a competition for young talent.

The clubs have had youth training programs for several years, in which a lot of money is invested. A national competition between youth teams, MLS Next, will begin next season.

The purchasing policy focuses on young talents, mainly Latin Americans, who see MLS as a springboard to major European competitions. A new arrangement will allow MLS clubs to offer young talent higher salaries, without counting them below the salary cap. In this way, European stars are also paid.

A next step in the growth of MLS seems to be the biggest challenge on paper: generating interest from a large audience. In terms of viewership – 20,000 on average per match – MLS can compete with European competitions, but American viewers are less interested so far. Last season’s finale watched just over a million people. Football clubs can mainly rely on local attention.

A new TV deal with Apple’s streaming service is expected to boost competition revenue. The tech giant will pay MLS a total of $2.5 billion for broadcast rights over the next ten years. For now, MLS is only the third most popular league in the United States. The English Premier League attracts more viewers, but the Mexican Liga MX can count on the greatest interest by far.

For a few years, MLS and Liga MX have started a collaboration, which will be reinforced next season with the Coupe des Ligues. All 29 MLS clubs (St. Louis City SC will make their debut next season) and eighteen Liga MX clubs compete in the world championship-style tournament, with group and knockout stages. The MLS season, which runs from spring to fall, will be suspended for a month before the tournament.

An eventual American winner will no longer surprise anyone. Not so long ago, the gap between countries was wide, but more and more MLS teams can compete with clubs from Mexico, the country with which the United States and Canada will host the world championship in 2026. For the first time this year, an MLS club won the Concacaf Champions League: the Seattle Sounders managed to beat the Mexican Pumas in two games. It was another milestone for the fledgling American Football League.