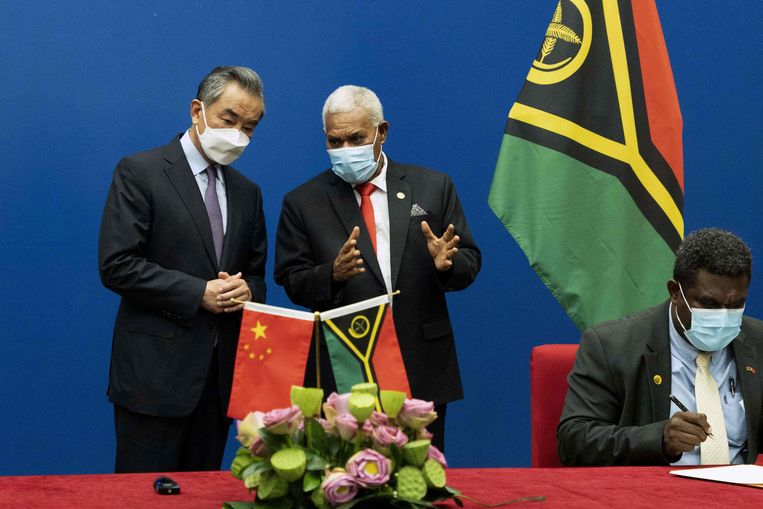 After ten days of diplomatic back and forth from island to island in the South Pacific, Chinese Foreign Minister Wang Yi did not return completely empty-handed on Saturday. His “miracle trip”, as Chinese state media calls his Pacific tour, resulted in 52 bilateral agreements with island nations such as Fiji, Tonga, Solomon Islands, Kiribati, Samoa, Vanuatu and Papua New -Guinea.

Tonga gets Chinese lab for police and disaster relief. Other islands have opted for Chinese investment in fishing or customs systems. But by signing Beijing’s hastily submitted “Common Development Vision”, a Chinese development plan specially designed for these island states, the islands have thanked them.

Last week there was suddenly a ready-to-use five-year plan to more firmly tie the chain of strategically located islands to Beijing. It should have been signed in Fiji last week. Beijing was apparently counting on these island states desperate for a big country to look after them, long neglected by traditional partners like Australia and the United States.

The Chinese opening does not come unexpectedly. According to the Australian think tank Lowy Institute, the region has already received $1.5 billion in Chinese aid between 2006 and 2017. In 2016, during a visit to Fiji, Chinese President Xi Jinping called on island nations to get on “the Chinese express train of development”.

In the past, however, Chinese efforts have mainly focused on recruiting islands that diplomatically recognize Taiwan into the People’s Republic of China camp. With US President Joe Biden, several coalitions against China Beijing apparently wants to show the Pacific that it too has mastered this art.

Not only is every island nation good for a vote in the United Nations, and Beijing’s friends often vote with China, but joining the Common Development Vision would make island nations dependent on Beijing for their security, jobs and internet connections. The possibility of Chinese police, security forces and warships becoming a household name on the islands has caused an international stir. The Solomon Islands already closed last month a far-reaching agreement with Beijingincluding a security pact that hosts the Chinese navy and provides local government with Chinese police and military personnel as needed.

The suspicions of Japan, New Zealand, Australia and the United States center on a Chinese proposal for a free trade zone with ten South Seas partners. Such an area could be an opportunity for China to position itself as a “security stakeholder” in this region, supplemented by an increased military presence. This radically changes the balance of power.

Small, poor and remote as they are, the rulers of the South Seas islands want to decide who to associate with at their own pace, rather than having the initiatives of others imposed on them. Especially now that China is categorically linking economic cooperation to a “joint” (i.e. China-designed) security policy. It’s relatively new. Prior to 2012, China was limited in this area to evacuating employees of state-owned companies from hotspots on the African continent and participating in international anti-piracy initiatives in the Gulf of Aden. In 2017, China’s first (and so far only) naval base in Djibouti became operational.

Following Xi Jinping’s international initiatives for global economic development led by China, the Chinese leader also recently floated an idea for a global security architecture based on Chinese principles. This plan focuses primarily on developing countries. The new offshoot of Xi Jinping’s thought is still in the early stages of vague and flowery language. What Xi wants in practice will only become clear in implementation, so a pact with a group of countries in a strategic location was the logical next step.

Garlands of exotic flowers, flags, a resounding final declaration: everything was ready to disseminate the Common Vision of Development in the world, with the exception of the heads of government of the countries of the South Pacific. Beijing may have overplayed its hand, wanting too much too soon without giving new partners a chance to consult with other countries in the region.

Furthermore, South Seas government leaders fear that the intense geopolitical interest in their region from rival geopolitical power blocs will do nothing to address their real problems. Scoring geopolitical points means little if your community is below sea level rise, your job has disappeared due to the pandemic, and your family is affected by rapidly rising commodity prices,” a Fijian Prime Minister Frank Bainimarama told Australian broadcaster ABC.

The discussion on cooperation with China has been postponed until next year. Not that the US-led pro-democracy Western bloc can now breathe a sigh of relief, because for China, delay never means adjustment. Now that Beijing has set its teeth in the Pacific, it is only a matter of time and patient negotiations to entice the islands to expand into more contentious cooperation in military affairs and cybersecurity. This failed attempt is only the beginning.