Photo: An illustration of the new village being planned. Image: municipality of Zuidplas

Watching what is possible is the message from the Municipality of Zuidplas and the Province of South Holland regarding the development of suburban areas in the Zuidplaspolder. In a televised debate, organized by ROm-Stadszaken as part of the Battle for Space debate series, the collaboration between the municipality and the province for the development of a new village is explained. A test case for construction in the lowlands of the Netherlands, with the complicated relationship between climate adaptation and housing shortage.

The construction in the central zone of the Zuidplaspolder has been discussed for fifteen years. In 2004, the provincial government already expressed its ambition for the realization of new constructions. There is now a concept development vision and a Masterplan with administrative agreements for a new village of 8,000 housing units. There is an urgent demand for suitable housing in the affordable segment for young people in the province and region, and there is considerable competition for space in lower areas.

In July 2020, the municipality of Zuidplas, the province of South Holland and Grondbank RZG reached an agreement with agreements on anchoring, the distribution of roles and, among others, the mobility policy for the development of the area. The latter party has selectively taken strategic land positions since 2004. The commissioners also intend to pursue this plan. Since then, research on the ground has been carried out and a plan has been prepared with what the village should look like.

Integrated plan for a circular village

During a televised debate on Wednesday 22 September, program director Martijn Niehof of Kuiper Compagnons, central area mission manager Marco van Lente van Twynstragudde, space manager Michael Burgmans of the municipality of Zuidplas and commercial director Alex Hekman of Sweco sat down to discuss their master plan. . for the idea of ​​a new village, what this means for the future of the region and how you manage the location of the polder. Albert Koffeman, project manager of the Smart Space Use program in the province of South Holland, digitally connected. The debate was moderated by Marcel Bayer, editor-in-chief of Stadszaken and ROmagazine.

“You need an integrated plan,” says Martijn Niehof of the project. “We want to build a circular village and start from the village community. The village must give impetus to the landscape and become a “clean water machine” by raising water levels and improving their quality. As part of the project, four new landscapes will be created around the village for recreation and the enhancement of landscape biodiversity. In this way, the village does not harm the surrounding nature, but rather renews the central area.

The municipality has opted for an active land policy and will develop the territory itself. “This makes it easier to direct and manage the objectives set,” explains Marco van Lente. There is consultation with the neighborhood municipalities and the province, which is responsible for infrastructure, regional housing programming and the ecological task. Albert Koffeman: “If you now look at the implementation of the development of the area in the Zuidplaspolder, you can clearly see that the province has many interests in its success. This was already the case in 2004, but now even more. ‘ The government will contribute fourteen million euros. A management and project team should work in a task-oriented manner.

The parties involved in the development of the village in the Zuidplaspolder also recognize that lessons must be learned from the recent catastrophic rains in Limburg, Belgium and Germany. Alex Hekman sees the rapidly changing summers as a point of attention. “This seems to be the new normal, so we need a climate adaptive approach with built-in flexibility.” The debate also revolves around whether or not to build in the Lower Netherlands with the possible scenario that it could flood in the longer term. But with this argument, building in the Randstad is also out of the question, according to debate participants. Doing nothing is not an option, they agree. 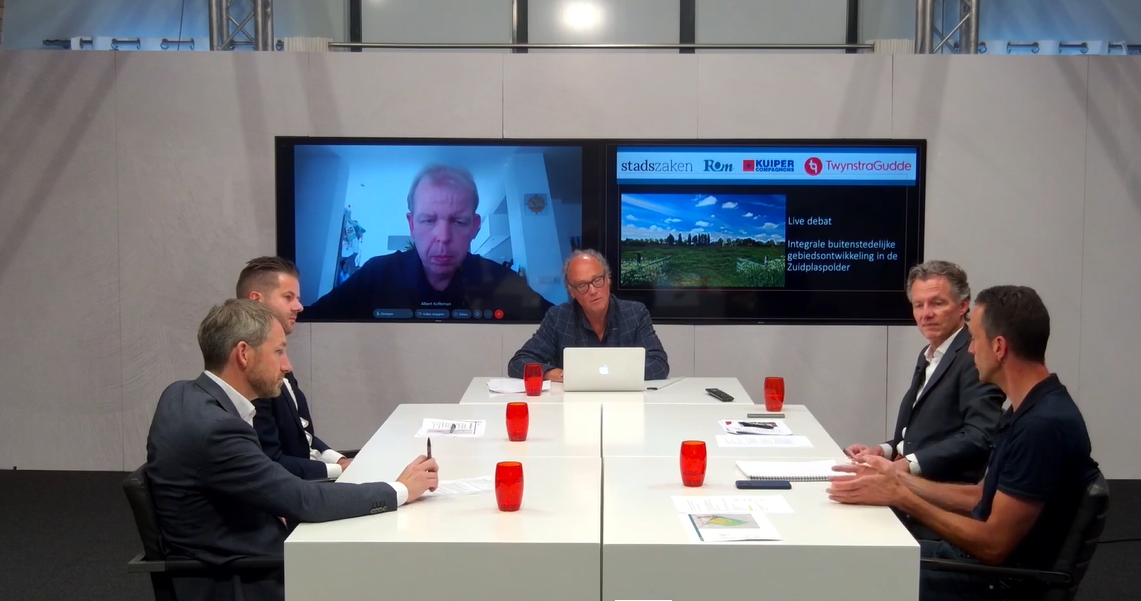 Participation of residents in the team of experts

The moderator Marcel Bayer also asks the participants a question on the experimental element of spatial planning. Aren’t house hunters themselves the experience of land use planning and is this irresponsible?

The village, which constitutes the core of the development of the area, does not yet have a name. This will be decided through a competition, according to Burgmans of the municipality of Zuidplas. In the coming period, the expert group will first look at the details of the village and local entrepreneurship. The first phase of construction of the village is scheduled for 2024.