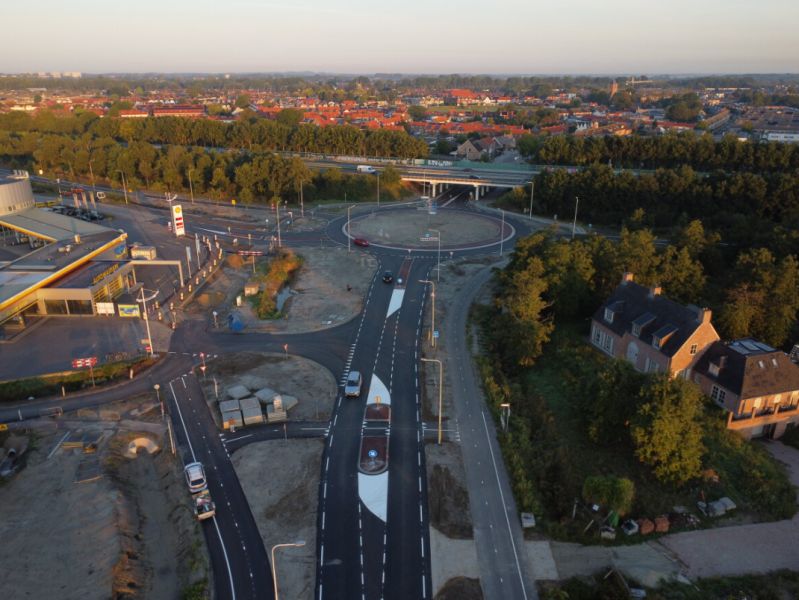 On Thursday 29 September MP Harry van der Maas and Alderman Coen Bertijn (Municipality of Vlissingen) the new roundabout on the N662/A58. They laid the last part of the 47 meter long cycle path along the roundabout.

The laying of this section of cycle path is the last part of the project at the crossroads Ritthemsestraat, A58 and MarieCurieweg. Thanks to the construction of the roundabout and the redevelopment of the Ritthemsestraat, the intersection is safer and traffic can flow more smoothly. It has been open to traffic since September 21.

Deputy Harry van der Maas: “We are delighted that there is finally logical and safe access to Ritthem and Oost-Souburg, to the A58 and to the Souburg 1 business park. A good example of a on the area in which we consider the interests of the region have sought, in good cooperation with Rijkswaterstaat, the municipality of Vlissingen and the surrounding area.

In recent months, a lot of work has been done on the new five-axle roundabout, which improves road safety and traffic flow. The roundabout is safer than the junction was, partly because cyclists no longer have priority over cars. The Ritthemsestraat has been renovated and speed reduction measures have been applied. A new bike path provides a safe route for school cyclists. The works were commissioned by the Province of Zeeland by the contractor KWS Infra BV Roosendaal.

The province of Zeeland has the ambition to reduce CO2 emissions in infrastructure projects. This was taken into account with the construction of the roundabout and the redevelopment of the Ritthemsestraat. For example, electric equipment was used, such as an electric asphalt machine, an electric mobile shovel and a roller. In addition, raw materials were reused for the asphalt foundation and a bike path was built from recycled plastic. This one plastic road is the first circular cycle path in Zeeland. The 47-meter-long cycle path saves 33% CO2 compared to a traditional asphalt pavement.