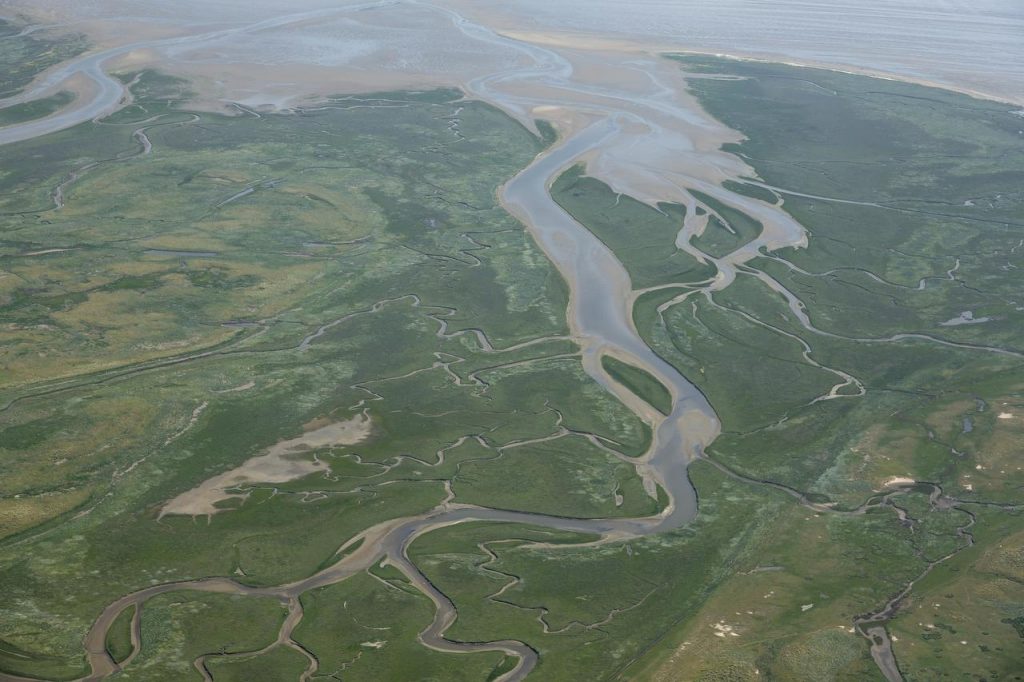 What would nature think about this? I think I know because straitjackets are generally not good for the development of nature. After all, it can create a diverse, safe and beautiful landscape through self-regulation. Human control is leading to a sharp decline.

What do we want?

The question is, what do we want with the Wadden Sea? Cherish it as it is now, protect it and maintain it as a World Heritage Site, so keep it in place and limit it? It is a reserve in the Wadden Sea. Or do we give it back the freedom, the resilience that helps us humans cope with unexpected changes.

With the dikes of the Wadden Sea, the momentum was lost, with all the consequences for the ecosystem

Will this beautiful place soon be surrounded by an emaciated northern clay shell, boring to the end, without birdsong or nature? And on the north side, it has become a dumping ground for large wind turbines, which should help our economy on hydrogen, and other things that should mainly be kept out of sight?

Also read: The economy too often takes precedence over the nature of the Wadden

With the dykes of the Wadden Sea, the momentum was lost, with all the consequences for the ecosystem. In addition, the spatial quality has deteriorated. After all, outside the reserve there is room for ports, wind turbines, power plants, light, sound and soon also solar fields.

Is there an alternative? Can we sketch out a truly new perspective that provides answers to the great challenges and uncertainties of the near and distant future? From two thirds less to two thirds more nature, an extension of the Wadden Sea? Which is then three times the size of the current one. If we want, we can.

The new cabinet is expected to fundamentally rethink the position of the Wadden Sea and shift its focus from conservation to expansion, less defensive, but gradual. After all, if this area is truly that valuable, then should we be doing more, instead of trying to perpetuate what already exists?

I propose that the new cabinet cherish three Wadden seas: one in the north, one in the center, and one in the south.

1. The northern Wadden Sea consists of the foreland, north of the islands, where large-scale versions of sand motors and Markerwadden are planned and where nature can exert the power of self-regulation. ‘a new nature reserve, made up of sandbanks and islands, wetlands, canals and arbors, and its resilience provides excellent protection against possible sea level rise and storms from the northwest.

2. The current Wadden Sea will become an inland sea, with calm dynamics, where sedimentation can take place regularly, sand and mud are introduced and mud flats and plateaus form where migrating birds feed and spawn. Pisces. A magnificent and peaceful landscape, where the rough sea is called to calm down.

3. The southern Wadden Sea will have space on the old land behind the current dike. Sea water is reintroduced and forms new brackish, saline and sweet ecologies, allows the land to grow with sea level and feeds food production with new conditions. Here, lobster farms can thrive, saline crops make salinization an opportunity, and sturgeon, eel and salmon can migrate from sea to land again and vice versa. The ‘Mother Zernike’ plan, a proposal for a long-term adaptive landscape of North Groningen that was made as part of the Climate Adaptation Summit, shows that our farmers can earn twice as much money in this way on 40% of current productive land. . Moreover, it shows that a reversal of ecological decline to growth is possible in the 60 percent of the land that is suddenly released as a dynamic wetland, a mudflat landscape, for example.

In this way, the Wadden Sea will be three times larger and we are finally restoring two thirds of the biodiversity that we have taken from our environment. The plan of “Mother Zernike” shows that it is possible, but also that revolutionary spatial planning is necessary. The new cabinet could, and should, focus on this.

A Wadden dike at the delta protects the Wadden Sea. Photo: Shutterstock

Ask the most innovative thinkers in ecology, coastal management, agriculture and space to craft a plan created with the people of the region and offering perspective to the people who live there, live there, currently working and cultivating there.

Fear not, Cabinet, but be tough, the Wadden Sea deserves it, for it enjoys a toughness that can turn unruly circumstances in its favor. Provide space and set up an “issued spatial perspective” as a new portfolio within the Wadden Academy, so that the importance of the beauty of the three Wadden seas is promoted and not the sum of partial interests becomes the same.

Trust the natural power of the sea, ecology and the elusive interplay of water, weather, sand and wind

Then start with three experiments, one in each Wadden Sea, where design, response and dynamics are tracked and can be adapted to new circumstances or results as needed. A cool sandbank north of Terschelling, a tidal plain in the western Wadden Sea, and a small hole in the north sea dike north of Kloosterburen. Test this, redesign it, then increase it.

And, government, dare to choose the resilience of the Wadden themselves and have faith in the natural strength of the sea, ecology, and the elusive interplay of water, weather, sand and wind.

Dr. Rob Roggema is a landscape architect, adaptive spatial planning consultant and owner / director of Cittaideale and professor of spatial transformations at the Hanze University of Applied Sciences in Groningen

This article is part of a preparatory series for the debate by the leader of the Northern Party. Find out more at www.frieschdagblad.nl/debat. Also watch the Northern Party leaders’ debate directly on February 8 at 3:30 p.m.