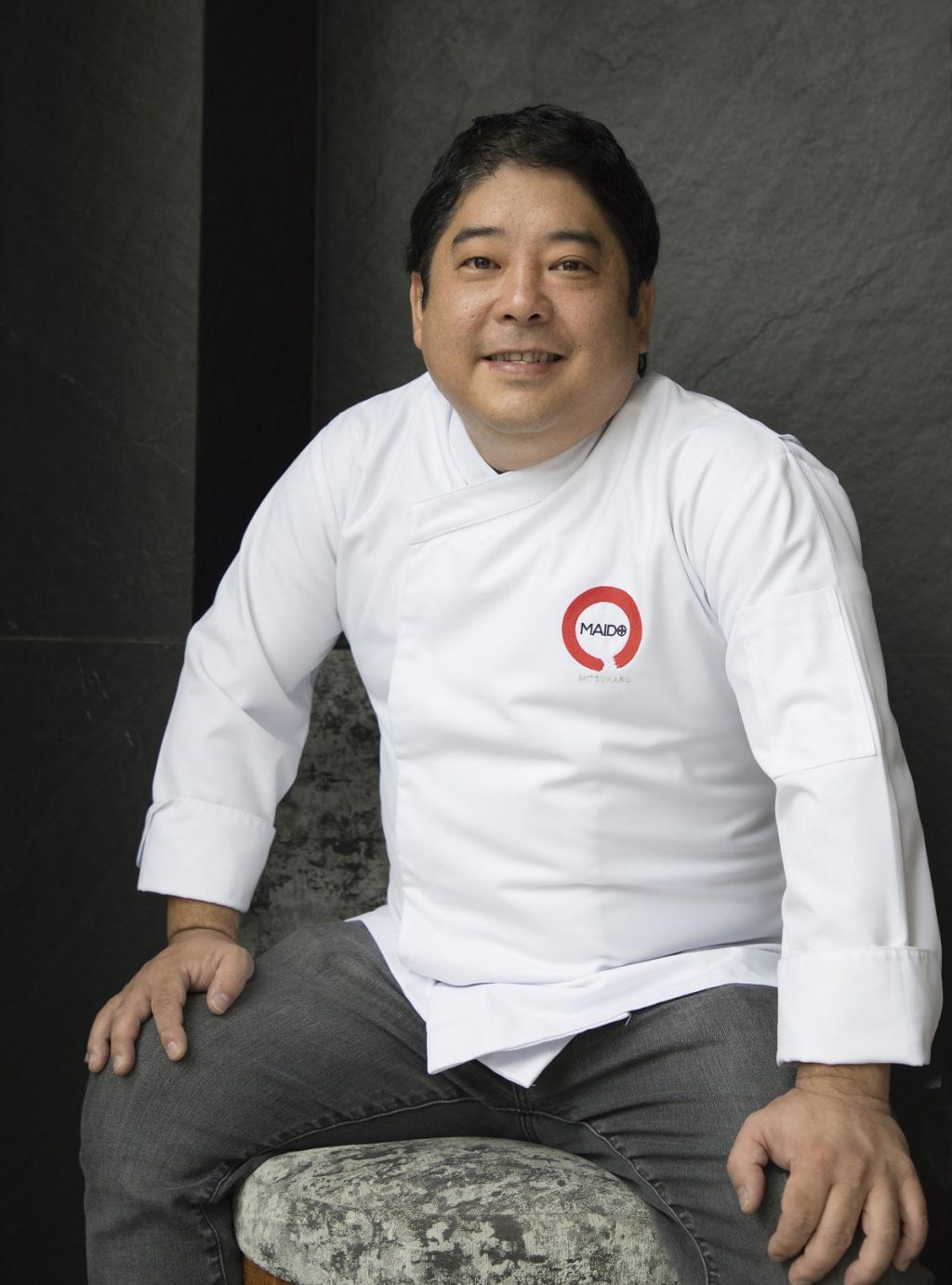 It fell just outside the top ten best restaurants in the world this year, but 11th place is more than enough for a conversation with chef Mitsuharu Tsumura of Maido in Lima, Peru.

Japan and Peru are not immediately next to each other on the world map, but since the turn of the 20th century many Japanese have migrated to South America. They are called Nikkei and the cuisine in which the flavors of the two cultures come together fantastically has the same name. Chef Mitsuharu Tsumura of the Maido restaurant in Lima, the son of Japanese parents, is considered in the culinary world as an absolute authority on Nikkei. And for many years, he has been cooking his restaurant at the top of gastronomy with this style of cooking.

“I was interested in everything related to cooking from a very young age. Television played a major role in this. When I was eight, over thirty-two years ago, there were two popular cooking shows in Peru. One was with the famous Teresa Ocampo, who cooked mainly Peruvian dishes, but also occasionally European dishes. I remember watching television and writing down all of its recipes in a notebook. After the show ended, I went into the kitchen and tried to recreate these dishes. It didn’t all work out well, but I really enjoyed doing it.

Bringing Japanese and Peruvian influences together in one dish is the essence of Nikkei cuisine.

What struck me the most was that these chefs were always joking on TV and there was a very happy atmosphere in their kitchen. As a result, I came to associate cooking with happiness and pleasure. I think that’s the main reason why I fell in love with cooking. Ever since I was little, I wanted to please the people around me. It made me happy myself. And very quickly I realized that the kitchen offered me this opportunity.

Moreover, a lady named Maura also played a major role in my later career choice. My parents both worked a lot and didn’t have time to cook. Maura came to our house every week on Saturdays to cook all week for our family. I was allowed to help him with that. I peeled my first onion with her. I still have very good memories of that time. Later, I went to cooking school. My father, who was traditionally Japanese, insisted that I go to college. At that time there was only one place in the world where you could get a college degree in cooking and that was in Rhode Island. So I ended up learning the trade in the United States.

How did you discover Nikkei cuisine?

“It happened very spontaneously at home, which is comparable to how cooking came about. My dad was very picky about what he ate and wasn’t really open to Peruvian cuisine. Traditional Japanese cuisine was therefore prepared for him. But these dishes came together at home with typical Peruvian dishes prepared for my mother and myself. During dinner, we started mixing all the dishes together and the two cuisines came together. It also happened more often and more often during cooking. Japanese stews were prepared, but they were flavored with Peruvian spices. Bringing Japanese and Peruvian influences together in one dish is the essence of Nikkei cuisine. For lunch, I often took onigiri to school. These are rice balls wrapped in nori seaweed. In Japan they add tuna, my mother used to add fried chicken, which is one of the most typical Peruvian dishes. This is how the Nikkei cuisine was created. People first made it at home, but later restaurants started cooking this way.

One of Peru’s most famous dishes is lomo saltado. Beef, onion, garlic and bell pepper are prepared in a wok at high temperature with soy and vinegar. It’s Asian cuisine. Wok did not occur anywhere in South America. And soy, found in every Peruvian kitchen these days, is either Japanese or Chinese. Our cuisine is made up of influences from other regions and cultures. We’ve taken the best elements of our immigrants’ cooking style and made it our own. For example, Peruvians traditionally did not eat octopus. Only sole and bass were popular here. They are Japanese migrants who also taught us to eat other fish. The very first restaurant in Peru specializing in seafood and fish was opened by the Japanese around 1950. In this case, the foundations were laid for one of the most typical dishes of Peruvian cuisine: ceviche. This cross-pollination between Japanese and Peruvian culture is for me the essence of Nikkei cuisine.

Do you use a lot of Japanese products in Maido?

“The Nikkei style is also extensive there and we opt for a combination of Japanese and local products. I still get into nori, kombu, katsuobushi, soy sauce, and wasabi. Our tuna also always comes from Japan. But I just buy all the other fish locally. Because I attach great importance to the origin of the products I cook, I buy directly from fishermen. Most of the fish we use at Maido comes from northern Peru, near the border with Ecuador. The rest we get in the Pisco area. I think it is important to work with wild products. I try to avoid cultivated products as much as possible. Of course, I also buy vegetables on site. In spring, for example, the quality of fruits and vegetables in the Andes region is phenomenal.

Is the Maido menu adapted to the best products and when?

“My approach has changed in recent years. I followed the seasons. With the climate we have in Lima, it often feels like the seasons intertwine. So I no longer follow the seasons so intensely, but change my menu dynamically, depending on the products that can be found at the moment. If the quality of the sea urchin is good, we will do something with the sea urchin. Products inspire us every day. Although there is always a certain theme in our menu. Currently, it is the Amazon region in northern Peru. I go regularly to this region and I have a house there. I like to fish there myself and get out into nature. I thus discovered products that are not known at all in Lima. I think it’s great to create a dish with it.

How does this creative process work?

“In the evening, just before falling asleep, I often have inspiration. My brain then seems to work better. I immediately post everything in the WhatsApp group with our creative team so they can start brainstorming as well. The advantage is that I can taste a dish in my head. In this way, this creative process can largely take place in my head. Inspiration can come from many different things. Travel often inspires me in this way. But it’s also quite possible that in the evening I watch Netflix and see something on a show that spontaneously creates an idea for a dish. Street food often inspires me. I find it fascinating to take a simple dish to the level of fine dining for Maido.

Your unique cooking style has earned Maido numerous awards and 11th place in the World’s 50 Best Restaurants. What does that mean?

“When I started Maido 13 years ago, I just wanted to open a restaurant that would always be full and that I could make people happy. I don’t think you should think about how to win a trophy if you haven’t started playing the game yet. If you as a chef try too hard to win prizes, you will never succeed. Because then all your energy will be spent on this, and not on taking care of your guests. It’s wrong. Just make the most of every day. I want to be able to look back on my day at the restaurant in the evening before I go to bed and be happy with what I’ve done for the customers. If you do this regularly every day, the rewards will follow automatically. But of course we are very happy with the rewards we receive and that also motivates us. For me it is a confirmation that we are on the right track with Maido. This makes me happy, not only for me, but also for our country. The more restaurants in Peru that receive these kinds of awards, the more tourists will come here to experience our cuisine. It helps our economy move forward.

A dish must first be tasty, only then should we worry about how it looks.

Have you noticed that you get other customers in your restaurant because of these kind of rewards?

“That’s absolutely the case. Our clientele has become very international. We noticed it especially during the pandemic, when tourists couldn’t come to Peru. Yet we still have many local guests. I estimate that currently about sixty percent of our customers are foreigners. Before the pandemic, it was even eighty percent. As we still have many local customers, we also continue to cook à la carte. They come regularly and don’t want to eat the full menu every time. Working à la carte at this level is not easy, but I have a large and solid team that allows me to continue to do so.

How do you want guests to remember Maido?

“I want them to remember that they enjoyed my dishes. I like the distinct flavors myself. I work with very reduced sauces, there are smoky notes, sometimes the dishes are even spicy. The taste is the most important. A dish must first be tasty, only then should we worry about how it looks. Good food is the main thing. If people remember, we succeeded.

Anyone wishing to sample Nikkei cuisine in Belgium has been able to do so for a few months at the Lima Nikkei in Antwerp. You will be greeted by Mayra Linares, who is standing in the kitchen next to Luis Garcia. They combine Japanese techniques and Peruvian flavors. “Luis started making sushi and ceviche for friends back home, and we started a catering business during lockdown. When the idea of ​​starting a restaurant germinated, Diego Salas joined the team. He was born in Lima, but emigrated to Spain and ended up at Pakta, Albert Adria’s Nikkei restaurant. While he was working there, he even did an internship at Maido in Lima, so you understand that we are happy to be able to bring him here. Chief number three, Carlos Yoshimura, contacted Mayra and Luis when he heard they were opening Lima. “He himself is Nikkei: Peruvian, but of Japanese origin.

On the menu you will find sushi, but with a Peruvian twist, and of course traditional ceviches. “As it should be,” says Mayra. “We know the public, so we make sure that our dishes are not too spicy, but that they are authentic. So a ceviche doesn’t just mean a squeeze of lime on the fish, but a real tiger leche marinate the fish. And our karaage is traditional Japanese fried chicken, but with a Peruvian sauce on the side. This makes Lima Nikkei the perfect place to experience this cuisine.