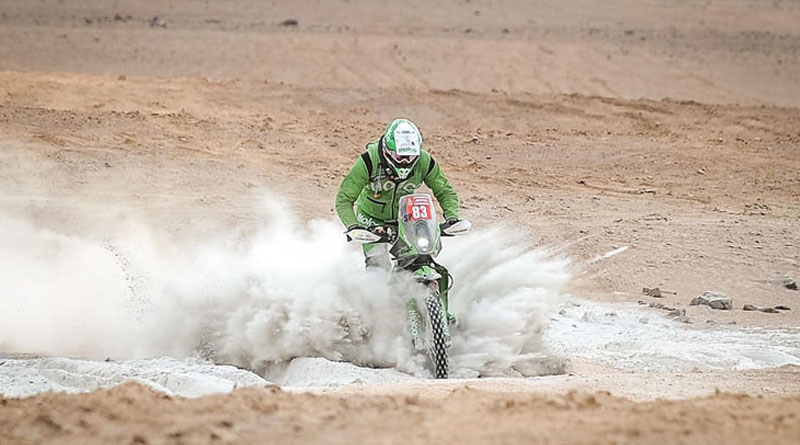 From the moment you walk into Drutense Molco’s office, you don’t have to be an Einstein to see what director Sjors van Heertum is passionate about. On the walls, action photos on various rally motorcycles. Pontifically parked on the floor of the workshop the green motorcycle with which he drove his last Dakar in 2019.

However, the quadruple participant in the Dakar is not a home owner. He grew up among trucks. Be around 10 years olde the two-wheeler entered the life of the young Van Heertum. “I’ve always played with mopeds, I loved it. My dad didn’t like and didn’t spend a dime on me. Then I thought: if I make money later, I will buy an off-road motorcycle. I was almost thirty when I bought my first one, at least with Frits van Eerd (owner of Jumbo, MR) who had just taken over a motorcycle shop. This is how it started; a little enduro with a group of friends. Frits went to train in Morocco in 2011 and said we could come if we gave the bikes to the group of friends. Crossing the African dunes, what could be better? It was also a silent wish on my part. After that, we wanted to drive a rally together. Anyway, then we would need other engines, rally engines only have thirty liters of fuel on board.

“I am the director of Molco Car Parts. I took over the business five years ago. We offer a full range of original and spare parts for passenger cars and small commercial vehicles. That’s more than 1,300,000 car parts and accessories, spread over 400 groups of articles with more than 250 brands. ”

Van Heertum continues: “These bikes have come and the next step has been: maybe one day we can drive Dakar with these things! This plan was also carried out and in 2014, 2015 and 2016 I left Dakar. My buddies thought it was gorgeous after three times, I just wasn’t done yet. I especially like the combination of driving, desert reading and boating. It is precisely this combination that makes it so exciting for me: the great adventure. The great thing is that you can compensate a lot with smart navigation. Although in many cases it also has to do with luck. ”

His best result on the Dakar was in 2019: “I became 3e in the classification of the breast, it means that you have to do everything yourself and have no assistance. You, a box with stuff and a tent. That’s all. This place on the podium was completely unexpected, as I had fallen on the third day and my arm had hardly risen. I also bruised my ribs. Anyway, I absolutely wanted to continue. Looking back, it was not smart, although I am certainly proud of this participation in Dakar. It took me six months to recover. It was actually a great misery, but I absolutely would not have wanted to miss it.

“In addition to Dakar, we have done a lot more great things with the group of friends and together we are driving the most beautiful rallies all over the world. We crossed New Zealand, three weeks in Australia were on the program and we crossed three African countries. The last time we drove through Brazil together and six months later we drove from Bolivia to Peru. Last June we wanted to drive from Peru to Colombia, but this was canceled due to the crown. Now we’re supposed to go to Baja, a peninsula near Mexico. From there we want to go to Las Vegas. ”

Why does he like to do everything on his bike? Laughing contemptuously: “It’s harder than in a car and I like to challenge myself, like continuing to raise the bar. I particularly like challenges. Plus, you don’t have to tow an entire team per motorbike. It is no longer a hobby for me. You prepare your motorcycle completely in advance and then – if you don’t fall down and have a breakdown – you can travel 5,000 kilometers. I’m in good shape and I do a lot of sports so I can handle a lot of things.

A very special race was in 2018, a so-called Extreme Enduro, the RedBull Romaniacs. “You go up and down in such a way that it works too”vertical madness‘ is called. Then you only drive 100 km a day, but you’re on the road for 10 hours! To illustrate: I burned 6000 calories during a half-triathlon, about 7000 calories during a hard day in Dakar and at Romaniacs I was 13000 calories!

For the director, this hobby is perfect to clear his head. “As soon as I get on the bike, I don’t think about anything else. It is also not possible because you have to be so focused on what you are doing. I would really like to participate with Dakar if I can. Either way, the next generation is already impatient. I have two boys aged 16 and 17 who I often do cross country races with. They now also want to drive Dakar. Good. Not very surprising with such a father, eh. But if I’m really happy … “