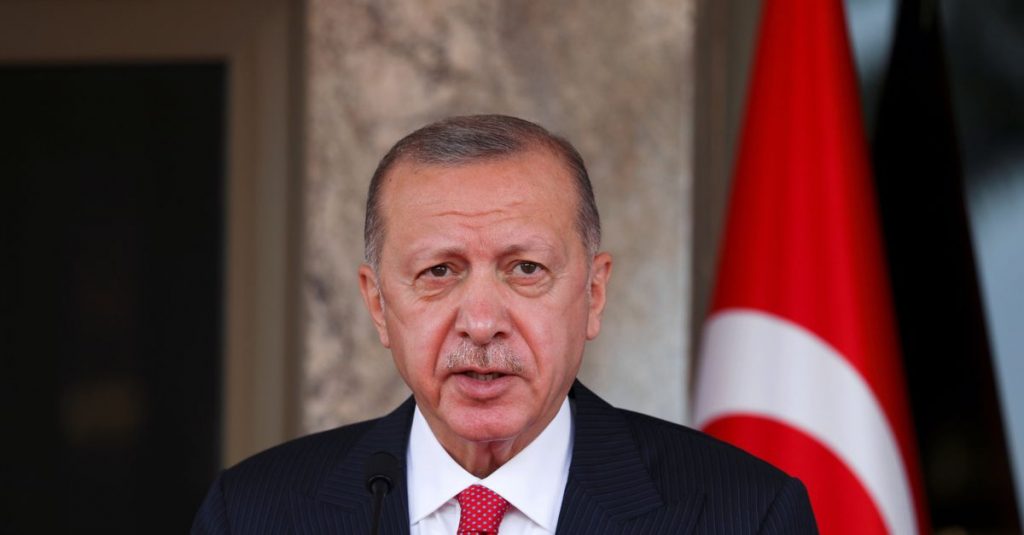 Turkish President Erdogan refined his relations with ten Western countries, including the United States, Germany and the Netherlands, in unusual ways over the weekend. He did so by declaring the ambassadors of the ten states as unwanted foreigners during a speech. His anger was awakened by a declaration of the envoys last Monday, in which they called for a “fair and speedy settlement” to the trial of famous Turkish businessman and philanthropist Osman Kavala. He has been locked up for four years.

Affected countries have so far reacted with restraint to Erdogan’s startling announcement, which he made on Saturday in a speech to his supporters in the Anatolian town of Eskisehir. Several countries later said that they had not received official confirmation that their ambassadors had been declared persona non grata. In principle, such a declaration means that someone must then leave the country. Erdogan himself, however, did not mention a deadline by which diplomats should leave Turkey. A declaration of persona even grata for such a large group of ambassadors is very rare in diplomatic relations.

It looks like behind the scenes efforts are being made to close the rift Erdogan appeared to be driving on Saturday. According to Turkish analyst Soner Cagaptay of the Washington Institute for Near East Policy, the president’s decision also goes against the advice of his staff. “Now they have to clean up the mess. At this point Erdogan is the political equivalent of the uncle embarrassing everyone at your Christmas party, “Cagaptay tweeted. Perhaps more clarity would come on Monday, when the Turkish cabinet meets.

However, according to other analysts, it is not excluded that Erdogan maintains his positions because he feels personally deeply hurt by the attitude of Western countries. The lingering case against Osman Kavala has been causing friction between Ankara and Western capitals for years. Kavala is suspected by Turkish justice of wanting to overthrow his government. He was allegedly involved in the so-called Gezi protests in 2013 and also the failed coup against Erdogan in 2016, although no evidence was ever provided. Kavala was briefly released in 2020 after a judge ruled there was not enough evidence against him about the Gezi protests. Immediately after, however, he was arrested again on a new charge.

Prior to his arrest, Kavala, the descendant of a prominent Istanbul business family, was known for his commitment to democracy and civil rights. He also created Anadolu Kültür, an organization of cultural activities aimed at promoting mutual understanding between Turks, Kurds and Armenians. In addition, Kavala was active as a board member of the Turkish branch of the Open Society Foundations of Hungarian-American billionaire and philanthropist George Soros, one of Erdogan’s favorites for years. Blacks beasts. The Open Society Foundations are no longer active in Turkey since 2018.

“Deriving from the Turkish government”

European governments, as well as the European Court of Human Rights and the Council of Europe, have repeatedly criticized the way Turkish authorities have handled Kavala’s case. The President of the European Parliament, David Sassoli, tweeted on Saturday“The expulsion of ten ambassadors is a sign of the authoritarian drift of the Turkish government. We will not be intimidated. Freedom for Osman Kavala. Also deputies as Sjoerd Sjoerdsma (D66) and Kati piri (PvdA) expressed its support on twitter for the position of the ambassadors.

During his speech on Saturday, Erdogan denounced the ambassadors, who he said had gone far beyond their limits with Monday’s criticism. “Where do they think they are? (…) It is glorious Turkey. You can’t come here and give directions. On Tuesday, the Turkish Foreign Ministry had already called on the ambassadors to account on the same issue.

Turkish analysts are somewhat in the dark as to what the Turkish president hopes to achieve with his latest move. Erdogan’s policies towards the United States and the European Union have often been erratic in nature, but this move also seems to go a long way for him. Earlier this year, Erdogan appeared to be seeking a rapprochement with European countries, as he feared a deterioration in relations with the United States after Joe Biden took office in Washington. Erdogan is expected to meet Biden next weekend, on the sidelines of the G20 in Rome.

Erdogan often seems to be driven primarily by national motives and, especially as elections approach, he seeks confrontations with Western countries in order to present himself in Turkey as the man who defends Turkish national interests and strong leadership. But the next presidential elections in Turkey are not scheduled for more than a year and a half. He may be trying to bolster his declining popularity with this case.

However, the timing of another confrontation with Europe is unfortunate now that the Turkish economy is in dire straits. The Turkish lira has already lost almost a quarter of its value this year, inflation is on the rise and the important construction sector is partly at a standstill. Opposition leader Kemal Kilicdaroglu therefore accused Erdogan of playing with fire, because economic ties with Europe are of great importance. According to him, the president threatens the expulsion of the ambassadors “to plunge Turkey into the abyss”.