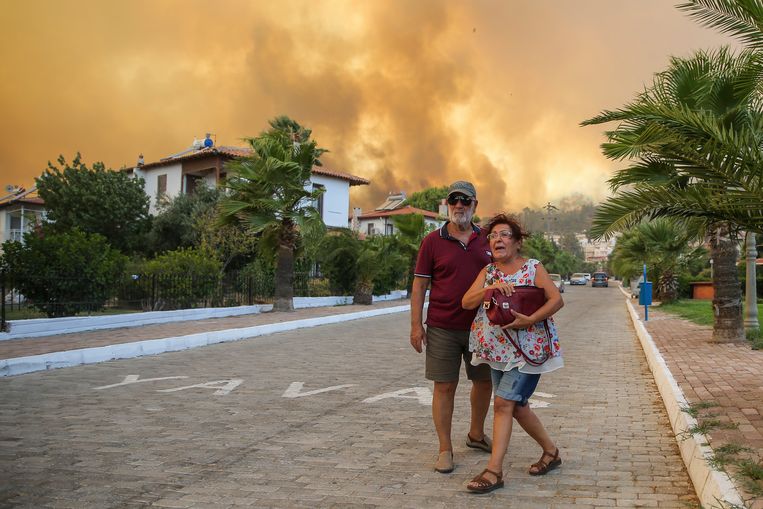 The victims fell in Turkey, where since July 28 extreme forest fires have reduced much of the Mediterranean coast to ashes. It concerns more than two hundred fires, mainly in the south and west of the country. Thousands of people were evacuated, including many tourists who were brought to safety by boats.

In dozens of places, the fires have not yet been brought under control. High winds and the lack of helicopters and firefighting planes allowed the blaze to spread easily. On Thursday, the Turkish coastguard evacuated hundreds of civilians living near a burning power plant in southwest Muğla province.

Under the hashtags #pray for the turkey in #Turkey is burning (Turkey is on fire) Photos and videos of the disaster are being shared on social media. The footage shows how the blaze threatens to engulf Turkish villages and resorts, while ordinary citizens use buckets of water or sand shovels to fight the flames.

Many Turks are furious at President Erdogan for saying he would do little to fight the fires. According to them, the authorities are only watching the local population fight the blaze. Erdogan admitted last week that the government did not have firefighting planes, but insisted the situation was “under control”.

Mayors in affected areas said they were unable to contact authorities and are desperately using social media for help. “We beg you: let the state take its responsibilities and save the people from this suffering,” the mayor of Milas said in a video. In a similar video, the mayor of Bodrum called on the government to accept foreign aid. “Please listen to us, we are in dire need of help.”

The Turkish population is also asking for international help via Twitter. An article titled “Help Turkey” circulated a lot. Presidential spokesman Fahrettin Altun condemned the campaign, tweeting that aid was not needed: “Our Turkey is strong”. According to the prosecutor, who has opened an investigation into the information, some social media accounts are trying to create “panic, fear and anxiety” and to humiliate the Turkish government.

Eventually, the authorities gave in. So far, firefighting planes and helicopters from Azerbaijan, Iran, Russia, Croatia, Spain and Ukraine have come to the rescue. Slowly it becomes clear how great the devastation is. Foreign Minister Cavusoglu told a press conference on Thursday that more than 1,000 families had lost their homes. According to the European Forest Fire Information System, nearly 160,000 hectares of forest have already been burned this year, four times more than the average in one year.

In Greece, forest fires threaten the capital Athens. Hundreds of people were evacuated on Friday morning. According to Greek media, it was 20 kilometers from the center. The fire has already engulfed dozens of homes in villages and suburbs on the city’s north side. The situation appeared to be under control on Thursday, but a westerly wind then fanned the flames again. The emergency services went door to door to warn everyone.

Temperatures during the heatwave, the worst in Greece since 1987, soared to 45 degrees this week. According to authorities, at least 86 new fires broke out in the dry nature on Thursday, in addition to the 100 fires that have already ravaged the country. The government decided on Thursday to increase the military’s commitment to a frantic effort to bring the fires under control.

In the Peloponnese, firefighters defend with all their might ancient Olympia, the place on the peninsula where the first Olympic Games were held in 776 BC. Local authorities dug trenches around the archaeological remains to keep the fire out. 52 fire trucks, four helicopters and two firefighting planes were also deployed.

Civil Protection Minister Michalis Chrysochoidis on Thursday thanked the “courageous” firefighters for their commitment to protect the UNESCO World Heritage site. “The conditions are exceptional and difficult, but we will fight all day,” he said.

Italy and Albania are also struggling with hard-to-control forest fires. After months of drought, the extreme heatwave, which affects south-eastern Europe, has already lasted for ten days.