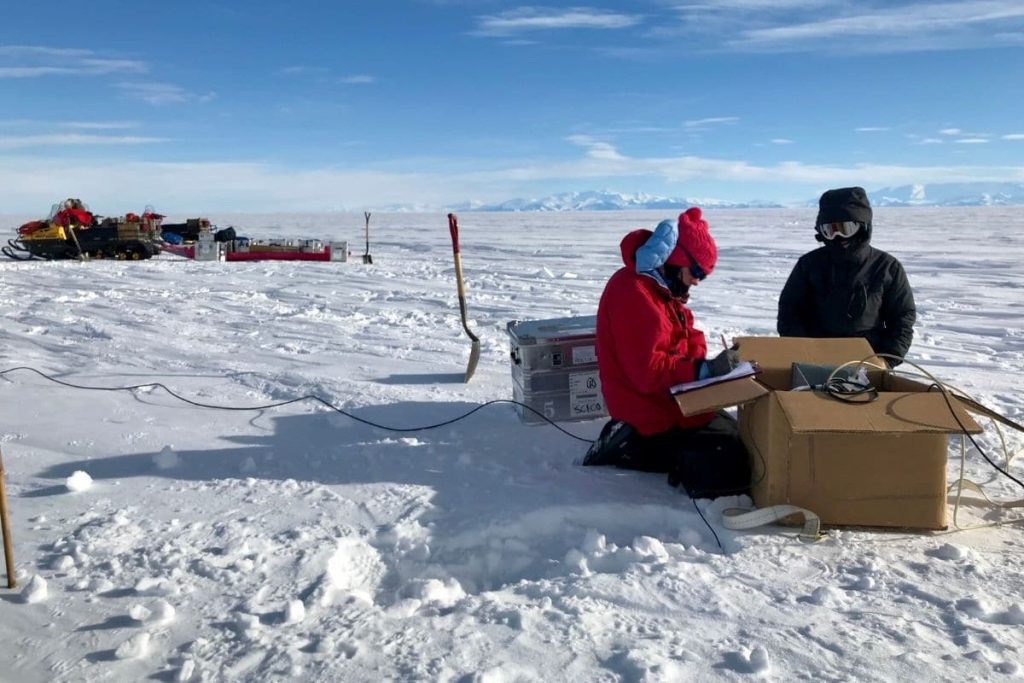 The discovery may have implications for how the frozen continent responds or may even contribute to climate change.

We know that even Antarctica, the coldest region on earth, cannot escape the effects of climate change. To fully understand how global warming is affecting the South Pole, it is very important for researchers to have data on all parts of the Antarctic ice sheet and to understand how the complex system works. A new study makes an important contribution. Because for the first time, scientists have discovered a water table under an Antarctic ice flow; something that has been suspected for a long time, but could not be confirmed before.

ice flow
Ice flows are nothing more than fast-flowing rivers of ice, which study leader Chloe Gustafson says are very important. “They transport about 90% of the Antarctic ice from the interior to the edges,” she explains. To understand what is happening beneath such an ice stream and whether groundwater could possibly be found, researchers took a closer look at the so-called Whillans Ice Stream; an ice stream about 800 meters thick.

Research sites on the Whillans Ice Stream. Electromagnetic display posts have been set up in place of the yellow markings. Image: Chloe Gustafson

New method
The researchers searched for groundwater using an electromagnetic technique called magnetotellurica. This method uses variations in the earth’s electric and magnetic fields to measure underground resistance. Ice, sediment, fresh water, salt water and rock all conduct electromagnetic energy to varying degrees. And by measuring these differences, researchers can create MRI-like maps. Although this technique is little used in a polar environment, researchers are showing its potential. Because with the help of this new method, they discovered a huge amount of groundwater in Antarctica for the first time.

For decades, scientists have studied the Antarctic ice sheet using radar and other instruments to visualize features underground. These missions discovered sedimentary basins sandwiched between ice and bedrock, among other things. The downside, however, is that aerial observations usually reveal only rough outlines of these features; not water content or other properties. So the researchers decided to take a different approach in the new study.

The discovery of groundwater is an important step. Because if its existence in Antarctica has long been suspected, it could not be established with certainty. “It was an assumption based on our understanding of how the planet works, but we hadn’t been able to measure it before,” says Fricker. In the current study, the team mapped only one ice flow. But there are many more fast-flowing rivers in Antarctica. “This suggests that groundwater likely exists under multiple Antarctic ice flows,” Gustafson said.

Climate change
The study provides insight into a previously inaccessible and unexplored area of ​​the Antarctic ice sheet and improves our understanding of how sea levels may be affected in unknown ways. Groundwater at the base of ice flows can influence their flow. And that in turn affects how ice is transported across the Antarctic continent. Additionally, the discovery could have implications for how the frozen continent responds to, or even contributes to, climate change. For example, the existence of subglacial groundwater has implications for the release of significant amounts of previously stored carbon by seawater-adapted microbes. “There may be more carbon transported towards the ocean than we thought,” says Gustafson. Additionally, if deep groundwater is pushed upward by global warming and melting ice, it could transport naturally generated geothermal heat into bedrock; this allows the ice to melt further and be propelled forward, moving the ice seaward even faster. And this while the Whillans Ice Stream already carries one meter of ice per day towards the sea.

Although many questions remain about the exact consequences of the discovery of groundwater in Antarctica and its link to climate change, the study shows the significant added value of applying electromagnetic techniques in polar environments. “I hope people start to see electromagnetism as part of the standard geophysical toolbox for Antarctica,” Gustafson said. Furthermore, the discovery of groundwater in Antarctica may also have implications for our understanding of other celestial bodies. Groundwater could actually exist under similar conditions on other planets and moons that radiate heat from their interiors. And that means what researchers have now discovered in Antarctica may be analogous to what we might find on Jupiter’s moon Europa or other ice-covered planets or moons.