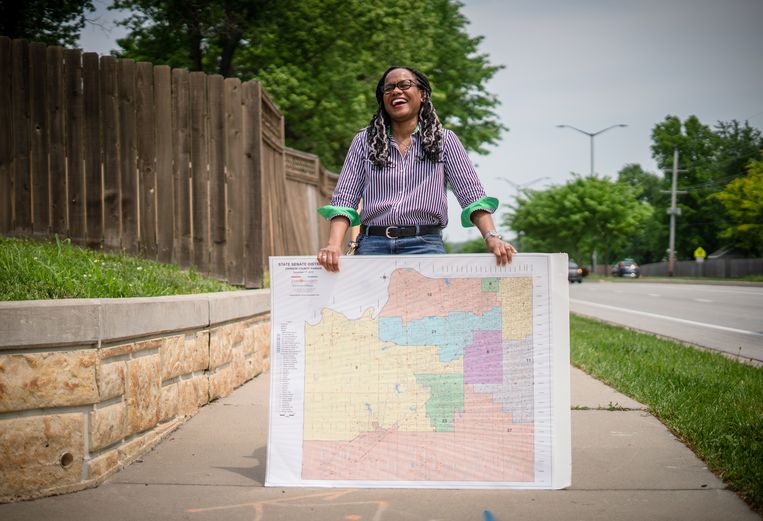 W127th Street in Olathe, Kansas is as boring as its name. A long stretch of asphalt with lawns on either side, abandoned parking lots, fences, the occasional house. But on this normal road, in this normal neighborhood, Stacey Knoell (50) sees why American democracy is broken.

“This is one of the most ethnically diverse neighborhoods in Kansas,” said Knoell, who is an active member of the Kansas Fair Maps Coalition. This organization wants to make the distribution of constituencies more equitable throughout the territory, so that no group is excluded from the electoral process. “A lot of people here are black or Latino.” This is exceptional for Kansas, where approximately 80% of the population is white. “And you can see that in their representation.”

Each US state is divided into districts, each of which elects a state and national representative. Olathe falls under the so-called “Third District”. In the previous election, this district, the only district in all of Kansas, sent a Democrat to the House of Representatives: Sharice Davids.

“But now,” Knoell says, “Republicans have made it almost impossible for a Democrat to win here.” She points around with wild arm gestures. “It is practically impossible to elect a candidate who defends his rights.” The reason: gerrymandering.

There are 435 seats in the House of Representatives, each constituency provides one delegate and must have approximately the same number of inhabitants. Since the population of the districts is subject to change, the boundaries are revised after each decennial census. The party in power in a state at the time usually leads this process, which regularly escalates into an election land grab.

In November, there are elections for the House of Representatives. The outcome will determine whether or not President Joe Biden can carry out his plans. Therefore, district boundaries are currently being fought over across the country.

Gerrymandering is a portmanteau of the name of Gerry, the governor who started it in 1812, and the word “salamander”, after the serpentine forms that customary districts sometimes take. A concentration of Democrats in an otherwise red state would instead be dismantled by Republicans, so that Democrats could not win a majority in any district. Based on factors such as ethnicity and income, they examine which street potentially belongs to which party.

Gerrymandering has been going on for more than two centuries, but the process has become more precise over the years – and more damaging, critics say. With the software it is now easier than ever.

Republicans in particular have shown little hesitation in recent decades. This resulted in maps with crazy elongated neighborhoods, meandering through all sorts of neighborhoods in different cities and towns. In the 2014 midterm elections, Republicans won 52% of the vote nationwide, while Gerrymandering won 57% of seats in the House of Representatives. They managed to thwart much of Barack Obama’s plans in Congress.

“Gerrymandering is part of the American electoral system,” said Eric McGhee, who studies the ramifications of the system at the Public Policy Institute of California. “At the end of the day, there is always a winner and a loser in a constituency, but when the cards are redrawn in favor of one party, voters may think one vote is worth more than the other. They feel that their vote has no influence and they feel placed outside the political game.

“More cards have been thrown out by judges this year than ever before,” McGhee said, “and it’s not just the Republican cards.” Moreover, many Democrats no longer fear tactics that Republicans have mastered. Democrats currently have a narrow majority in the House of Representatives. If they lose seats in November, Joe Biden will find himself in the same boat as Obama: a crippled president who gets virtually no legislation in Congress.

“Many Democratic states have also gerrymanded this year, far more than a decade ago,” McGhee said. Most striking, he says, is New York.

In New York, Democrats merged the Republican borough of Staten Island with the left-leaning borough of Brooklyn. The map shows how remarkable this is: Staten Island, indeed an island, has been glued to an area to which it is not physically connected. That way, Nicole Malliotakis, the only Republican congresswoman representing New York City, would be virtually impossible to re-elect. But the New York judge put a stop to that.

“The court found evidence that this map was drawn with political bias,” Republican Judge Patrick McAllister said. A new map has been drawn, giving the Republican candidates a chance of success. In Kansas, located in the heart of America, the exact opposite has happened.

There, Stacey Knoell and her organization also decided to challenge the new map of Kansas drawn by the Republicans. The judge ruled in their favor and ruled that the new map effectively excluded minorities. But the case ended up in Kansas Supreme Court. He found the new card acceptable. As a result, Democrats risk losing their only Kansas congressman in November.

Knoell knows how Democrats running in Kansas feel. In 2020, she herself was a candidate for local Kansas Senate. “Stacey Knoell will fight for all of us,” was her campaign slogan, “Let’s get Kansas forward!” She heads for the parking lot with her sleeves rolled up. She returns with a card as wide as her outstretched arms. “I wanted to represent this neighborhood,” she says, pointing to a colored box.

She knew in advance that it would be difficult. Knoell eventually got 20,550 votes, but her opponent, Republican Beverly Gossage, got 1,900 more. All the Democratic candidates in the Knoell neighborhood area just lost, she says on a bench in front of a row of roadside shops. A result of Gerrymandering.

“Now the Democratic residents of W127th Street are represented by a Republican woman who lives in the countryside.” Although she knew she had almost no chance, after her loss Knoell “cried for three days,” she says.

A hairdresser returning from his lunch break hears him talking about his candidacy and stops. Does he know who Stacey Knoell is? Glacially, Darren Dillard (45) looks at the map and shakes his head. “Honestly, I haven’t voted in Kansas in years,” he says, “black voters are used here as election cattle, but we get nothing in return.”

Not only in Kansas, but also in Wisconsin and Ohio, the cards have been drawn in favor of the Republicans this year. Meanwhile, the call for an impartial system is growing louder across the country. More and more states are having their maps redrawn by an independent commission to ensure that it is done fairly. This year there were 11, including California, Colorado and Michigan.

When Dillard learns from Knoell how difficult it was for her to be elected, he is shocked. “Now I regret not having voted as a black man,” he told Knoell. The only way the system can change, she says, is if people don’t lose hope and still vote, even if they think it’s pointless. “If I had gotten 1,901 more votes, I would have won.”


Before Republicans and Democrats clash on November 8 for a maximum of seats in the House of Representatives, it must first be determined internally which Democrat or Republican according to party members is the most suitable. This happens during the primaries, which have taken place in most places across the country this summer. In Massachusetts, it happens on Tuesday. The following week, the primary will take place in Delaware, New Hampshire and Rhode Island.

Because there are a lot of different tastes in the Republican Party and the Democratic Party, these primaries are also very exciting. Many candidates backed by Donald Trump, including some from the far right, have beaten moderate Republicans this summer. Within the Democratic Party, more moderate candidates have beaten progressive Democrats in many places, even in a left-leaning state like New York.

According to the latest polls from Policy It looks like the Democrats will lose their majority in the House of Representatives in November. But the The Wall Street Journal last week measured a small lead of a few percent with the Democrats. Since abortion rights were abolished in many states, many independent voters lean more towards Democrats than Republicans. Either way, the election will be very exciting because if the Democrats lose, it will be difficult for President Joe Biden to realize his plans for the next two years.