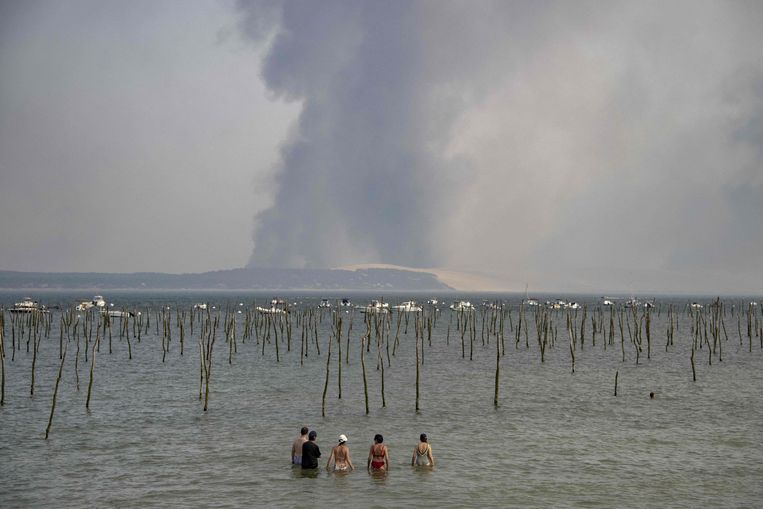 As the heat wave moved north, temperatures in Spain and Portugal fell to normal summer temperatures on Tuesday. In northern Spain, it was still 43 degrees on Monday. Firefighters in both countries, as well as in France and Greece, tried with all their might to put out dozens of forest fires.

The hottest day on record in the UK was measured when the thermometer at Heathrow airport read 40 degrees. Then the town of Coningsby in the east of England broke that new record with 40.3 degrees. The old heat record of 38.7 degrees dates from 2019.

In and around London, a dozen fires raged across dry grasslands and forests. Smoke obstructed the view of some highways. The pressure on London’s fire brigade is such that they have to call in reinforcements and equipment from other emergency services. The English are asked not to barbecue on the dry lawns.

Much of England has been warned, also for the first time, of ‘extreme heat’. At least six Britons drowned on Tuesday while cooling off in lakes and rivers. Public transport was severely disrupted, including trains that weren’t running. Flights have also been canceled due to heat damage to the runway at Luton Regional Airport. “There have been significant travel disruptions,” said Transport Minister Grant Shapps. “The infrastructure, much of which dates back to Victorian times, is simply not designed to withstand these kinds of temperatures.”

Thousands of firefighters from various southern European countries have tried, with varying degrees of success, to bring countless forest fires under control. More than thirty fires raged in Spain, particularly in the province of Zamora. So far, thousands of residents from 32 villages have had to be evacuated here.

In neighboring Portugal, more than 1,000 firefighters tried to fight five major wildfires. About fifty municipalities, mainly in the north and center of the country, were still in the danger zone on Tuesday. The heat wave has already claimed more than a thousand lives, mostly elderly people, according to the Portuguese health services.

Although Greek firefighters managed to bring more than 70 wildfires under control on Monday, the danger had not passed. On Tuesday, a new forest fire broke out in the northeast of the capital Athens, about 26 kilometers from the city. Fires have also broken out near Italian cities such as Trieste and Rome and in the Tuscany region.

In the southwest of the Gironde, French firefighters are struggling to fight two large fires that have been raging since last week. About two thousand firefighters were deployed here. Nearly 20,000 hectares were destroyed by fire. These are the most serious fires for more than thirty years. The fire ravages the countryside outside the city of Bordeaux. A man suspected of arson has since been arrested.

So far, 34,000 residents have had to leave their homes. Because the wind changed direction, there was a lot of smoke over Bordeaux on Tuesday. “It’s a monster,” regional president Jean-Luc Gleyze said of the fires. “It’s like an octopus. It grows and grows, in front and behind, because of the heat, the wind, the lack of water. It is a difficult monster to fight. Monday evening, a small fire broke out north of Bordeaux in the Médoc, reducing five campsites to ashes.

Also in Germany, a temperature of up to 40 degrees was taken into account. In the vast majority of states, ten out of sixteen, the highest wildfire alarm level is in effect.