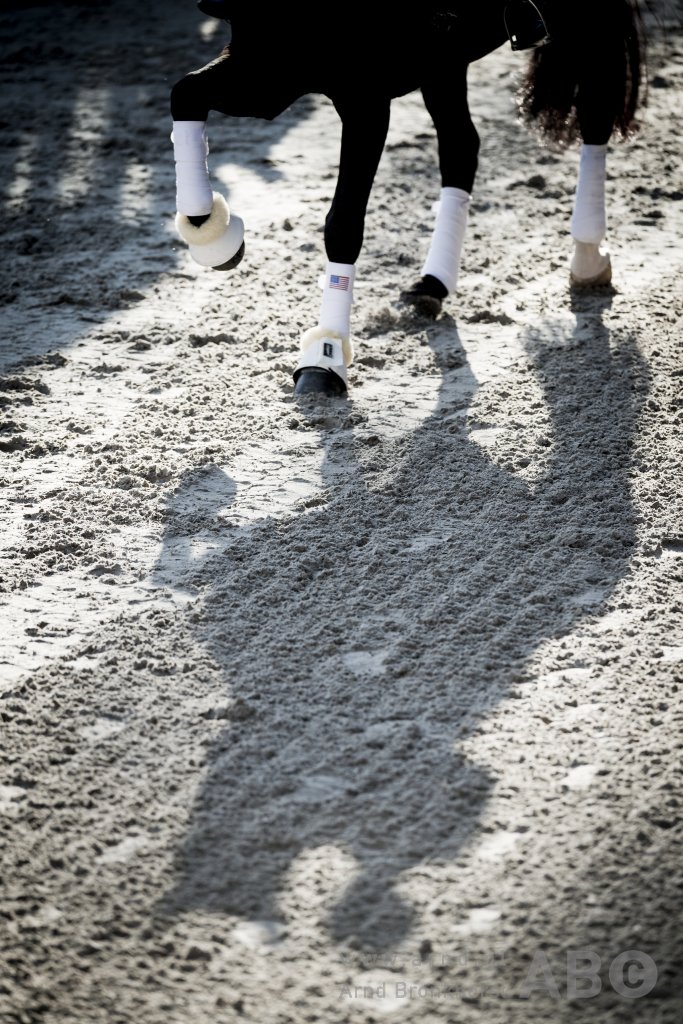 On the second day of the IBOP at De Mortel in North Brabant, Bart Bax and Marian Dorresteijn judged fifteen mares. The highest score today went to the six-year-old Kascade SR, a daughter of Dorado.

Of the fifteen mares assessed, eight were successful. Subsequently, four mares were presented for inspection of the stud-book. Three of these horses became keur or elite, one of them became a star. “We saw a good leading group,” begins Bart Bax. “But we also had to stop the assessment for a number of mares. These horses were actually too green to show their full potential and judge them as positively as possible. In order to give mares the best chance of getting good grades, it is important that they already walk on their own, walk in balance and can relax reasonably.

Kascade SR (Dorado out of Fame by Dancier, breeder ATM Roefs) owned by MJF van den Nieuwenhof – van Erp scored 84.5 points under Suus van den Nieuwenhof. “This mare was presented very well. She was very well driven from back to hand, was very obedient and silent in the lean-to. She walks actively with good amplitude and good use of the body. The trot is active with good limb technique, good reach and good use of the hind limb. For an even higher figure, it can stay a little more uphill in the widenings. The canter has a good three-stroke, good use of the hindquarters and is well carried. Here too, the mare was well mounted in front of the hand. Subsequently, Kascade SR entered with 80 points in the studbook, ster and direct keur.

a lot to go

GLOCK’s Toto Jr’s Daughter New Delypsa VDT (from Delypsa II VDT Elite EPTM-dres PROK by Wynton) from breeder Ad van de Tillaart from Zijtaart received 82.5 points today. “At 1.62 m, this mare is not the tallest, but she is a sharp mare with a lot of gait which is done very well at a walk. She makes a good shot, with good use of the body and good reach. At the trot she has a lot of tritt and a lot of technique, for an even higher note she should have a little more depth in the widening. This mare gallops with a good jump, good momentum and good lift at the withers. She can change gears very easily at a gallop. This mare was provisionally keur and became elite with this IBOP score.

Also three years Nina Ricci Apple (Just WImphof on Jewel Apple ster PROK preliminary keur by Fairytale) from breeder Nico van Maaswaal from ‘t Goy was already provisionally keur. With 81 points for her IBOP, this mare has now become the elite. “She is an impressive mare who stood out for her tactile movement. She has a very good posterior and a lot of power, but it came at the expense of support today. This mare has an active step, roomy and a lot of power. She trots in rhythm with a lot of impulse, there too her strength was noticeable. At the gallop, we saw a good jump and a good takeoff. For an even higher score, she could continue to move with the withers galloping a little more.

The fourth mare to score over 80 points is a daughter of Dream Boy Moana (except Walk Over ster IBOP-dres sport-dres PROK by Sir Sinclair) from breeders A. van Geffen and MCJ van Geffen from Nistelrode. This four year old mare ran to 80.5 points. “She is a generous mare with a nice forehead and good posture. She walked at a very decent incline and was obedient throughout the test with her ears forward. She is not the most spectacular horse, but she is very functional, likable and hardworking. She is actively walking, so she might have a little more room for a higher grade. The trot is active with good technique, in the extensions of the trot she was able to walk a little more with the withers raised today. The gallop can develop a little more amplitude, but she gallops with a lot of momentum and flexibility. Moana was then featured at IBOP.