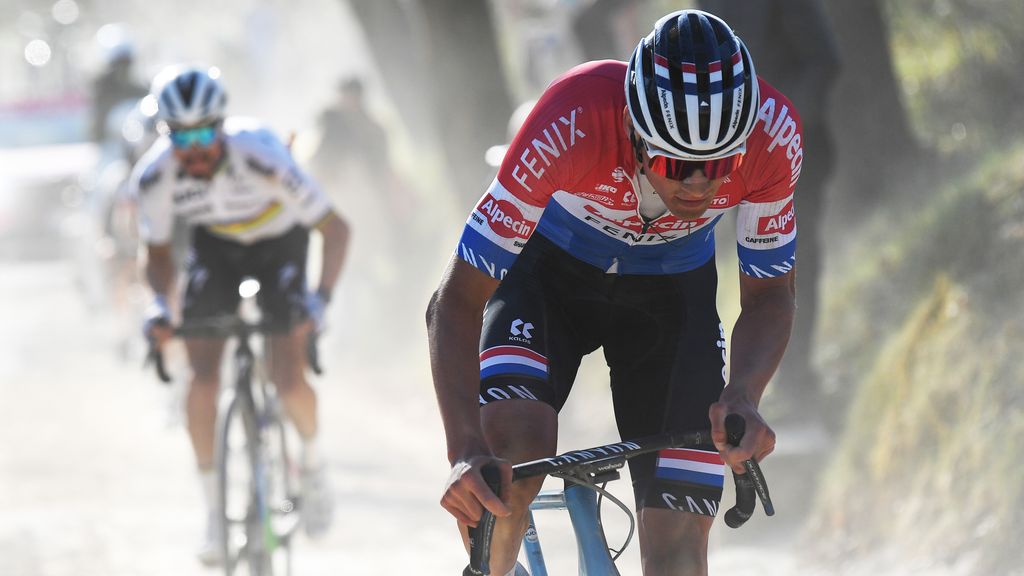 “Scared of course,” admits Jasper Ockeloen, after seeing the start list for Sunday’s first gravel racing World Cup. “Not normal. There are twenty very good pros on the list. And not the least either.”

Until Van der Poel announced his participation last week, seasoned gravel pros such as Ockeloen and Ivar Slik thought they were competing for the first rainbow jersey in the increasingly popular cycling discipline. .

“With road pros, the question is how seriously they take it,” Ockeloen thinks. “They have less experience anyway and maybe also less motivated than us. For us, this World Cup is just a main goal.”

You can safely call the United States the birthplace of gravel racing. Laurens ten Dam paved the (gravel) road of the American circuit and Ockeloen, Slik, Piotr Havik and even Thomas Dekker followed in his footsteps. With success.

Ockeloen was the best in Gravel Locos this year. And Slik won a very difficult edition of Unbound, the toughest and most prestigious gravel race on the calendar. “Dutch Mafia” is what they are called now.

“Digging is a bit old school,” says Slik. “There are no trailers, you have to take care of yourself. In America, you ride a camel with water on your back and you have your pockets full of plugs to put holes in your tire.”

“People do not buy a ticket to come and see, but to participate”, adds Ockeloen. “Before and after the race, it’s kind of a festival. These UCI races have more of a high-level sport vibe.”

On Tuesday and Wednesday, Slik (29) and Ockeloen (32) explored the World Cup route in Italy’s Veneto. The men must travel 190 kilometers from Vicenza via Padua to Citadel.

“The first hour is quite technical, with a few altimeters and even some single track pieces,” says Ockeloen. “I think it’s very cool. It will be a bit more crowded with 150 men, but I believe in it. After that it will be a lot simpler and flatter. It might just look a bit more like to a road race.”

“The course is not very difficult,” Slik said. “On gravel you don’t benefit much from the peloton riding. You just have to pedal those powers. Team tactics are also quite complicated. Normally the strongest remains, but it will be different.”

The American top is missing

It is precisely the best American players who are missing from this World Cup. No Ian Boswell or Peter Stetina. Keegan Swenson, Unbound’s number two behind Slik, is also absent from Italy after making the unexpected start of the World Cup on the road in Australia.

“Americans still have to get used to the idea,” Slik thinks. “And Laurens is not participating either.”

Judging by the tweet below, Laurens ten Dam has obligations to his footballing sons on World Cup day:

“It will be the first World Cup on clay,” adds Ockeloen. “It only exploded last week in terms of publicity and attendees. Those guys probably underestimated that. I think there will be more next year.”

“I had two big goals this year: Unbound and the world clay championship,” Slik said. “When I won Unbound, I already felt how alive it was. If you take that first rainbow jersey, you’ll stay on the books forever.”

Two rainbow jerseys under one roof?

Or could it be that two rainbow jerseys are soon hanging in the Ockeloen house? Riejanne Markus, Dutch road champion and friend of Ockeloen, will set off on the same course as the men during the World Dirt Championships for women (139.2 kilometers) on Saturday.

“In theory, it would be possible,” laughs Ockeloen. “But I think winning is not realistic for me. Of course I lose 999 of Van der Poel’s 1,000 times. I would be very happy with a top ten already. And Riejanne has never run a race gravel. In fact, she will have tomorrow.” his gravel bike. It’s more of a fun experience.”

On the first women’s clay court, Markus meets among others Elisa Longo Borghini (winner of Paris-Roubaix and Strade Bianche). And what about Pauline Ferrand-Prévot, who would like to expand her collection of rainbow jerseys – road, terrain and MTB in three disciplines.

Whatever happens, on Sunday she will be standing by the side of the road with bottles of water and gels for her boyfriend. Is this also the case the other way round?

“Well, I thought about that,” Ockeloen said dutifully. “I would love to do it, but it’s quite tiring because you feel that tension. So I don’t think it’s good preparation. But I’ll definitely take a look at it on Saturday.”

Ockeloen has won two of eleven matches in the UCI World Gravel Series, the clay-court series that culminates in the World Cup. Havik won one and Slik won several places of honor.

Terpstra is not here

And in Millau, France, Niki Terpstra was the best. Terpstra was excluded from this World Cup. He made his last race as a professional cyclist on the partly unpaved roads of Paris-Tours.

So next year? Slik sees it for himself. “Niki and I both live in Bergen and we often train with Noord-Hollands Best, a group that also includes Ten Dam, Ramon Sinkeldam and Cees Bol. “I think he got infected with the virus.

“There were even rumors that Tadej Pogacar would participate in the World Cup,” concludes Ockeloen. “But I think he should have been on the starting roster by now.” This should feel like a relief.