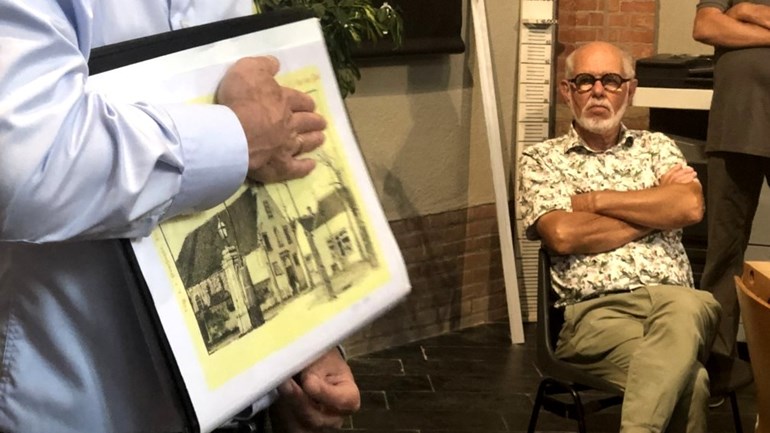 The Cuyperskerk in Sas van Gent is not the only church with tombstones. The Hulst basilica also has them, for example. “But it’s special for the Cuyperskerk, because it’s a fairly new church, built in 1892,” guide Theo Sarneel explains as he walks towards the found grave. “In 1825 it was forbidden to bury people in the church, so it’s very special that there is still a grave in this church.”

For the church floor

But Sarneel has an explanation for this. “It’s a gravestone that was reused to lay the ground for the construction of the church,” he says. “Before the Cuyperskerk was built there was a barn church here. Next to the barn church was a cemetery. The cemetery was cleaned up in 1908, because a new cemetery was built in Sas van Gent. Broken headstones or headstones for which the family was no longer paid, were recycled and used to lay the ground in the construction of the new church. “

The tombstone in the church of Sas van Gent is named after August Dierkens. “We also think, because this stone is a bit broken, that it is a stone which was simply not used any more. The inscription still reads very well, which allowed us to research Bierkens. This way you can learn a lot of facts and a nice piece of history from Sas van Gent. “

But next to this Bierkens stone there are three other similar stones. “They are also tombstones,” says Sarneel. “They are as they should be. When reusing the tombstones, it was mandatory to put the tombstones upside down, so that the inscription was not visible. Dierkens’ one is probably a mistake and placed at upside down. “

But “this error” aroused only the enthusiasm of the guide Theo Sarneel. “We already knew that there was an old wall here and stones were reused, but gravestones were used, it’s a once in a lifetime experience. ‘Once in a lifetime,’ they sometimes say. For us. , local historians, it is an ideal way to learn more about the history of Sas van Gent and to share it with other people.

Listen again to the conversation with guide Theo Sarneel below:

Guide Theo Sarneel to the tomb found in the Cuyperskerk