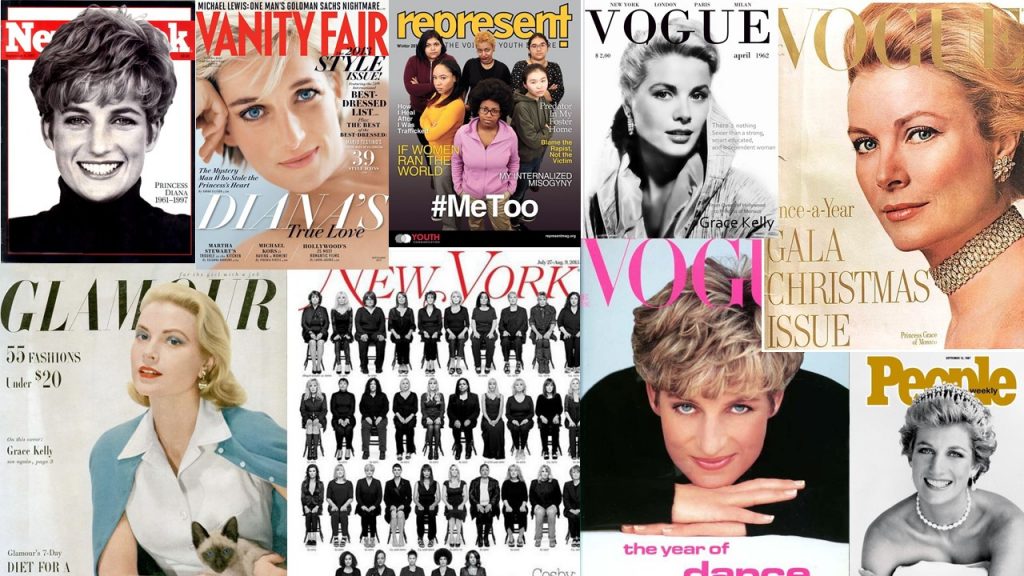 On September 14, 1982, Grace Kelly, Princess Gracia of Monaco, passed away. Unexpected, car accident, dramatic. But like so many dramatic things: a challenge for magazine makers. I was editor-in-chief of Dragonfly and we did what all the women’s magazines around the world did: the fairy tale and the end of the fairy tale in the magazine for four weeks, and of course on the cover. But we also did what no magazine anywhere in the world did: we put on a cover show. Princess Gracia has appeared on every magazine cover all over the world, from Japan to Chile to Monaco: from obligatory and boring to daring and surprising. The scene from the film, the wedding photo, the family photo and, in a small insert, a photo of the accident.

When you talk about magazines and ‘love for printing‘, sooner or later (and usually sooner) you will get to the front page of the magazine, the cover: a well-organized whole, delimited, rectangular, familiar format, the starting points are in the whole world the same goes for the competition. So if you want to stand out, give your creativity a boost. But remember, it was Grace Kelly, it was 1982: no internet, Google what the hell do you mean by google? Nevertheless, we managed to collect more than 60 covers (also international). Someone knew someone in Paris and could fix something. So an aunt of the art director lived in Ohio Yes, there was something to be done by mail. Four weeks later, the walls were full, a pleasure to watch.

On August 31, 1997, Princess Diana passed away, Lady D. Unexpected, car accident, dramatic. All over the world again, all the women’s magazines again, now all these gossip magazines and all these glossies. Some magazines had Diana’s cover for eight weeks. Of course there was another exhibition, another big international press party, great to see what all those art directors and editors had done with that one page of paper. But I remember having to choose, there was a huge offer.

There are sometimes worldwide events to which every magazine editor around the world responds from their own magazine culture, as part of the formula. Only with pictures or with only text, wonderful screams or enjoying the tongue in the cheek. And it’s still nice to see all these expressions next to each other, on a wall it works best. As far as I’m concerned, it started with Princess Gracia: a time when you had to rely on aunts and ex-girlfriends to pick up samples by mail. ‘The print was the only hero ‘. But I admit, now in 2020: sorry sister from Vietnam, sorry ex from Hungary, thank you very much for the tip, no you don’t have to send this nice blanket, it’s already in my box, I got it from three sides.

The printing possibilities remain unique, hence the “love” and rebirth after rebirth, but I admit: the internet is not so bad. (Shut up, I know, understatement). The Internet has also led to a considerable expansion of exhibition possibilities. If there had been the Internet in 1982, I could have shown 800 international covers of Gracia. Eighty framed pieces in the Oranje Museum and these 720 other click, click, click covers in a separate room. Princess Diana ditto.

An exhibition of all the magazine covers on the January 1, 2000 theme, all over the world? The great millennium cover exhibit? It was a wonderful view and endless digi work. And now, of course, do it: a global exhibition of Trump’s best covers of the past four years. Including the front pages of newspapers, as newspapers have now passed all magazine laws. In the Trump Tower, the top 100 on the wall, from the building outside the Top-1000. Do it now: an exhibition of the best covers from Black Lives Matter. Do it now: the best # metoo covers. Now: a Dutch blanket exhibition with Zwarte Piet, through the years. Museum of the 20th century! Opening remarks from … no, let’s not say it. I can name ten other ideas, did you say twenty? Okay, okay, we’ll do twenty.

But the point is clear. Host this print cover exhibition, live your “love for printing”, host this party, get inspired, but also exploit all the possibilities of digi. Make Princess Gracia jealous.

So what do we expect in a year? The international exhibition of blankets with face mask. The corridors of the hospital are full. Six months ago I thought: do it, with a little bit of effort there will probably be a hundred blankets. Now I say, pick the hundred nicest and put the other two thousand in a row. From New Zealand to Italy via Belgium and China. Subtitle: Top-100 and Top-2000. Or go by topic. Limit yourself to covers with caps printed in text: lines of poetry, slogans. Or just with masks of football clubs, fashion brands, place names, zoos, drink brands, celebrities, love scenes. Humor, come on. I’ve seen a hood with the movie star’s tongue. I saw a cleft lip facial mask. I saw the mouth hide bad teeth. I saw lips lips, I saw pierced tongues. I saw the snake tongue mouth mask. I saw a culi tray with a mouthpiece for a cake. I saw Playboy wearing only a face mask. I saw … I saw …

This article was written by “ magazine doctor ” Rob van Vuure and previously appeared in MarketingTribune 20, 2020.