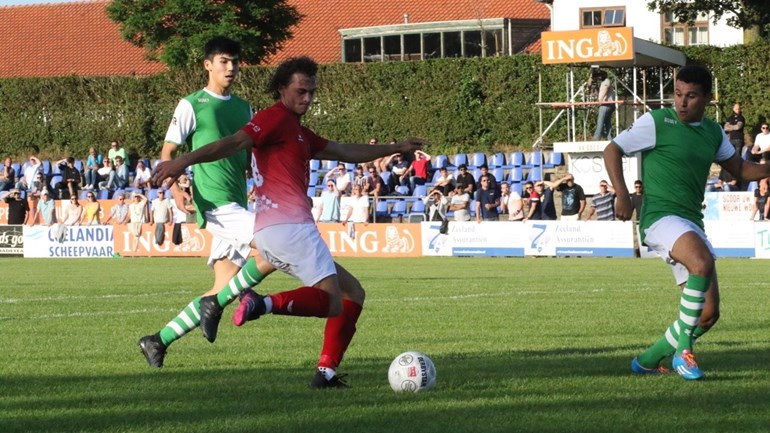 Who’s not here, it’s Ralph de Kok. The defender was injured last week against Ter Leede. It is not yet clear how long De Kok will be out of circulation. “There is still fluid in his knee so no scan can be done yet,” said coach Kevin Hollander.

After De Kok retired, GOES gave Ter Leede a 0-1 lead and lost 3-2. “We started well, we scored a goal early, but after Ralph’s injury we seemed to lose him.”

As a result, GOES is still waiting for its first victory after five matches in the third division. The first three matches were drawn, the last two rounds the team lost to Hollander. “I want to see the GOES from the first three games again,” said Hollander, who thought his team had more defensive security then.

The good news is that GOES can once again have left wing defender Roemeratoe against DVS’33. “Sylvio Hage also received the green light from the physiotherapist,” said Hollander about the central striker who was ill and injured. Hage signed against the Harkemase Boys (3-3) for the first goal of the new season for the Bevelanders.

In addition, Guillaume Clinckemaillie is back on the sofa. The Belgian striker had to deal with a hamstring injury. On the other hand, Francis Kabwe Manengela – scorer last week of one of two hits against Ter Leede – remains a question mark for GOES.

Opponent DVS’33 has collected four points in the first four league games. Ermelo’s side started the season with a win, but are twelfth in a row after two losses. GOES has played one more game and is number 16 in the Derde Divisie with three points. Last season GOES lost 5-1 to DVS’33.

The progress of the GOES-DVS’33 competition can be followed on Saturday from 2:30 p.m. via Twitter @omroepzldsport. A summary of the match appears on www.omroepzeeland.nl/sport and can be seen on Sunday from 6.10 p.m. in a new Omroep Zeeland Sport.