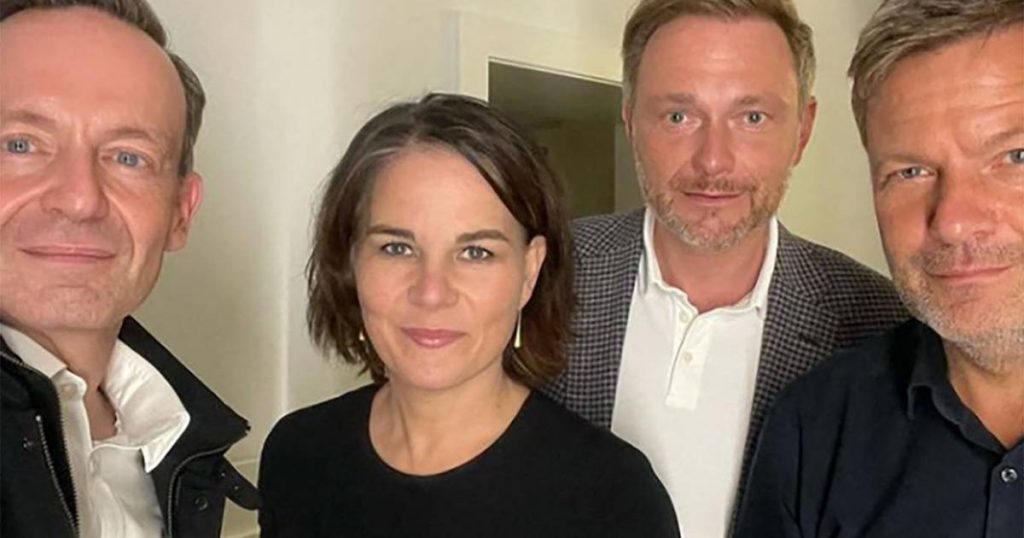 Although the German Liberals (FDP) are in talks with the Greens on government participation, possibly with the winner of the SPD election, they are not yet ruling out a coalition with the loser CDU / CSU.

In the talks, the FDP, which finished fourth in the Bundestag election, clings to the possibility of a so-called Jamaican coalition with the CDU / CSU and the Greens (named after the black, yellow and green colors of the Jamaican flag) . “In terms of the program, we are closer to the Union of the CDU and the CSU, but we will discuss with all the other parties with an open mind,” said FDP faction Vice President Alexander Count Lambsdorf. in the Bundestag in an interview with the Bundestag. General of Augsburg.

The leaders of the FDP and the Greens met for the first time on Tuesday evening on government options and building bridges between the two parties. Opinions are sometimes very different, especially in matters of economic and environmental policy. The FDP opposes the Greens’ plans for tax increases (especially for high incomes) and to achieve climate neutrality by 2030 instead of 2045. “After discussions with the Greens, those with the SPD and the CDU / CSU will follow, ”Lambsdorf said.

FDP chairman Michael Theurer made a similar statement on the Deutschlandfunk radio news channel. “A Jamaican coalition is not yet on the table,” he said. Theurer, also vice-president in the Bundestag, referred to party leader Christian Lindner, who recently made it clear that the liberals would prefer such a coalition with the CDU / CSU. Moreover, Theurer does not rule out the possibility of continuing the grand coalition between the SPD and the CDU / CSU, but then under the leadership of the old party instead of the Christian Democrats as in the past four years.

According to FDP secretary general Volker Wissing, the liberals will meet with the Greens again on Friday, but in a more substantial manner, and exploratory talks are scheduled for Saturday and Sunday with the Christians and the Social Democrats respectively.

The Greens, who finished third in the election, see the results as “a clear mandate for a progressive government,” Chancellor candidate Annalena Baerbock said on Wednesday. She was referring to a traffic light coalition with the election winner SPD (red) and the FDP (yellow).

Alliance 90 / The Greens are skeptical of talks with conservative Christian Democrats and the SPD over a Jamaican coalition. “The CDU / CSU must first organize itself and is now unable to negotiate,” Vice-President Ricarda Lang told the Deutschlandfunk news channel. She also advocates a traffic light coalition with the SPD because, according to her, the Greens have the most common common ground with the Social Democrats.

Ricarda Lang, vice-president of the Greens

Bundestag member and green energy expert Oliver Krischer agrees. “The Union (of the two fraternal parties) now seems to be mainly concerned with itself and that for a longer period, which prevents me from imagining how they would achieve it,” he replied. WDR5 radio. However, he does not rule out negotiations with the Christian Democrats. “If there were serious conversations, it would depend on the case and not on sympathy or dislike for certain people.”

The youth wing of the Greens called on the party leadership to clearly reject a Jamaican coalition with the Union. “Under no circumstances can we help the party that was explicitly rejected again. The CDU / CSU has proven for 16 years that it cannot improve anything, ”spokesman Georg Kurz said in the New Osnabrück Diary.

CDU / CSU chancellor candidate Armin Laschet wants to hold talks with the Greens and the Liberals in view of a Jamaican coalition, despite the historic defeat of the so-called Union in the Bundestag elections on Sunday. According to Laschet, the election result was so close that “no party” can draw a government mandate from it. “Not us and the SPD either,” he said Monday afternoon in his first post-election speech. ,,That is why we are also having discussions with other parties oto see how a new government can be formed.

The center-left The SPD won the elections with 25.7% of the vote against 24.1% for the conservative union CDU and its Bavarian sister party CSU. the dpushing Laschet to recognize electoral defeat and join the opposition is on the rise. However, the question of whether the CDU / CSU should be in opposition has not yet been answered, he said.

Since 2017, the leader of the CDU party, Laschet, has led a black and yellow coalition with liberals in the state of North Rhine-Westphalia (NRW), bordering the Netherlands, where he is prime minister. He said ahead of the Bundestag elections and the battle for the succession of party colleague Angela Merkel as chancellor that he did not want to return to NRW after the election. He was also no longer a CDU candidate in his constituency of Aachen.