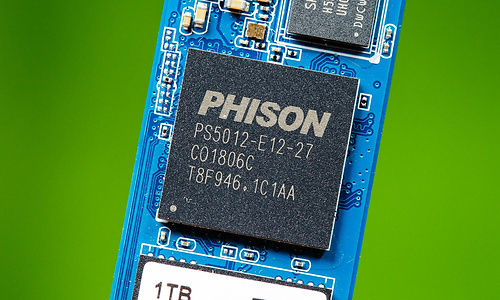 Sébastien Jean, technical director at the manufacturer of SSD controllers Philo, spoke about his expectations for future generations of SSDs in interviews last year. He talked about, among other things, an increase in power consumption and heat generation, and that the need for active cooling of SSDs is not inconceivable in the future. In more recent interviews Sébastien goes into more detail on this subject.

With expected speeds of over 10 gigabytes per second, we will see significant performance gains with the next generation of m.2 SSDs using PCIe 5.0. Phison already has some ideas for making SSDs run more efficiently, but Sebastien expects temperatures to rise anyway. SSD controllers can handle this; temperatures up to 125 degrees Celsius should not be a problem. For NAND chips, the maximum temperature is much lower: between 70 and 85 degrees.

Sebastien compares his expectations with the history of video cards: first heatsinks, then a small fan and finally extensive cooling solutions. On the other hand, successors to the PCIe 5.0 connection are already in development which allow better heat conduction through the motherboard, so that only passive heatsinks might suffice.

So it can always go both ways with m.2 SSDs. In any case, a few companies have already prepared: ElecGear and Jonsbo announced SSD coolers with a small fan in December. Small form factor air cooling isn’t known for its quietness, so maybe the TeamGroup all-in-one water cooling announced last week is a better fit. The first “gen-5” SSDs are expected later this year.