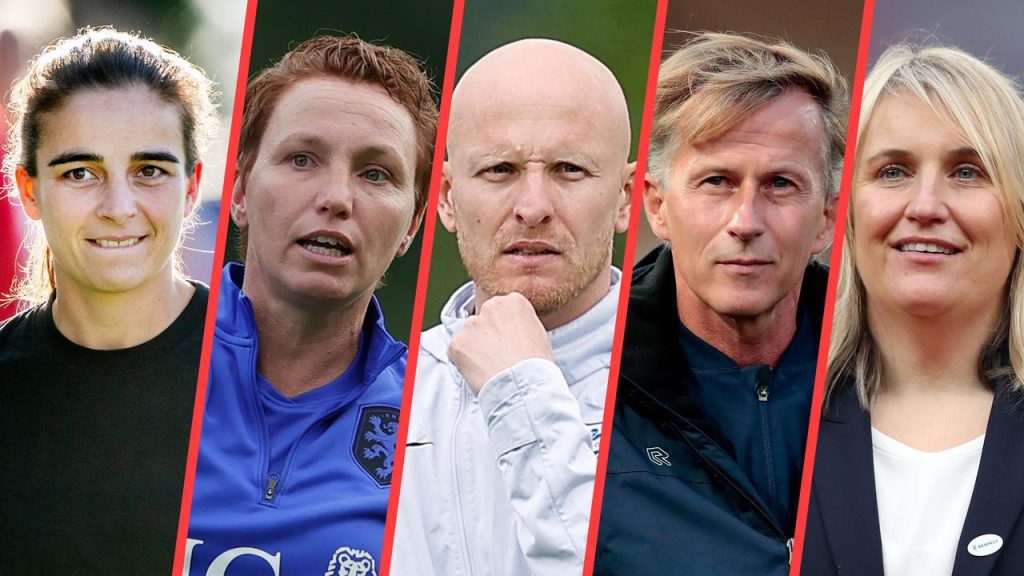 After the resignation of Mark Parsons, the KNVB is looking for a new national coach for the Orange Women. Research is urgent work, as the Netherlands will play a decisive World Cup qualifier in three weeks. These names are often mentioned as successors to Parsons.

In the nine-month search for a successor to Sarina Wiegman’s success, the KNVB was looking for a “Sarina-plus” last year. “Someone who can top Sarina, who understands women’s football well,” KNVB director Jan Dirk van der Zee told the newspaper. LIT. The union ended up with Parsons after several cancellations. It turned out not to be a “Sarina-plus”, but a “Mark-minus”, resulting in a disastrous European Championship.

With Arjan Veurink, the KNVB comes closest to Wiegman. The Ommenaar native was The Hague’s assistant coach with Orange Women for 4.5 years. He also accompanied her to England last year as her right-hand man. The result is impressive: last month, “The Three Lionesses” became European champions in their own country.

Veurink is considered the tactical mastermind behind Wiegman, but he also succeeded on his own two feet. As coach of record champion FC Twente, he won four national titles from 2012 to 2016. Moreover, Veurink made no secret of the fact that he would one day become a national women’s football coach. He is also very popular with Orange internationals.

“He has the qualities, knowledge and experience of the Netherlands,” said former international Leonne Stentler, analyst at NOS and ESPN. “He had also been Sarina’s easiest successor, but he was not allowed to attend the highest coaching education right before Wiegman’s departure from the KNVB.”

“Even for now it’s an interesting name. But if I was him I wouldn’t have done it. In eleven months you can also win the world title with England. Why in the name of God, would you leave and go into a union where they snored when you could have been groomed to take over?”

When asked, the Veurink management office does not want to say anything about the rumors surrounding a move to the Netherlands. He still has a permanent contract with the English Football Federation (FA). After the European Championship victory, the FA said they wanted to terminate and extend Wiegman’s contract.

Arjan Veurink (left) has been Sarina Wiegman’s right-hand man for years and a logical candidate for national training for the Orange team.

Jonker was one of the coaches who canceled last year for national training with the Orange Women. He wanted to be on the pitch with players every day, which is not possible with a national team. However, the former assistant to Louis van Gaal at FC Barcelona and Bayern Munich seems to be on the rise again.

Jonker is currently without a club after leaving division club Telstar Keuken Kampioen last summer. The Amsterdammer, who has coached clubs such as VfL Wolfsburg, Willem II and MVV, also has experience in women’s football: at the start of this century he was national coach of Orange Women for a year.

Additionally, Jonker follows women’s football closely and enjoys working with women. “You can very well build something with women. They are very dedicated,” he said during the European Championship in the NOS programme. Studio England.

More than a month later, Jonker doesn’t want to add anything to that. “I know I’m often mentioned as the new national coach, but I have nothing to say about that,” he told NU.nl on Monday.

Stentler sees a potential national coach in Jonker. “He has personally developed the sport and understands how to work with women’s teams. At the same time, he has also proven himself in men’s football. He has a very interesting profile.”

It’s an urgent job for the KNVB to find a new national coach as the Orange Women will play a crucial World Cup qualifier against Iceland on September 6. The Netherlands must win this game in Utrecht to qualify directly for next year’s World Cup in Australia and New Zealand. Otherwise, the play-offs remain for the losing World Cup finalist from three years ago.

In the race against time, it is easier for the KNVB in the short term to bring assistant Jessica Torny forward. She is one of five female coaches in the Netherlands with the highest coaching qualifications, alongside Wiegman, Vera Pauw, Hesterine de Reus and Renée Slegers. The KNVB have been interested for some time in the former international, who has been working as a national youth team coach for several years.

Yet there are also doubts about Torny. As Parsons’ assistant, she was partly responsible for the European Championship debacle, after which the Dutch side were knocked out in the quarter-finals as defending champions. Moreover, she thanked her for being a national coach last year because she did not feel ready for it yet.

“I feel like not everyone around Orange is convinced about Torny,” Stentler says. “There also seem to be doubts whether she is ready, otherwise she would have been pushed forward. And it’s not about Torny either. She seems to be the logical coach for the next generation. “

Torny is currently active with the Netherlands Under-20s at the World Cup in Costa Rica. With the talents, she won 3-0 against the United States on the night of Sunday to Monday (Dutch time), making Orange almost certain of a place in the quarter-finals.

Jessica Torny can be moved as Orange Women’s assistant.

Emma Hayes is Stentler’s favorite. The Briton is a famous coach in England. She has been in charge of the Chelsea women’s team for ten years, with which she became champions of the Women’s Super League, the best competition in the world for the past three seasons.

“She would be top of my list,” Stentler says. “I think she’s a fantastic coach. She’s someone who knows how to win a group and make every player better. She’s also tactically strong. And she’s a top woman, I think. that’s so important.”

Still, Hayes’ arrival at Zeist seems unlikely: she still has an ongoing contract with Chelsea and has already started preparations with the Londoners, considered one of the best club teams in the world.

“But every successful coach is open to the idea of ​​coaching a country like the Netherlands. They are on the top of the world,” Stentler knows. “The only question is his contractual situation. Can this be bought for the KNVB?”

Stentler sees another reason why Hayes is not the new national coach. “Torny is the horse that the KNVB has been betting on for years. She has to take over in the long term and therefore remain an assistant now. If Emma wants to bring in her own assistant, you are sabotaging your own process.”

Emma Hayes is one of the best coaches in women’s football.

She hasn’t been active in the Netherlands for years, but in Sweden Renée Slegers is having a stormy development as a coach. The former Dutch national team international has been in charge of Rosengard since last year. In her first season, she immediately became a national champion and she also won the cup with the top Swedish club.

Ahead of the European Championship, Slegers said he was open to national training with Orange. “I would consider it a great honor,” she said. The Telegraph. She is happy only in Sweden, where she has lived for eleven years.

Stentler thinks Slegers is a “very attractive option”. “I hope she becomes the national coach in the future. She’s very credible in what she does. Van Gaal and Jonker have that too. If you’re credible then you’re almost there. The rest will come.”

According to Stentler, the fact that Slegers was only head coach of a top club for a year is not in his favour. “She just watched. But if she does this for another year, I say, please bring her in.”

In view of the decisive qualification for the World Cup against Iceland, the KNVB wants to appoint a successor to Parsons in the “very short” term. On September 2, the Orange Women will play a friendly match against Scotland.

Renée Slegers is making a name for herself in Sweden.